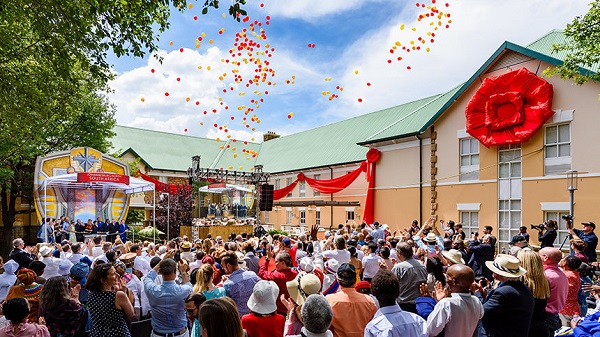 Well, no surprise to see the Diminutive One show up in S. Africa for the perfunctory ribbon yanking of a second “ideal” building to add to the empty Joburg org just down the way…

Why would the “ecclesiastical leader of the scientology religion” fly 12,000 miles to South Africa two days before Christmas and schedule the “New Year’s” event for 16 December, two weeks before New Years?

Best answer: because he planned a little vacation for himself in S. Africa. What a great opportunity to make a trip to the furthest reaches of earth, away from the pesky media, courts and whistle-blowers that keep him locked inside his compounds and afraid to step into public view without security guards, barbed wire fences and rows of bushes and trees to keep the “wogs” at bay.

When I originally saw the date scheduled for the New Year’s event I suspected it was so Dave could do something over XMas. Then when I saw the Joburg N opening scheduled for 23 Dec my suspicions were confirmed. Remember, Dave didn’t make the trip to open Pretoria ideal org (the only other ones he didn’t ribbon-yank are Moscow and Berlin — he is afraid he might be detained if he visits those countries). Apparently Pretoria didn’t coincide well enough with his social calendar.

Interesting (and somewhat satisfying) that he has to go to such lengths to “escape.”

But back to the supposed reason for his trip.  They gathered together the few hundred scientologists that remain in S. Africa (of course, scientology claims it was 1500 –the photos on their own website like the one above — tell a different story). Even if they could round up 1500 people that would be pathetic given their oft-repeated quote about how this is where the next great civilization on earth is rising…  And my, how the stature of the invited ribbon yankers has fallen. Back when he yanked the Jobur ribbon in 2004 (13 years and counting — still haven’t cleared their street, let alone neighborhood) there were actual officials in attendance. Now they scrape together whoever they can find that will agree to appear and publicly associate with scientology, even if nobody knows who they are… Must be demeaning for the leader of the fastest growing religion in the universe to have to associate with the riff-raff. In his mind, he should be being joined by the President and the head of the Supreme Court.

That picture tells a thousand words, but we could not overlook another Shermanspeak touch of genius concocted for this august occasion. Miscavige actually said this:

“Should anyone ask what it means to follow an LRH dream from ‘One Man, One Vote’ to One Nation, One Purpose and from African power to African pride and Africa forever to Africa alive, well, all you have to do is consider those words ‘eternally Africa’ and ‘endlessly Africa,’ because herein lies our Lion’s Gate to Infinity’s door.”

I am sure Funny or Die, SNL, The Onion, John Oliver or someone is going to parody this sooner or later.

And finally, this bald-faced lie:

The opening of the new Church of Scientology Johannesburg North comes during a period of tremendous expansion for the religion with more than 60 new Churches of Scientology from Los Angeles to Tampa, London to Milan, Tel Aviv to Tokyo and Kaohsiung to Bogotá. Over the past decade, those openings have driven worldwide expansion for the religion to a rate surpassing the previous 50 years combined

They just keep claiming it and people inside the bubble (some at least) apparently buy it.

The first sentence is a complete lie. The number of scientology churches has DIMINISHED. Miscavige has closed and combined orgs into “ideal” buildings. There is LESS scientology now than when his ideal org program launched. And the “NEW” ones have been in Inglewood and Harlem in a very failed attempt to infiltrate African American society in the US, and in Taiwan. Period.  Every other church of scientology has been hanging on since the 70’s (80’s at the latest)… The equation is: Old org moved to a new building = new church. Even the ORIGINAL scientology “church” in Los Angeles, the same one that has been there since 1954 is now one of the “new Churches” because they renovated the building they have been in since the late 70’s.

And as for “Over the past decade, those openings have driven worldwide expansion for the religion to a rate surpassing the previous 50 years combined” all I can say is: Hahahahaha. Provable Bullshit.