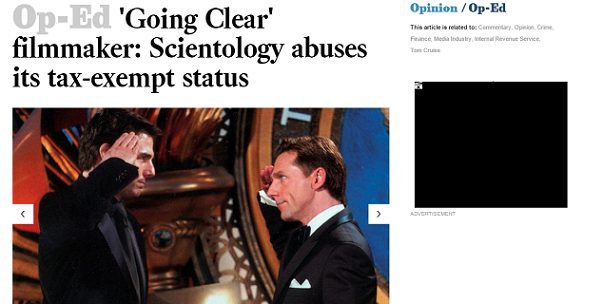 If you have not done so already, head over to Tony Ortega’s site and read his posting about Scientology’s Tax Exempt status.

Prompted by the OpEd piece Alex Gibney wrote in the LA Times, and with some excellent advice from Jeffrey Augustine, it lays out what you can do that is most likely to be EFFECTIVE in changing the way the US Government is allowing its citizens to subsidize Miscavige paying PI’s $10,000 a WEEK to follow and spy on his father.

The direction about complaining directly to the IRS supplements my recommendation to contact your elected representatives.

If you want to DO something to change the situation, these are exact steps you can take that are FAR more likely to achieve something than signing a “petition.”

People are quite rightly outraged that this “church” is abusing people with tax free money.

Many voices raised in protest can change that. So, if you have the opportunity, add your voice to the choir.

Following is a section of Alex’s extremely well thought out Op Ed that captures the overall message: