Everyone familiar with scientology knows there are two things that really get their hackles up. Saying something they consider unkind about Tom Cruise, or saying something mean about David Miscavige. It does not matter whether what is said is true, if it casts either of them in a bad light, the STAND Minions are activated to come out with pencils blazing, firing off volleys of accusations of bigotry and hate. 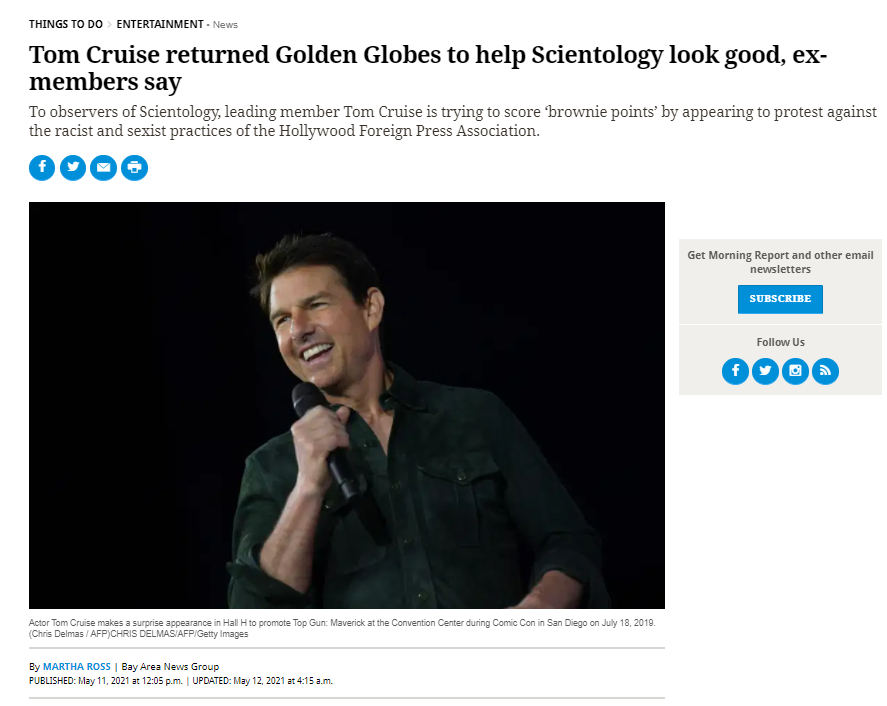 Here is some of what she said that so incensed the Standbots:

While the move was widely applauded, some people who follow Cruise’s involvement in the Church of Scientology said the actor doesn’t deserve praise for what they’re calling a cynical public relations move, noting that he’s one of the leading members of an organization that has faced multiple allegations over the decades that it engages in homophobia, forced labor, physical abuse, sexual abuse against children, financial exploitation of members, and retaliation and harassment of people who leave the organization. The allegations have come in lawsuits, investigative news reports, books and documentary films such as the Emmy-winning “Going Clear,” released in 2015.

She also had the temerity to quote Yashar Ali and me on the subject. Including this:

“When is he going to return his IAS Freedom Medal to protest the horrendous abuses of Scientology? They’re far more egregious than the HFPA…” Rinder tweeted. 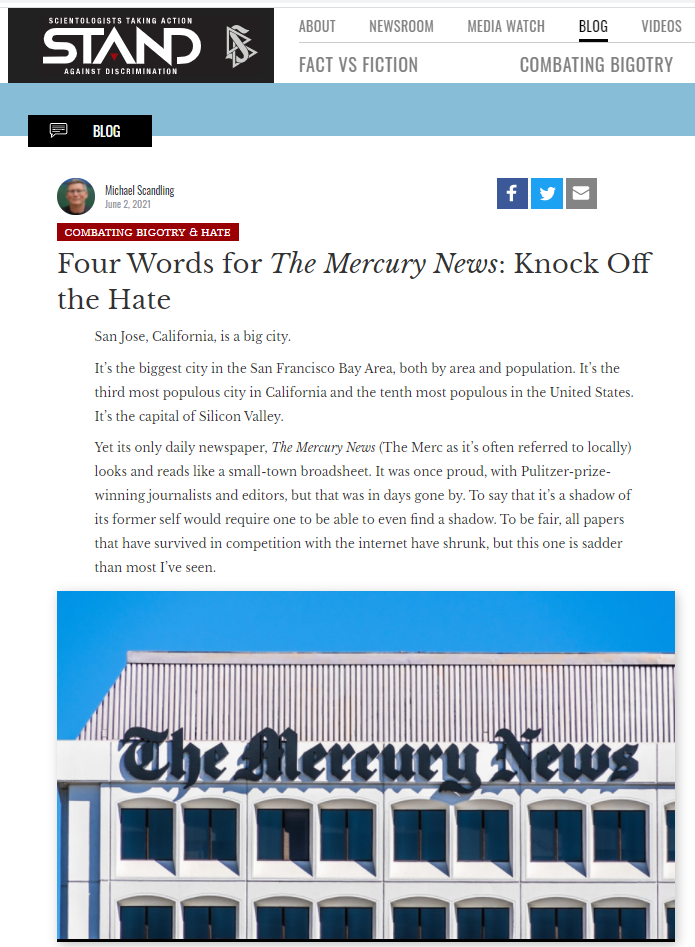 After the usual blah blah trying to sound educated and objective, Michael Scandling gets down to the business of hate.

Martha Ross came to my attention because in a recent story she slandered an actor for taking a socially responsible step to stand against bigotry, one which she decried as being “bad.”

Because he’s a Scientologist.

They don’t name Tom Cruise. That would require clearance from the highest levels.

He then goes on a rant about how she used “experts” who are not expert so have no right to have an opinion. Though I probably have more training and certainly a lot more experience in scientology than Michael Scandling has either in scientology or in the media, but the irony of him passing judgment on the media is apparently lost on him.

Ross’ hate, thinly disguised as gossip, is not doing the public a service and is not worthy of public trust.

What qualifies as “hate” is apparently stating that scientology “has faced multiple allegations over the decades that it engages in homophobia, forced labor, physical abuse, sexual abuse against children, financial exploitation of members, and retaliation and harassment of people who leave the organization. The allegations have come in lawsuits, investigative news reports, books and documentary films such as the Emmy-winning “Going Clear,” released in 2015.”

This is “hate, thinly disguised as gossip”?

I’m a Scientologist and I don’t appreciate my religion, and me by extension, being mocked by snarky fake news.

My advice to Martha Ross and the editorial board of The Mercury News would be to just stop. There are adequate opportunities to find out the truth about Scientology. There is no excuse not to. This presentation of L. Ron Hubbard’s essay “What Is Greatness?” would be a good place to start.

Then print the truth. Cut the hate. Skip the fake news.

What is Greatness? Seriously dude? One of the most provably fake articles Ron ever penned? Love your enemies despite all reasons not to?

But as I said, Mr. Cruise is a touchy subject. So, STAND doubled down and fired off another salvo. 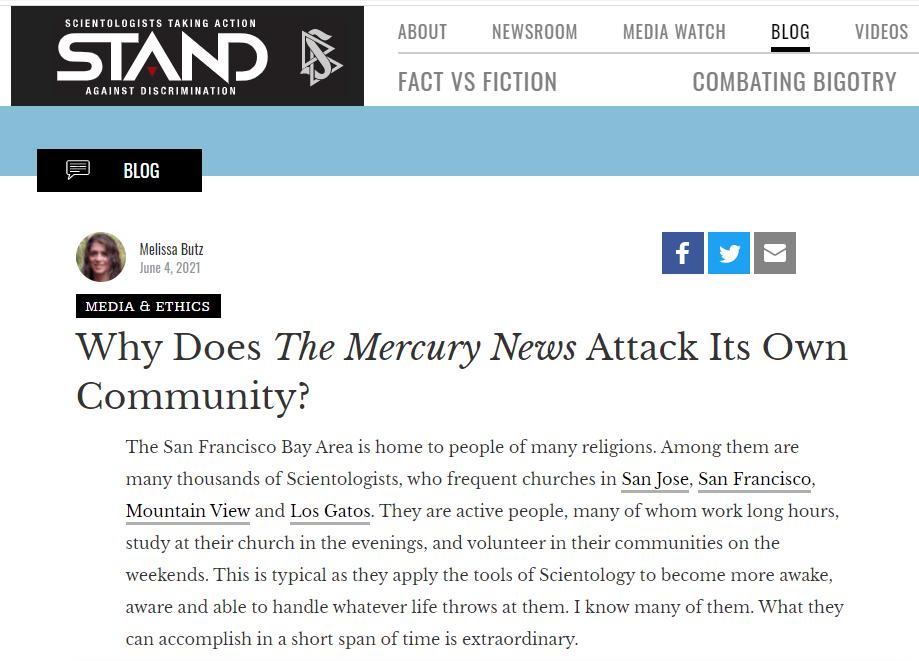 Melissa Butz chimes in with some pure “we are victims” and we are “just like other religions.”

This is an area with one of the highest concentrations of Scientologists in the world. Martha Ross and The Mercury News ignore the members of their own community who are right under their noses, IN THEIR OWN TOWN, and continually deal them a slap in the face.

Who exactly do they think they represent?

With easy access to so many Scientologists and to our partners in the interfaith community with whom we work, this newspaper would be wise to start actually representing religious communities in the Bay Area and drop their allegiance to haters on the internet fringe.

I wonder what would happen if Martha Ross or anyone from the media asked for an interview and to be given access to scientology orgs?

They are no more “part of the community” than fleas are part of a dog. They may be there in small numbers, but nobody wants them and when the flea powder is applied it’s not attacking the dog. Though if the fleas had a STAND League they would no doubt claim it was.

But they still weren’t done.

In a major blow, Stuart Rosenbaum canceled his subscription! 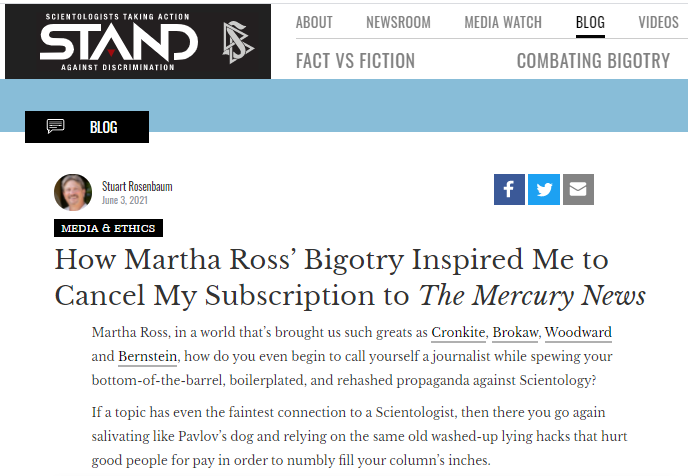 He relies on the well-worn “You should get the REAL story” approach:

If you ever endeavor to be a true journalist, you’ll have to take a bolder approach, do something out of the box, wild and crazy, that’s rarely done by reporters of your grade: tell the truth. Tell the whole story about the scores of Northern California Scientologists

And then goes on a roll about handing out WTH booklets? The “non-religious” booklet is apparently religious now.

Again, I wonder what would happen if a reporter asked for access to the “scores” of Northern California scientologists? Asked to see how much money they had given to scientology? Asked about disconnection and destruction of families. Asked about the proven lies of L. Ron Hubbard. Asked about the abuses in the Sea Org…

Martha Ross obviously touched a nerve. This sort of reaction is what stirs good journalists to do even more. I have a feeling this is not the last we have heard from Martha Ross on the subject of scientology.