This is the sort of stuff scientology churns out to try to smear and discredit those who expose their abuses.

The author, Rodger Clark, is a “STAND Blogger”. I happened to notice this article on the Patheos site, and found it was simply a reprint of the blog article on the STAND site.  The text and even the image on Patheos are identical to this propaganda from STAND. 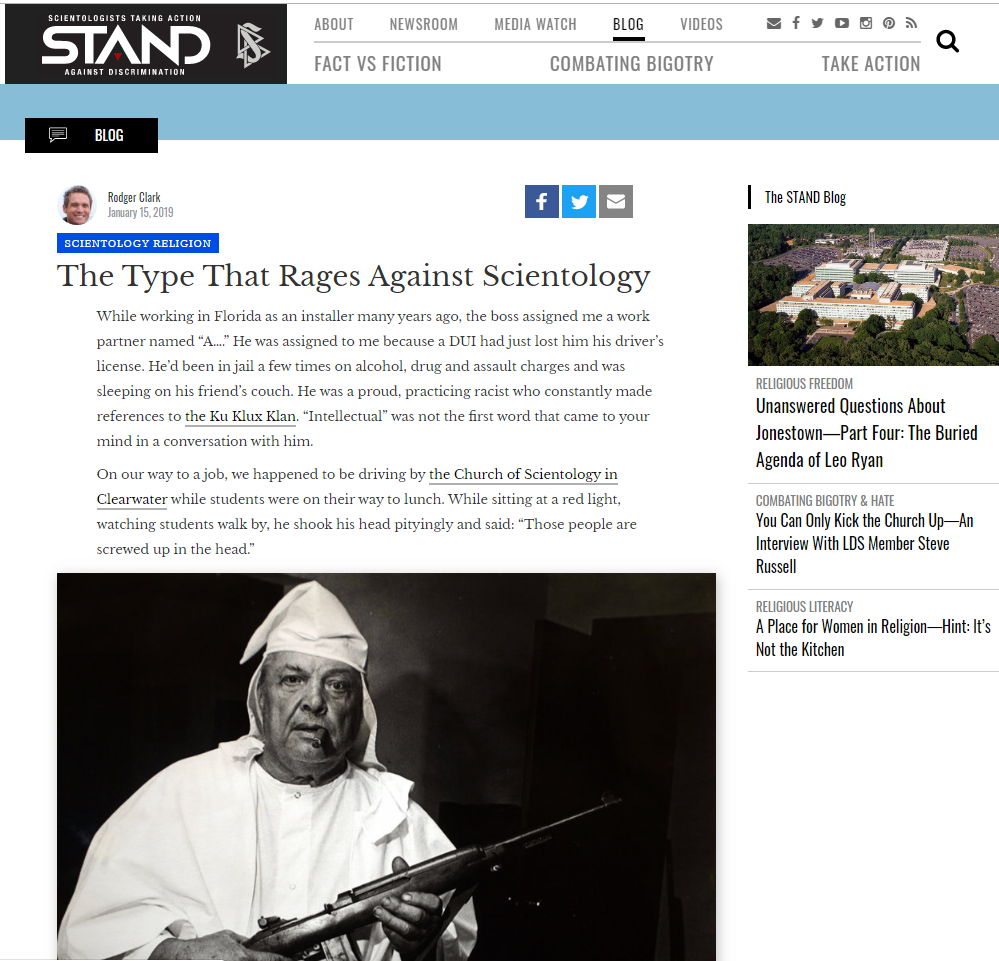 Here is the diatribe in all it’s sordid glory. I have highlighted in red some of the most egregious stuff:

While working in Florida as an installer many years ago, the boss assigned me a work partner named “A….” He was assigned to me because a DUI had just lost him his driver’s license. He’d been in jail a few times on alcohol, drug and assault charges and was sleeping on his friend’s couch. He was a proud, practicing racist who constantly made references to the Ku Klux Klan. “Intellectual” was not the first word that came to your mind in a conversation with him.

On our way to a job, we happened to be driving by the Church of Scientology in Clearwater while students were on their way to lunch. While sitting at a red light, watching students walk by, he shook his head pityingly and said: “Those people are screwed up in the head.”

“This is classic,” I thought. This guy was the poster child for the usual type of person who rages against Scientology. You’ve met this type in your own life. Ignorant, smug, self-satisfied, self-aggrandizing, self-deluded, in a constant search for anything and anyone to hate and belittle, thinking it will somehow make them look good.

He had no idea that inside that church were successful professionals from all over the world: everything from veterinarians to MDs to engineers to bankers to international financiers and internationally known artists, and that many of the staff and parishioners spoke as many as five languages fluently. (If that’s being “screwed up in the head,” count me in!)

Oh… and I must not forget my old neighbor, Mrs. M, who, while on welfare, sat at her computer all day, drinking beer, smoking pot—begging money, prescription opiates, alcohol and cigarettes from anyone and everyone—and who was constantly going to the emergency room due to brittle bones from long-term use of Prozac. There was no end to the amusement I derived from her pronouncements that I was “brainwashed” and “weird.”

Then there are the trolls of “Anonymous.” Probably the most easily manipulated lynch mob and witch-burners in modern history. It’s “members” openly admit to being ineffective as individuals and proudly tout that their sole ability is destruction. Wielding computers instead of ropes and pitch forks, in 2008, they went into a frenzy to “take down Scientology” and “expel [the Church of Scientology] from the internet.”

The results, of course, were not hard to predict, and 10 years later, the Church of Scientology is in better shape than ever. Along with a rapidly growing membership, it has a massive online presence and its own TV station and channel (oops Anonymous… I guess that didn’t work).

What the type of person who rages against Scientology does not—and never will—realize is the collateral damage they create to their own cause. It never occurs to them that there is a relatively large portion of our society who, while looking at that type as they rant and rave, will rightly conclude if that type of person doesn’t like Scientology, then there must be some merit to the subject. They then become curious and check it out for themselves.

You see the type who hate Scientology are always “legends in their own minds.” They are absolutely convinced that they are incapable of thinking, saying and doing anything wrong… ever. Consequently they cannot conceive that anyone would find them to be silly, unpleasant and repellent. People they would never want to be like or associate with. So they will go on ranting, thinking that anyone who doesn’t agree with them must be stupid, then, as Scientology grows, wondering what went wrong. It will never occur to them that they, themselves, are what went wrong, for they are incapable of self-doubt or self-criticism.

So sit back and enjoy the show, folks. The “type” will continue to shoot themselves in the foot and trip on their own tongues. They will continue to promote Scientology by offering themselves up as its opposite. The only thing they have to offer anyone.

I find the KKK to be repulsive. I don’t own a gun. My IQ is not low. Never had a DUI or been in jail. I haven’t been on welfare (and if if I had that would make me a “type”?). And yet you can be sure this article is aimed directly at me and everyone who has ever had even a bad thought about Scientology, let alone posted a comment on a blog or associated with “SP’s.”  Stereotyping is the stick in trade of bigots and haters Rodger.  Maybe that’s not something you noticed – most racists have no clue they are racist. They “know” others can be pigeon-holed based on their skin color.  That’s just “the way things are”…

His other descriptions of people he knows and doesn’t know are equally smug and self-satisfied. They smoke pot and drink beer and are easily manipulated.

Speaking of gullible and easily manipulated, Rodger then proceeds to claim “the Church of Scientology is in better shape than ever. Along with a rapidly growing membership, it has a massive online presence and its own TV station and channel”. Well, if Rodger spent a little more time actually observing scientology he would know this was a string of lies. But the fact is, Rodger is the true definition of bigot. He does not WANT to know anything that would counter his preconceived and erroneous beliefs.

And he sums himself up this way: “It will never occur to them that they, themselves, are what went wrong, for they are incapable of self-doubt or self-criticism… The “type” will continue to shoot themselves in the foot and trip on their own tongues.”

Maybe Hubbard had a point when he said the criminal accuses others of what he or she is doing….

Actual L. Ron Hubbard quote: “After all, we’ll be running things one of these days. And who will we count on? Staff members of tried and proven record of course.” Clearwater voters beware! This is why in September, I will be running for CW city council.