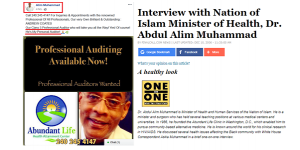 The bizarre relationship between scientology and the Nation of Islam is getting stranger by the day. It would seem that scientology is winning the competition of who's zooming who. NOI members are becoming scientologists, but no scientologists are joining the NOI...   Here's another: This is Clear, Super Power Completion, Auditor & Power Field Staff Member Sister Nayyirah Tivica Muhammad. Here she is at Flag graduation... Will scientology ultimately consume the NOI? It is fascinating to watch this marriage made in hell as it unfolds. Miscavige … END_OF_DOCUMENT_TOKEN_TO_BE_REPLACED