The unholy marriage between scientology and the Nation of Islam continues, and things become stranger as time passes. This is some recent promo sent in by our longtime reader and commenter ISNOI News   Sister Nayyirah Tivica Muhammad is Clear, a Super Power Completion, a Cause Resurgence Rundown Completion, a PTS/SP Course Graduate and an Auditor-in-Training. David Muhammad is her husband. He has done the PTS/SP Course and some Basics courses. He may have done more. The reference to the Fall of America is taken from a book by the same name written by  Elijah Muhammad. I … END_OF_DOCUMENT_TOKEN_TO_BE_REPLACED 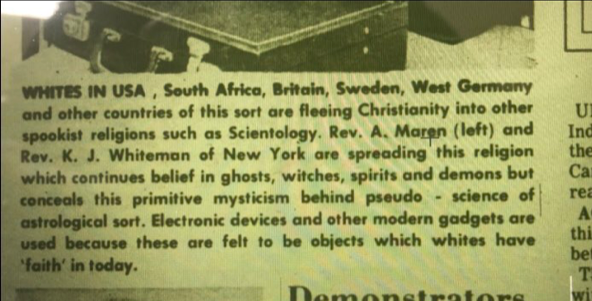 Today, the NOI are in an arranged marriage with scientology. But in the 70's they had other ideas. This was sent in by a former member who found it in a publication. It is less than complimentary to say the least. It really highlights the point that scientology and the NOI are very much opposite in their ideologies. How are they bedfellows today? The only explanation is money. Because it is certainly not their beliefs. From a scientology perspective, the NOI are very aberrated "wogs" who only have value once they have learned scientology "technology" and how to use the … END_OF_DOCUMENT_TOKEN_TO_BE_REPLACED

Once again, scientology demonstrates "do as I say, not as I do" -- following the well-trod path of founder, L. Ron Hubbard. Here again we see the so-called "Stand League" (I prefer to call it by its true acronym, STAAD -- "scientologists taking action against discrimination") railing against anti-Semitism in one of their recent blog posts. This is their attempt to present themselves as champions of religious freedom and speech by taking a sure-to-gain-agreement stance that anti-Semitism is to be deplored. How brave. How noble. Old Martin Landon has really gone out on a limb … END_OF_DOCUMENT_TOKEN_TO_BE_REPLACED 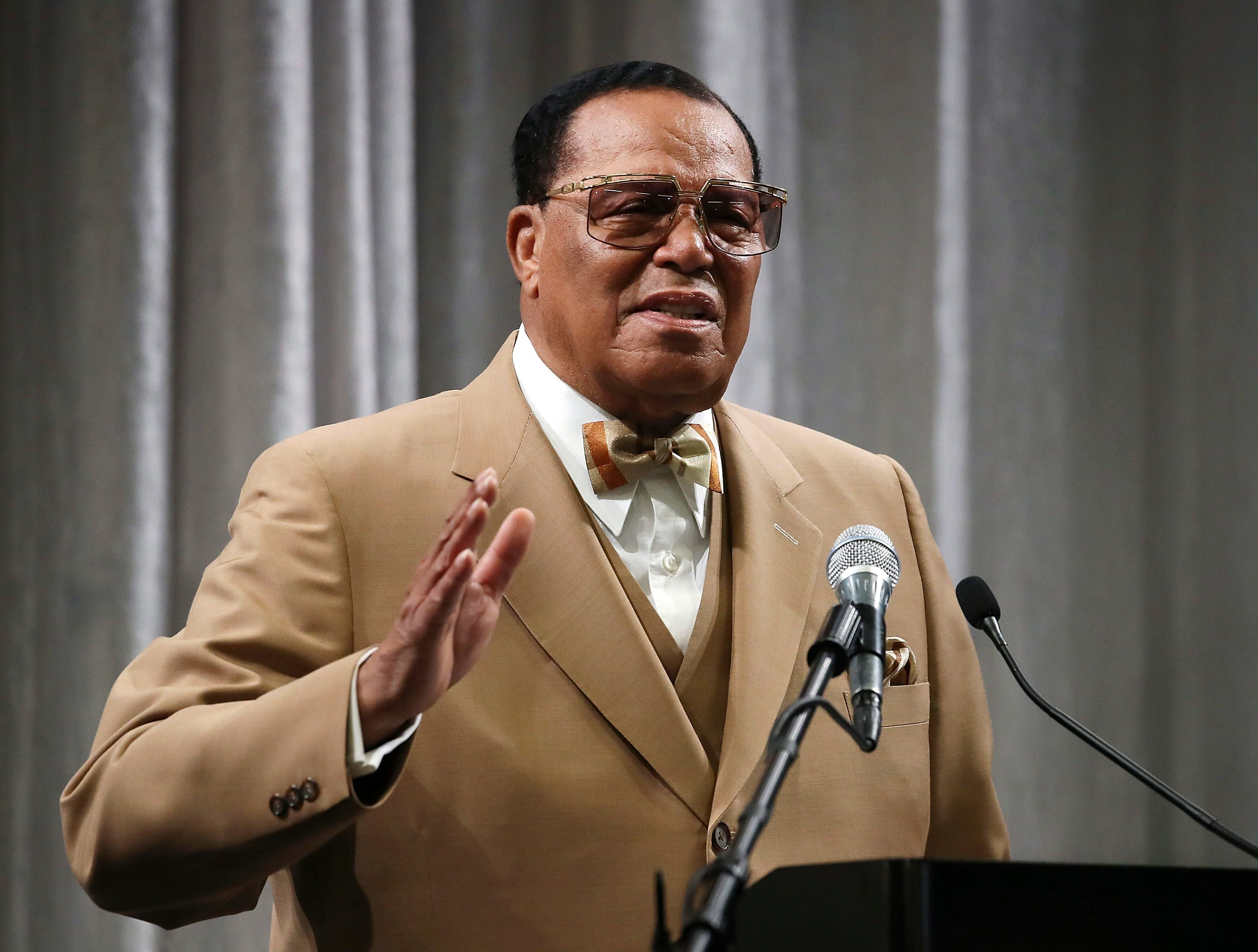 I am not sure who sent this to me, but it is an interesting collection of quotes from the leader of the Nation of Islam: The brazen racism and Antisemitism is breathtaking. And yet, it was just announced that Abdul Malik Sayyid (formerly Tony Muhammad), his Western Regional Director, had attested to the state of Clear... Alfraudie, in his tweet making the announcement, even acknowledges the great "HON MLF" (Honorable Minister Louis Farrakhan). Scientology is SO desperate to try to attract members they are still hitching their wagon to the idea they are making inroads into … END_OF_DOCUMENT_TOKEN_TO_BE_REPLACED 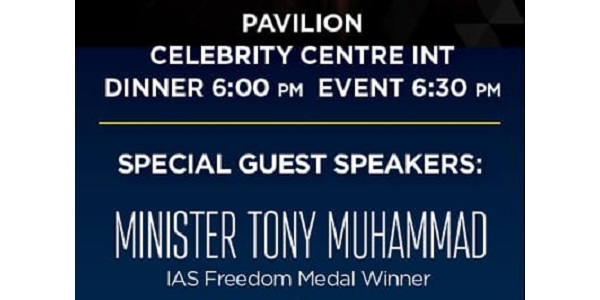 The signals are getting mixed in the ongoing saga of the marriage of inconvenience between scientology and NOI. The breakup seemed almost a fait accompli when Tony Muhammad and Alfrauddie Johnson were uninvited to the annual IAS fundraising extravaganza at St Hill in November. A sure sign of trouble to not have recent medal winners in attendance and participating in the photo ops with Dear Leader David Miscavige. It was understandable given the anti-semitic radioactive glow of the NOI and TonyMo in particular. And the criminal prosecution of Rizza and Hanan Islam for defrauding the … END_OF_DOCUMENT_TOKEN_TO_BE_REPLACED 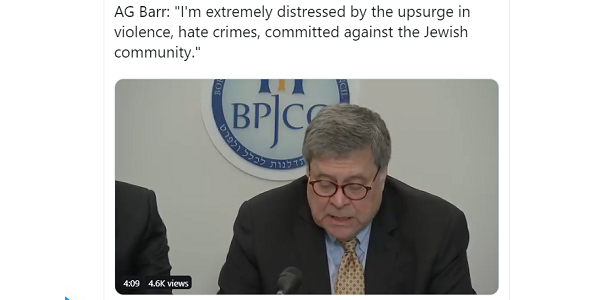 https://twitter.com/i/status/1222202928972402693 This statement by the Attorney General only highlights and confirms what is apparent to everyone in the country. Hate crimes against Jews have reached an unprecedented level. Behind these crimes are vile words that incite acts of violence. One of the major promoters of anti-Semitic hate is Louis Farrakhan, leader of the Nation of Islam. And in turn, one of his main mouthpieces is Tony Muhammad, Western Regional Minister of the NOI. Minister Muhammad is also the poster child for the ugly marriage of convenience consummated between the … END_OF_DOCUMENT_TOKEN_TO_BE_REPLACED

It's Hubbard v. Farrkhan. In the world of fringe beliefs this is King Kong v. Godzilla. Who will come out on top? Louis is making a concerted effort to get the upper hand. For the "KSW" scientologists of the world, this must really rankle. Calypso Louis is taking credit for "giving" the NOI "The Supreme Technology (Dianetic Auditing)"... Not acknowledging or attributing Source is a serious crime in the fundamentalist world of scientology. It just highlights once again how bizarre this marriage is. Under normal circumstances this would be a "Matter of RTC … END_OF_DOCUMENT_TOKEN_TO_BE_REPLACED 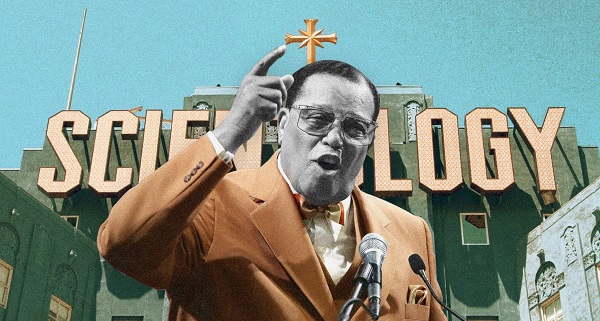 It would appear the NOI ethnic is pervading scientology. Nobody in their right mind would conduct a seminar called "Repair of the White Family." They would of course be labeled as racist. Why wouldn't this simply be "Repairing the Family" (no matter what the skin color?) When the NOI gets involved, apparently norms fly out the window. Because they consider they have to fight for the black man in a white dominated world. They do not allow whites to attend their services. They are militantly pro-"black" and and anti-"white", especially Jews. Remember, this is the organization … END_OF_DOCUMENT_TOKEN_TO_BE_REPLACED

This person has shown up on my Facebook page posting links to "articles" from the STAAD League. Pretty much the usual junk mail that I rarely even see, but I happened to notice this one. In their crazy efforts to convince people that scientology is "multidenominational" and "welcomes everyone" they have launched into outer space. Ask a real muslim if Nation of Islam is true to the teachings of Muhammad and represents their views.... Because they have Islam in their name does not make them real Muslims. I guess Christiana Michael doesn't know about the contents of the R6 bank? Or … END_OF_DOCUMENT_TOKEN_TO_BE_REPLACED

This is the latest piece of self-praise that appears on the phony "STAND League" website. Everyone knows this is simply a front group run by the Office of Special Affairs International and their Twitterer-in-chief Fast Eddie Parkin. They claim they fight for religious freedom and against bigotry and hate -- but in fact the majority of their efforts go to "dead-agenting" Leah Remini, me and the brave victims of scientology abuse who have been on our show. With no new episodes airing, they have little to write about. So while Fast Eddie keeps tweeting about us, they put up a few things on … END_OF_DOCUMENT_TOKEN_TO_BE_REPLACED