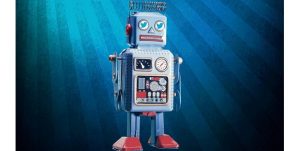 The first Twitter commenter shown in my recent post Scientology Haters Gonna Hate "quentin", turns out to be someone I know. This "quentin" is QC Strom. He was posted for many years at Gold and then sent to SMP. When he was at Gold he was the clapper boy and then worked in SFX (Special Effects -- should really be named VFX for Video Effects) for super asshole, Miscavige pet, Henning Benndorf. QC is the son of OSA Flag hatchet-woman Kathy True and Don Strom, a former INCOMM SO member who left the SO to work in a scientology computer company.     Of … END_OF_DOCUMENT_TOKEN_TO_BE_REPLACED 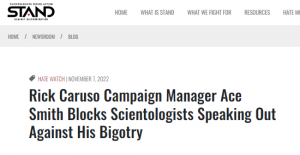 Scientology hypocrisy on display for the world once again. Now they are whining about someone blocking their hate tweets! In this piece they attack Rick Caruso's campaign manager because an ad "outraged tens of thousands of scientologists across the city" (they couldn't gather tens of thousands of scientologists across the entire country at this point). And then he blocked some of them who called him a bigot: Shocked Scientologists took to Twitter demanding to know if the Caruso campaign approved of its manager blocking constituents after they called out his bigotry against … END_OF_DOCUMENT_TOKEN_TO_BE_REPLACED 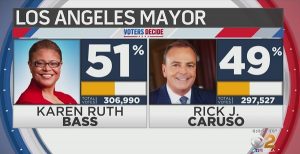 The LA Mayors race really got scientology hot and bothered. When Rick Caruso made it an issue that his opponent, Karen Bass, had attended a scientology ribbon cutting event, it turned scientology into a hot topic. I wrote about this previously: Karen Bass -- L.A. Mayoral Candidate So, the STAND League rallied their troops. To do what? Call and complain about the "bigotry"... The problem they have, is BOTH candidates have taken an anti-scientology stance. With the STAND League letter writing campaign (see: Scientology Massively Unpopular) apparently ineffective, they resorted to … END_OF_DOCUMENT_TOKEN_TO_BE_REPLACED 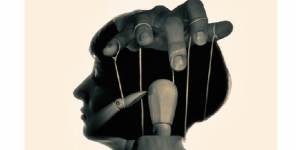 I noticed this some time ago, but had not gotten around to doing anything with it. Another brilliant analysis from the experts at STAND: who of course know absolutely nothing, including what Hubbard had to say... He kicks his piece off with a witty description of how to "wash a brain" before prattling on about how brainwashing is a hoax: How to wash a brain: Carefully remove the brain. Gently immerse it in a bowl of lukewarm soapy water. Scrub the brain gently with a fine bristled brush. Rinse the brain. Wrap the brain in plastic wrap to prevent further … END_OF_DOCUMENT_TOKEN_TO_BE_REPLACED

Typical of STAND League, they have a headline intended to create the impression they are fighting for human rights. But read what they say and it is clear that "free speech" only applies when the speech is something they approve of. And their "responsibility" level for truth and honesty in their "journalism" is dictated entirely by what is good for scientology. Jim Kalergis is very long-term koolaid drinker. One of the most well-known scientology FSMs and "Field Auditors" in Los Angeles. He proclaims, with the assume moral superiority so common to fundamentalist scientologists: I don’t … END_OF_DOCUMENT_TOKEN_TO_BE_REPLACED

This is a couple of weeks old now, but the hypocrisy remains current and fresh... Scientology seeking to gain credibility for itself by pretending to align with the ADL. Of course, scientology CLAIMS they "stand with the ADL" and are champions who fight at every turn against anti-Semitism. But what is the real story? Scientology fully supports the Nation of Islam, and presented its highest recognition (the "IAS Freedom Medal") to Tony Muhammad (he now goes by Abdul Malik Sayyid Muhammad). This is very well documented in numerous previous articles on this blog (and elsewhere) … END_OF_DOCUMENT_TOKEN_TO_BE_REPLACED 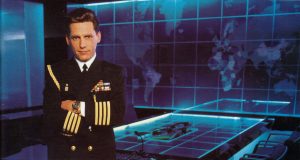 I recently posted about the sycophants gushing over Captain Miscavige. Here is another one. In celebration of his birthday on Saturday, the brown-nosers at the Stand League sent out this tweet (not a word these days from Fast Eddie Parkin -- he was so righteously right, but I guess not good enough in the end and now scrubbing dumpsters somewhere): Obviously, as the celebrations for Ron's Birthday are on the decline in terms of importance and attendance, Captain Dave is taking Source's place. The official propaganda organ of scientology is tweeting out about how it's a "privilege" to … END_OF_DOCUMENT_TOKEN_TO_BE_REPLACED 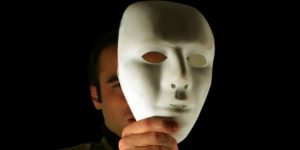 More scientology hypocrisy. They often shout they are champions of "freedom of religion" and of course "protect everyone's right to practice the religion of their choice." Unless they believe that choice is in some way harmful to scientology. This article on the STAND League website claims that they have created a "case library" with all the important First Amendment cases included. The article was published on 26 January 2022. Of course, this article appeared just a week after the most recent First Amendment case ruling, specifically addressing the freedom of people NOT to be … END_OF_DOCUMENT_TOKEN_TO_BE_REPLACED

This is the bleat they repeat over and over. "We stand for everyone's human rights" and "we protect the rights of everyone to practice the religion of their choice" -- what they don't say out loud is the rest of the sentence: "UNTIL it is inconvenient for us." One need look no further than the recent California Appeals Court decision in the Masterson case. Tony Ortega covered the decision at the Underground Bunker It held in part (emphasis mine): Individuals have a First Amendment right to leave a religion. We hold that once petitioners had terminated their affiliation with … END_OF_DOCUMENT_TOKEN_TO_BE_REPLACED

The fools at STAND either: a) Believe everyone is so stupid they don't see right through them, or b) Are only interested in communicating to their KoolAid drinking bubble-dwellers who accept anything and everything they say at face value as if it is unalterable truth, even if it contradicts something they said in the previous sentence.   The drivel they put out is so easily exposed as lies and propaganda it's hard to believe they even bother. The image above is a screen shot from their website. Trying to sound like freedom of religion warriors for truth and media ethics … END_OF_DOCUMENT_TOKEN_TO_BE_REPLACED