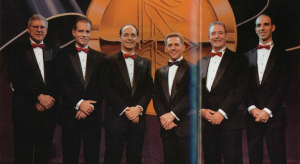 Why is there no President of Church of Scientology International? Heber Jentzsch, after being "disappeared" years ago is now represented as being "retired" -- but there is no new President. In fact, there isn't even a spokesman, let alone a President (who is supposed to be the lead spokesperson). Heber, once a very public figure, is no longer seen outside of the razor wire topped fence of Golden Era Productions. I last saw him in late 2006 in the Hole. Sleeping on the floor and eating slop, guarded 24 hours a day. Who is the Executive Director International? Guillaume Lesevre held … END_OF_DOCUMENT_TOKEN_TO_BE_REPLACED

@jkbjournalist's work prevented the abuse and trafficking of COUNTLESS girls and women.

Farrakhan is a vile anti-LGBTQ anti-Semitic misogynist. Why is a Fox channel airing his propaganda? https://t.co/dmX7A6LSd2

For anyone dealing with scientologists, esp police, lawyers, judges, the media. Scientologists WILL uniformly lie to protect scientology. "Wog" (non-scientology) justice is corrupt, the media are "Chaos Merchants." Lying to them is helping mankind. https://t.co/aVgJaEXsim