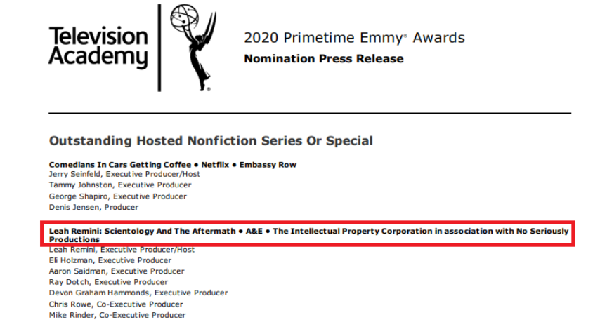 The Emmy nominations were announced this morning. This came as a pleasant, but total surprise. Leah Remini: Scientology and the Aftermath has been nominated each year it aired -- 4 times in all as the 3 seasons spanned 4 years of eligibility. That is a pretty remarkable record, and we thank and congratulate IPC, A&E and our crew for their dedication, courage and professionalism. And to the Television Academy for their support. But most of all we recognize the brave contributors who bared their souls and stories in the face of scientology's reputation for conducting Fair Game … END_OF_DOCUMENT_TOKEN_TO_BE_REPLACED

This must be driving #scientology crazy. Media picking up @LeahRemini quotes and promoting not only #ScientologyTheAftermath but also our new #ScientologyFairGame podcast. They deserve every piece of bad press they earn for themselves. https://t.co/FeBkW4x356 via @nypost

Hear, hear Leah! And I must add, I loved our guest, @beharjournalist -- funny, brave and informative.

Hey all, @MikeRinder and I want to thank you for your support of the new podcast! Truly, thank you for listening and for all of your positive feedback. New episode of Scientology: Fair Game available now https://t.co/DqO0aDyhDG and every Tuesday.

Thoroughly enjoyed our chat Rich. Your wit and perspective brought so much to episode. Thanks again.

If you are looking for the documents @LeahRemini and I mention in the podcast, you can find them here: https://t.co/9lFv8UIOIk
Just click on "view documents" under the 11 August episode.

In our new #ScientologyFairGame podcast Ep 3: Scientology's War on The Media, @LeahRemini and I talk with investigative journalist @beharjournalist about his Time mag cover story, and Scientology’s retaliation. Thoroughly enjoyed his wit and perspective. https://t.co/dfPl61V4tN