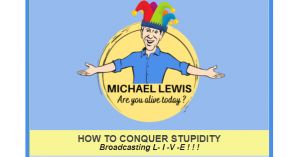 This is a remarkable promotional item that one of our readers just sent in. Michael Lewis demonstrates his lack of judgment and intelligence right in his own promotional piece. Aren't those the two elements of stupidity? First, the image of himself he is using -- the court jester -- represents the polar opposite of "conquering stupidity." Second, he claims he got a "bombastic" response to his announcement -- like that's a good thing. Apparently he doesn't know the word means "high-sounding but with little meaning; inflated." Then he announces that some people offered to write … END_OF_DOCUMENT_TOKEN_TO_BE_REPLACED

Corporations shouldn't be able to silence survivors. Today I stood with my colleagues and @GretchenCarlson to introduce the Speak Out Act, our bill to ban pre-dispute non-disclosure agreements in cases of sexual harassment & abuse. Survivors ⁠— your stories deserve to be heard.