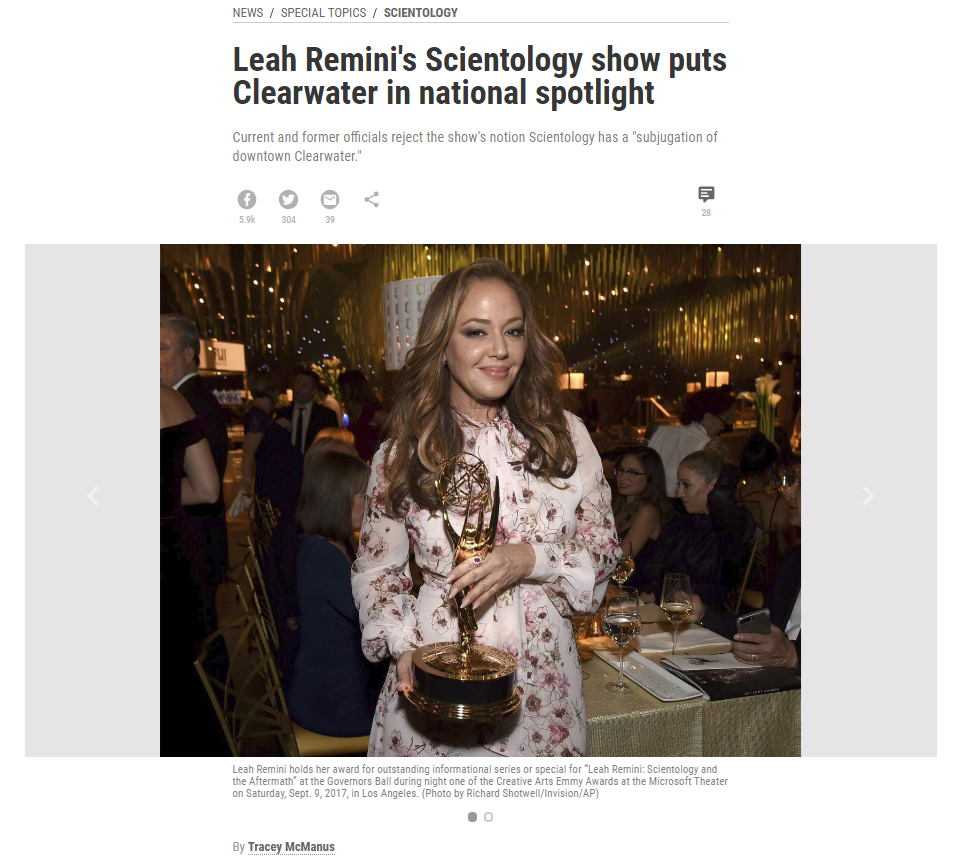 The article above appeared in the Tampa Bay Times after the “airing” of The Aftermath this week, an episode focused on scientology’s take-over of Clearwater.

I said “airing” because for subscribers to the local cable outlet, Spectrum, the show was unwatchable. The sound was scrambled and some images pixillated. The problems magically fixed themselves 2 minutes after the show aired. And the problem ONLY manifested itself on The Aftermath episode, no other channels. Subsequently, all the “On Demand” Aftermath episodes also disappeared from Spectrum. Of course, there is nothing suspicious about this at all. Especially when you know the lengths scientology has gone to in the past — like sending out teams of minions to buy every copy of the Tampa Bay Times when the Truth Rundown was published. And maybe it’s a mere coincidence that downtown Clearwater is home to one of the largest scientologist owned and operated tech companies that specializes in cyber-security.

The subhead is a doozie. Current and former officials “reject the notion” that scientology has almost attained its goal of complete subjugation of downtown Clearwater…

One has to wonder which downtown Clearwater they are talking about?

And the Mayor of Clearwater, of all places on earth, is quoted as saying he has never seen The Aftermath. He must be literally the ONLY person in Clearwater government who has not. A lot of city employees have reached out to me and always say that “everyone in the city is riveted to the show.” Apparently everyone except the Mayor who doesn’t want to know anything about scientology except what he hears from scientology? Doesn’t he owe it to his constituents to be informed about the biggest landowners in his city?

The Mayor seems to be one of the prime subjects of the subjugation.

For Cretekos, being mayor of Clearwater must feel a bit like owning a beautiful home, only to have to share the space with a boorish brother-in-law who lies around all day and drinks your booze.

“It’s a little frustrating when you have a Church of Scientology,” Cretekos nodded while he picked at a Panera Bread bagel, before quickly adding that his issues with the sect are not with the local members. “But for some reason, its leadership thinks it is above the community.”

Over the years, Scientology has ignored local zoning codes, ran up a $435,000 fine for construction delays on its recently opened soup can E-meter Flag Building, and essentially regarded City Hall as a quaint nuisance.

And of course, Scientology is infamous for hounding and stalking former members of the cathedral of creepiness and its critics.

All mayors have a responsibility to promote the many charms of their cities. And Clearwater has numerous virtues to exploit.

But Cretekos’ job to attract tourism and investment is made all the more difficult by the overarching shadow of a mysterious and quasireligious gaggle of Stepford Scientologists roaming the city. Really now, who wants to set up shop next door to what amounts to little more than a group of theological grifters?

And that largely explains the city’s fervor in expanding the Clearwater Marine Aquarium and renovating the Capitol Theatre. Cretekos makes no bones that these efforts are an attempt to wrest the city’s image as a haven for deer-in-the-headlights Scientology sycophants and create one of a more welcoming place for nonbelievers. “We still have a lot of potential.”

Still, Cretekos is a realist. It’s entirely possible that Scientology’s deep pockets have already taken over downtown Clearwater. And it might be time for the city to rethink where it wants its core presence to be. Cretekos has begun to muse, mull and meditate that the day might come when Clearwater’s city center settles elsewhere.

The new article also quotes one of the Clearwater City Council members who takes the head-in-the-sand philosophy of leadership to new lows:

“To make it sound like the local elected officials are just acquiescing to Scientology, nothing could be further from the truth,” said Hamilton, who is in his fourth term on the council since an appointment in 2001. “We have to play the hand we’re dealt with. The only people that can deal me a better hand than what we have is the federal government. That’s not something the city of Clearwater has the resources to do. The federal government gave them their tax exempt status. The federal government is the only one that can take it away. We can’t do anything to change that.”

“We have to play the hand we’re dealt”? Seriously? This is the antithesis of what EVERY politician on earth says when they are running for election “Vote for me, I will change things for the better. I will make a difference.” Apparently not Hoyt Hamilton. “Elect me and I won’t change a thing”… He can do nothing? Imagine if Martin Luther King had his attitude?

If anyone SHOULD be demanding the Federal Government do something about the tax exempt status of scientology it is the City of Clearwater. They are losing MASSIVE tax revenues from the scientology-owned property. Scientology loves to shout from the rooftops that they are “the largest single taxpayer in the city” and that is true. But what does THAT tell you about how much of the city they control? Scientology ONLY pays taxes on properties that are HOTELS. They pay nothing for all the rest. Perhaps 25% of their property is taxable. And that 25% STILL constitutes the biggest landowner in Clearwater.

Thus if scientology pays $1 million in taxes now, if they didn’t own the properties the city would gain an extra $3 million in tax revenues. They may be the biggest taxpayer in Clearwater, but they are also the biggest drain on tax revenue. Clearwater is forfeiting $4 million to get $1 million and scientology is patting itself on the back and the city throws up its hands and says “what do you expect us to do?”

As Clearwater attorney Denis DeVlaming so simply put it on The Aftermath — if the Super Power building starts to burn down, who is going to put out the fire? The Clearwater Fire Dept — that the citizens are paying for.”

So, Mr. Cretekos and Mr. Hamilton are you so paralyzed with fear that you are unable to do ANYTHING about the tax exempt status of scientology?

You have no influence on the Police Department? You cannot request a Grand Jury (you know if scientology is convicted of a crime it is grounds for the IRS to revoke exemption)? You don’t have any sway with any Congressman or Senator? Don’t know a single person in the Justice Department? You can do nothing but hope others will do it for you? Hardly profiles in courage…

These are the same people who declined to appear on the show to discuss the issues or present their views.

They also try to divert attention with false equivalencies — “there’s a lot more to Clearwater” and “tourists coming through just go to the beach and don’t even notice scientology.” These statements are likely true — the former more so than the latter. But they are a diversion. There are 3 flourishing downtown areas in Pinellas County — Dunedin, Safety Harbor and St Petersburg. None of them are next to the beach. None of them has a main connector road running through the middle of them (“the decline is due to the new bridge taking all the traffic away from Cleveland St.”). But most importantly, none of them has an oppressive cult presence dominating the landscape and sucking the life out of the tax base.

Mr. Mayor and City Council: Who are you waiting for to come and save your city for you while you try to convince yourselves and everyone else it doesn’t need saving?

Finally, of course, scientology did not respond to a request for comment but “an online church statement said Remini is spreading provable lies which generate hate, bigotry and violence.” What else is new? Scientology “attacks the attacker.”  Clearwater’s elected officials hope they won’t be on the receiving end of scientology’s wrath so do and say nothing that might offend the cult elephant in the room. No sign of subjugation here.