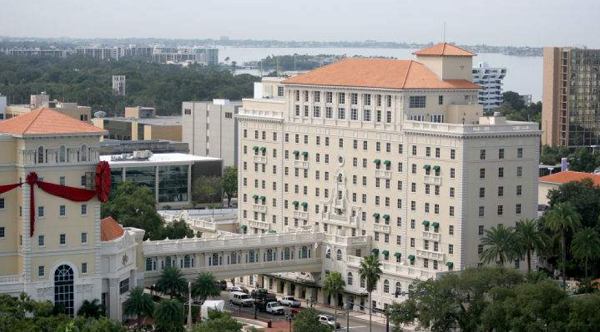 The news has sunk in, Mark Bunker is now a Clearwater City Commissioner-elect. As Tracey McManus put it, this is a historic day for Clearwater. There is another piece in the Tampa Bay Times (top of article screencapped above) this morning. It makes some interesting points - first of which is noting Bunker's "desire for the city to urge the IRS to revoke Scientology's tax exempt status..." Some have poo-poo'd this idea "The City of Clearwater doesn't grant tax exempt status, the IRS does" -- as if Mark Bunker is unaware of the difference between a city government and the … END_OF_DOCUMENT_TOKEN_TO_BE_REPLACED 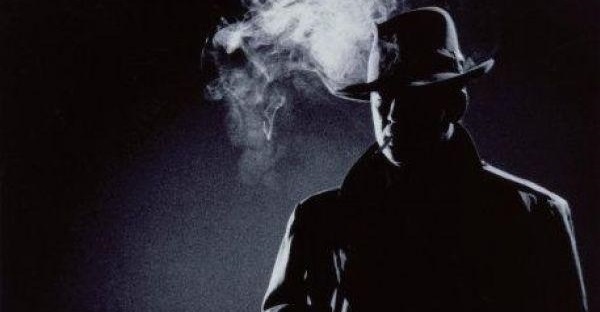 See my announcement on Friday -- I am revisiting earlier posts during my vacation. Each day there will be a different one. Marty has been doing a good job of exposing the unalterable policies of the church concerning dealing with perceived enemies. One aspect not much discussed is who are the "outside professionals" hired to do the dirty work. And while there is a lot that is done by Sea Org OSA staff, Class V (local DSAs like Mark Warburg and John Carmichael) and public Scientologists (John Allender, Ed Bryan and Co) there is work that requires specific skills, including licenses to … END_OF_DOCUMENT_TOKEN_TO_BE_REPLACED

A recent article in FlaPol (FloridaPolitics.com) reports on recommendations from scientologists "Citizens for Social Reform" (Brett Miller, Joanie and Steve Sigal) These are the surrogates who deliver the political direction of the church without being a formalized statement from the institution. Why do they do it this way? Because if the church itself published them it would run afoul of 501(c)3 prohibitions against political endorsements (though the Evangelicals don't seem to be too concerned about that). But make no mistake, the "Citizens for Social Reform" are just another scientology … END_OF_DOCUMENT_TOKEN_TO_BE_REPLACED

More evidence, as if it were needed, that scientology is failing. Flag is empty. If there was massive international expansion, the number of people moving up the bridge would be increasing. Flag is the pinnacle of the empire and its state is a clear reflection on all of scientology. This is the Oak Cove hotel at 7:30 pm the other night. As you can see, the place is virtually deserted.   This is the nearby retirement home that is the companion building to this one (they used to be part of the same community, but scientology bought the block closest to the Ft … END_OF_DOCUMENT_TOKEN_TO_BE_REPLACED

Scientology uses any opportunity to try to get people to step inside their buildings. Each of these supposedly non-church activities is part and parcel of the same big ball of wax. And you can bet that if anyone is silly enough to attend any of these things and give their name, phone number or email they will be receiving SCIENTOLOGY promotional materials for the next 100 years. And here is another "Valentine's Day message" put up on my daughter's web page. The twisted logic of this one defies description. My message to you on this Valentine's Day is "hate your father and do everything you … END_OF_DOCUMENT_TOKEN_TO_BE_REPLACED 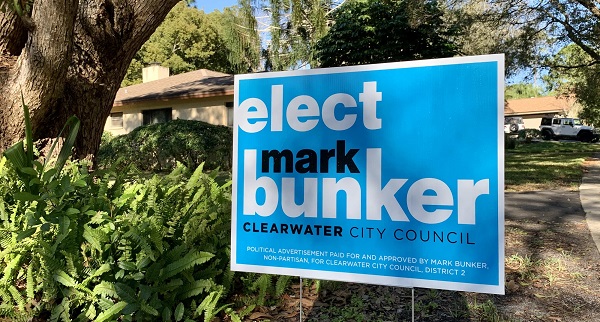 Tonight is the official Candidates Forum for the City Commission hopefuls conducted by the city. The event begins at 7 p.m. in the City Council chambers in the Main Library at 100 N Osceola Ave. The city will broadcast the forum live on the streaming video page at http://bit.ly/ClearwaterCityCouncilMeetings and the city’s Facebook page at https://www.facebook.com/cityofclearwater/. It will also be shown on C-View TV, Clearwater’s cable access channel, on Spectrum (channel 638), Wow! (channel 15) and Frontier (channel 30). The election is a little more than one month away -- on March 17. … END_OF_DOCUMENT_TOKEN_TO_BE_REPLACED 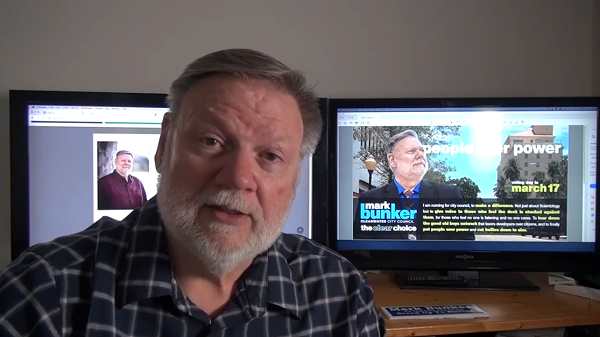 Please watch this short, self-explanatory video. It is important for Clearwater citizens to know that one candidate for the City Council is on the ballot and he is not afraid of scientology. Mark Bunker will represent the interests of the citizens of Clearwater. He is a smart, kind man with a backbone of steel. He will not be intimidated or cowed by bullies of any sort. Please take a moment to do what you can to support him. You don't need to be a citizen of Clearwater. Scientology wants to make Clearwater the first scientology city. Note, they say "First". If they are not stopped in … END_OF_DOCUMENT_TOKEN_TO_BE_REPLACED

Clearly scientology is worried that Mark Bunker is proving to be a viable candidate for the Clearwater City Council. They are now resorting to one of their tried and true tactics against those who worry them the most (see below in this blogpost for earlier examples of the same playbook). Following is a series of short videos of a recent candidates forum. Scientology sent along a gaggle of hecklers to disrupt Mark's statements -- pursuant to the policies of L. Ron Hubbard. Unfortunately, there is no video showing their faces -- perhaps next time when both Aaron Smith-Levin and I … END_OF_DOCUMENT_TOKEN_TO_BE_REPLACED 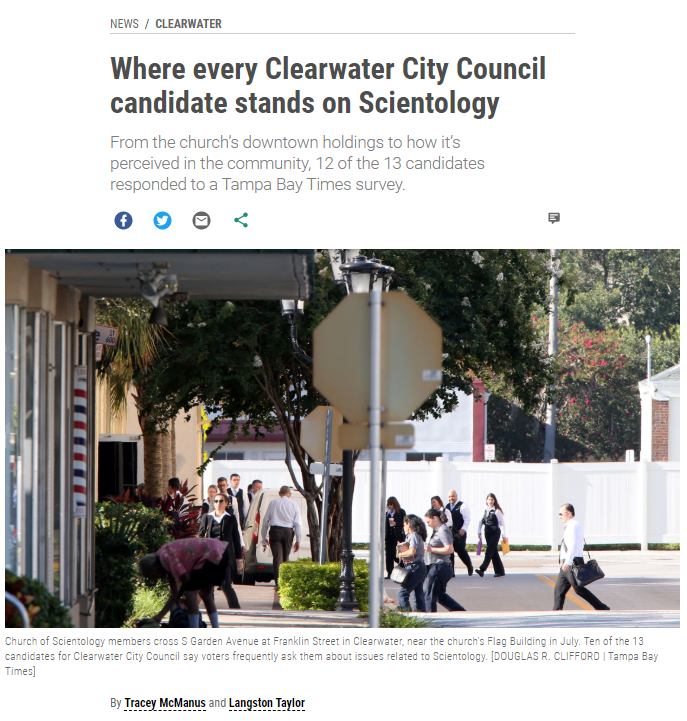 Tracey McManus published another of her uniformly excellent articles recently:  Where every Clearwater City Council Candidate stands on Scientology I have excerpted most of the answers to her survey and offer my biased views on them. I believe there are just two reasons why scientology is actually being spoken about in this election.  It has been a taboo subject for local politicians for decades. They have steered clear of this topic like it was the plague...  Now for the first time in recent memory, it is something  to be debated. The two factors are Tracey's bombshell article … END_OF_DOCUMENT_TOKEN_TO_BE_REPLACED 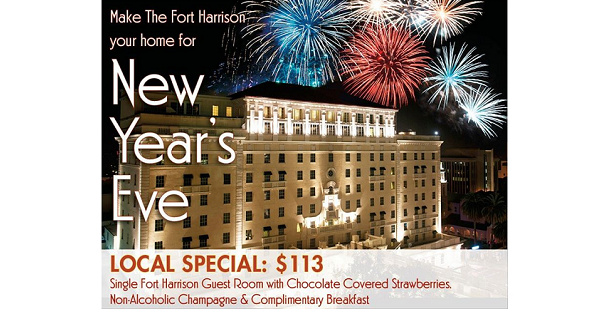 They claim it is a 4 star hotel. This is the peak season in Florida. Yet while every other hotel is charging the highest prices of the year, they are trying to attract people with special discounts -- $113 for a 4 star hotel in Florida in January? Absurd. And breakfast thrown in and chocolate covered strawberries. At this time of year you would be lucky to get into a 2 star hotel for that price. The place is empty and they are doing anything they can to get some rooms occupied. If Flag was "booming" the Ft Harrison would be full and they would not have room for locals to … END_OF_DOCUMENT_TOKEN_TO_BE_REPLACED