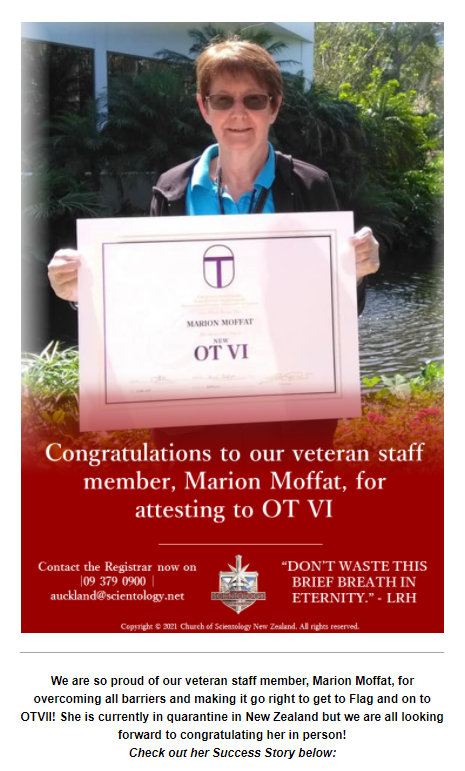 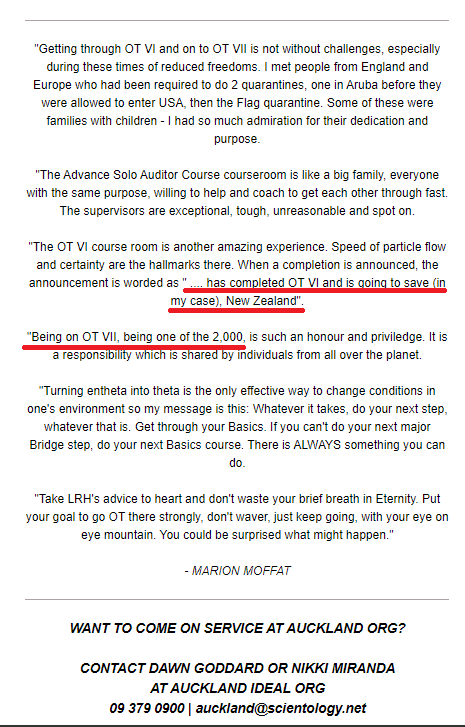 This is another in the series of scientology promotional pieces that reveal far more than they intend.

Apparently, the senior OT scientologists at Flag believe this lady is going to “save New Zealand.” This is the sort of magical thinking these people pride themselves in. They aren’t merely deluded, they announce it to the world as if this is perfectly normal. And inside the bubble, IT IS. That is what is so remarkable.

Sorry Marion Moffat, you have been on staff for decades in Auckland and have accomplished absolutely no impact on anything. Now, because you are telepathically “auditing” body thetans — which is delusion if not utter madness — you are going to “save” the nation. From psychiatry? The media? The Fifth Invaders?

And what do you mean — “being one of the 2,000”? Since the early 90’s the target has always been 10,000. Of course, decades roll by and this meager target is never approached. So now they’ve cut it back to something more manageable? 2,000 on Solo NOTs?

Just one point of note. The question is asked often — how many scientologists are there. And there are various ways of estimating the actual number (scientology these days just says “millions” they got up to 10 million in their claims at one point, but they don’t seem to be saying that any more).

But if it is a great achievement to have 2,000 people on Solo NOTs, that is a pretty good measuring stick of how many actual scientologists there are. Everyone is expected to get onto Solo NOTs. 1 in 10 might make it — ie have enough money to get there (even though scientology supposedly has ALL the tech to make money and make you succeed and “make your postulates stick”) — so that puts the total number of scientologists once again around 20,000. This is the number most formulas seem to arrive at.

I think even that number is diminishing every year.