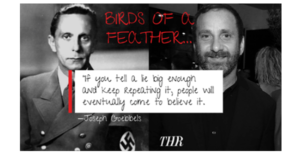 Apparently, Seth Abramovitch of the Hollywood Reporter has caused some serious butthurt in the scientology world. A couple of recent articles seem to have put him on the Enemies List and scientology has responded in their typically understated fashion. On one of scientology's many Facebook smear pages, they repeatedly posted this: I guess the irony of this being posted on their own Facebook hate page "Leah Remini #AfterCash" never occurred to them? They keep repeating the big lie that Aftermath is about money... It must be obvious to even THEM by now that this docuseries does not … END_OF_DOCUMENT_TOKEN_TO_BE_REPLACED