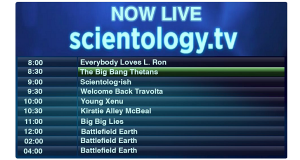 There have been some marvelous takes on scientology tv, and I have included just a few of my favorites here. But there is a HUGE missing piece. If this is the most important and monumental thing in the history of scientology and Miscavige himself "emerged from witness protection" to introduce it, where are the other big names? THE thing that most people know about scientology, above and beyond anything else, is that it has celebrity members. And a bunch of them are even TELEVISION stars. How can scientology TV not have ANY of their celebrities participating? Not even a cameo ad? … END_OF_DOCUMENT_TOKEN_TO_BE_REPLACED