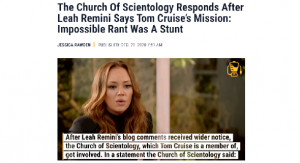 How odd is this. Scientology is speaking as the PR representative of Tom Cruise. While he and his PR people remain silent. The man who laughs in the face of suppression and can confront and shatter any SP is apparently unable to confront some bad media. It would seem David Miscavige was upset that "nobody was coming to the defense of Tom" and so ordered his minions to put out a statement. To me, this is further indication that the whole thing was a publicity stunt that blew up in their faces. Or at the very least, Miscavige had praised Cruise for his "tough guy" image and told him he was … END_OF_DOCUMENT_TOKEN_TO_BE_REPLACED