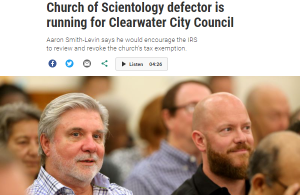 The latest Tracey McManus article  on scientology ran yesterday, announcing that Aaron Smith-Levin is running to join Mark Bunker on the Clearwater City Council. Unfortunately, the editor chose a photo that featured me more prominently than Aaron and some thought I was running (I do not live in Clearwater so am not eligible to serve on the City Council). This is a significant event in Clearwater. Mark Bunker was elected to the City Council earlier. There is a new regime in Clearwater -- a new City Manager (Jon Jennings) and City Attorney (David Margolis) are coming to town, hopefully they … END_OF_DOCUMENT_TOKEN_TO_BE_REPLACED