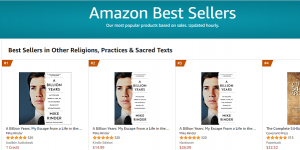 Scientology has come up with a new tactic to add to their smear videos, "Open Letter", legal threat letters and Google Ads. They are really scraping the barrel now. It seems that over the weekend they ordered people to buy Ryan Prescott's "takedown" of A Billion Years and then write glowing reviews about it! I've not seen this done before. But they have gotten enough people to fork over $3.50 that this is now listed as a "Best Seller" with 147 glowing ratings... You know these are false, because if you have ever read any of the previous drivel churned out by Ryan Prescott, you would know … END_OF_DOCUMENT_TOKEN_TO_BE_REPLACED