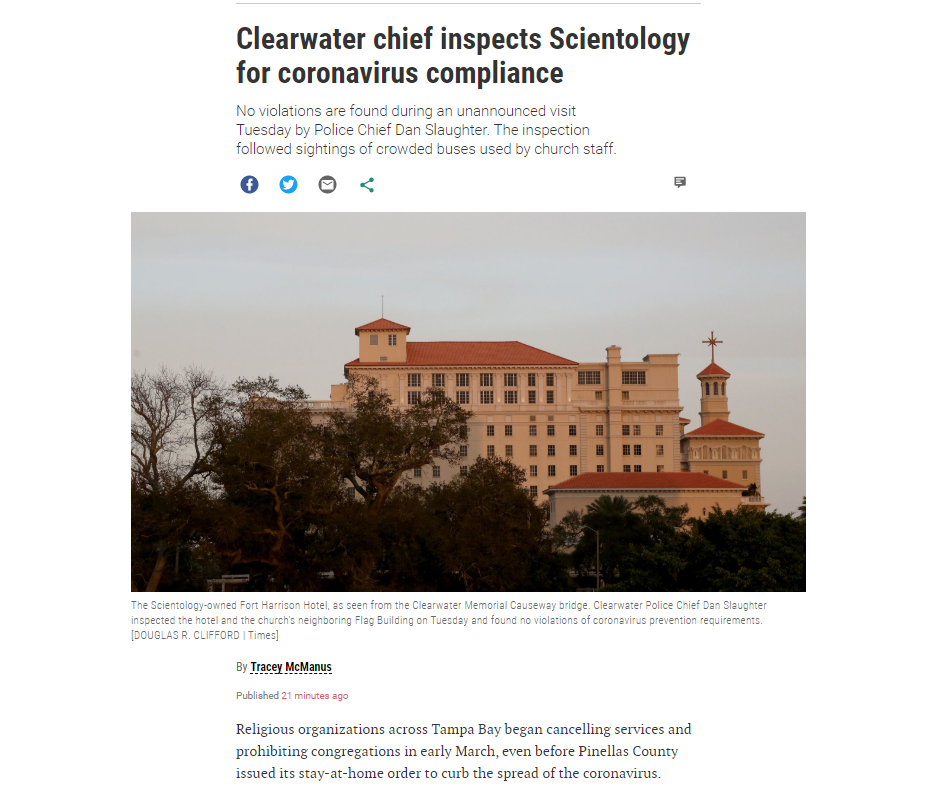 As always, Tracey McManus has the story.

I spoke to Tracey about this earlier today and she quoted me in the article. But I had more thoughts on it that she was unable to include. I also have a copy of Chief Slaughter’s publicly available report.

First, this comes as a relief to me. My son is in this facility, so anything being done to mitigate the threat of this pandemic is very welcome.

Second, I applaud Chief Slaughter for taking the initiative to do something. I do not recall the last time any city official walked in to the Ft Harrison to check out what is going on.

Third, clearly the pressure from the Tampa Bay Times and citizens calling the PD and Sheriff’s Office was the impetus for action. And Mark Bunker arriving on the City Council and expressing his concern to the City Manager and police cannot be underestimated.

Fourth, I think it is important for the well being of those inside Flag that they are being forced to address the issues of this pandemic. Tracey focused on this aspect of my comments in her article. The Chief of Police walking through their buildings is a VERY big deal and if nothing else raised the awareness of the seriousness of the matter.

Fifth, the city and CWPD especially need a better understanding of how things work inside scientology to be able to do their jobs effectively. I have conducted tours like this for officials and media on many occasions. Even if it was a “surprise” a drill goes into place instantly. People are on their walkie-talkies running (literally) ahead of the tour route (“We are heading to the pool then through the walkway etc”) to ensure all is in order. Nobody sitting closer than 6 feet. Tables separated. No plates of food lying around. Signs all in order. Everything scientology organization can move into a “clean-ship drill” almost instantly. They have cameras on the outside of the buildings too — if Chief Slaughter was sitting outside in a cruiser or even on foot to observe the buses, he would have been spotted and any buses that DID have a lot of people on them would have been radio’d to turn around and head back to where they came from. The sophistication of the operations is not easily understood. But that does not take away from the fact that the impact of this inspection was great.

Finally, I have been critical of law enforcement when I feel they have been negligent or in error. Similarly, I want to recognize and thank them for doing their job. Well done Chief Slaughter. I hope this is the begining of a new era in Clearwater. You can be even more effective in protecting the citizens of Clearwater (INCLUDING the scientologists) if you understand better how they operate. You have a great resource now sitting on the City Council to help you with this.

Here is the Chief’s report sent to the City Manager:

I spoke with Councilman Bunker today regarding concerns about the Church of Scientology parishioners and requesting a welfare check be done. Additionally, our Communications Center received some calls about Scientology compliance with CDC guidance, executive orders, and resolutions. PIO Shaw advised there was some similar concerns expressed on Twitter. I spoke with Sheriff Gualtieri, who indicated he had field some inquiries about it as well. There was a youtube video posted that referenced March 21, which showed buses at or near capacity; but that date was before the “Safer at Home” order.

Based on the reported concerns, I did the following:

Based on the observations made, I don’t see any compliance issues. They have prevalent signage and disinfectant available. Neither location was dense with people. Ben Shaw advised that with air travel restrictions, occupancy is currently lower than normal.

Feel free to contact me if you have any questions.