If you think the Petition to President Obama has nothing to do with you, your friends, your family, and even your neighbors, think again.  What follows is but one of many stories about how the taxpayer subsidized, mafia-like tactics of David Miscavige pose a danger to society at large.  Ratchet up your confront of evil a couple notches.  David Miscavige with a billion tax free dollars is capable of – and is trying his hardest to achieve – a tremendous amount of chaos and hurt  even to those who have never heard of Scientology. If you don’t want advances in the sciences and particularly health sciences to be squashed like the Dark Ages by a well-heeled sociopath then go to  http://wh.gov/4Os and sign the petition now – then get five other people to do the same. 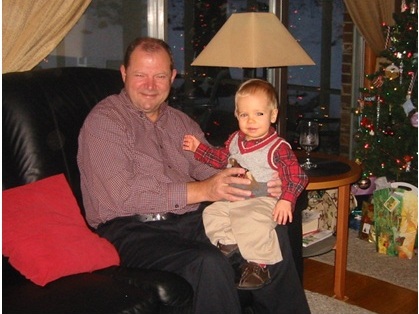 Robert Almblad with one of his grandchildren

Why doesn’t David Miscavige, the self-appointed leader of the Church of Scientology, want the world to have clean, safe ice?

And just what is “safe ice” and why is it important?

It’s a dirty not-so-little secret in the world of food service, hotels and hospitals that commercial ice machines make “dirty” ice. Numerous studies have confirmed this.  Seven  years ago a high school student in Tampa, FL made national headlines by taking samples from fast food outlet ice machines and toilet bowls.  Testing showed the toilet bowl water was cleaner 70% of the time. Hospital administrators are aware that ice machines are a source of hospital acquired illnesses (HAI’s) – more than 100,000 people die in US hospitals each year due to HAI’s, many more contract non-fatal illnesses they did not have when they were admitted.  But until now there was no technology to solve the problem.

Robert solved the problem of “dirty ice,” with an innovative solution that could potentially save lives or prevent the spread of illness.

This was big news and welcome news to those aware of the problem.

Not so to David Miscavige.  He perceives safe ice as a threat to his “empire” and Robert Almblad among the top 3 on his “enemies list.”

Why? Because Robert Almblad dared to associate with Scientology whistleblowers Mike Rinder and Marty Rathbun.  And even worse, Almblad retained Mike Rinder to work for him.

In the twisted mind of Miscavige, he is determined to force Almblad to disassociate himself from Mike Rinder so Mike is put into a “more amenable frame of mind” without a job and will therefore cry “uncle” and stop exposing the abuses of Miscavige.

But when Almblad refused to bend to the pressure, Miscavige implemented a plan to destroy him utterly – and along with it, his safe ice invention.

Miscavige’s pattern is a familiar one. Numerous media reports document his ruthless and unethical acts in furtherance of his desire to maintain leadership of his cult.

And so, Almblad became the subject of a widespread, expensive and incredible campaign of harassment.

His friends, family and neighbors were contacted, asking them “questions” like “What do  you know about your neighbor being a criminal?” Of course, there was no evidence of anything of the sort, but merely asking the question throws doubt in the minds of people that don’t know someone.

He was followed when he went out of state,  Miscavige and his gang gaining access to airline reservations and dispatching their henchmen as far away as Seattle, Washington.

The staff of his company have been harassed and followed. One staff member, never involved in Scientology, in a now also familiar pattern, is being prosecuted based on false reports filed with the State Attorneys Office after he was approached by Miscavige agents at his home.

Miscavige’s minions set up an office across street to surveil Almblad’s office 24/7.  And because three grown oak trees obstructed the view, someone took a chain saw to them in the middle of the night and left the trees blocking the road.  ONLY the three trees in front of Almblad’s office – no others.

One of the chainsawed trees

From this vantage point, they noted everyone who visited Almblad’s office, and they too would shortly thereafter receive visits from “reporters” or “private investigators” now “investigating” Robert Almblad on behalf of the Church of Scientology.  It got so bad that a Church operative, “Freedom Magazine” hack Jim Lynch burst into a private hotel meeting room in Miami Beach to attempt to intimidate businessmen Almblad was meeting with.  Lynch of course left the scene of the incident before the hotel security could get police there.

These incidents had only one purpose in mind – scare away anyone from doing business with Robert Almblad. And in the process destroy the safe ice business and drive him into bankruptcy. With that, Almblad would be taught a lesson and Rinder would be unemployed.

The campaign to break Robert Almblad failed.  He refused to cave in to their intimidation tactics.

He sucked it up and continued to do his job.

Then, another familiar tactic – numerous websites purporting to be “Robert Almblad”  sites  appeared with outrageous lies and innuendo, intended to sour anyone from doing business with Mr. Almblad.  And then a “special edition” Freedom Magazines further libeling him.  Of course, Miscavige knows that as Robert Almblad finances his inventions himself, he will run out of money before he could recover anything from a protracted legal battle to disprove the lies and sue for contract interference.

It’s a game Miscavige is familiar with – bully with an unlimited budget squashing anyone he sees as a threat.

But Almblad still refused to buckle.  He bought a throw away phone. Rather than flying, he drove from Florida to business meetings in New England so he could not be followed. He used a different name so Miscavige’s agents couldn’t spread lies about him before he could get his foot in the door.

He was not going to give in to the bully.

And while Miscavige spread all sorts of untruths about Robert Almblad being a dishonest, money-motivated scam artist, his actions have proved the precise opposite. By refusing to buckle under, by standing by Mike Rinder and Marty Rathbun in spite of every reason not to, he has demonstrated a level of personal integrity and courage that is rarely seen.

Will he be able to get his safe ice invention to market? That is not clear. If he does, it will be in the face of tremendous odds. And if he doesn’t, Miscavige still won’t win as Almblad, Rinder and Rathbun will not be deterred from exposing his crimes. But the world will not see the benefits of safe ice machines thanks to the machinations of a megalomaniac cult leader bent on the destruction of anything that does not forward his agenda. And every person who gets the flu from eating unclean ice in a restaurant or contracts a disease in a hospital will know who to thank – and perhaps who to sue.