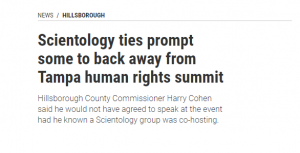 Following up on this piece, Scientology Human Rights -- An Oxymoron, Tampa Bay Times intrepid scientology reporter Tracey McManus managed to speak to a number of the people concerned as covered in the story above. It turns out that Hillsborough County Commissioner Harry Cohen was unaware of any scientology connection. Turns out people who read this blog contacted his office and he then found out about the link. “This isn’t what I thought it was,” Cohen said on Tuesday, confirming he dropped out of the event. “Scientology and a human rights summit, I don’t know they are compatible with one … END_OF_DOCUMENT_TOKEN_TO_BE_REPLACED