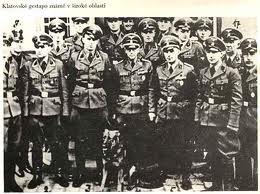 Miscavige has sent the storm troopers to lower the boom in South Africa.

The big question is whether the boom is going to crash right through the hull and sink his ship of fools down there.

The newest post on the African Scientologists Getting Back in Comm blog is reproduced in full below.

It is going to be very interesting to see what happens over the next month as there are LOT more disaffected South Africans than the 18 Opinion Leaders (and 6 OT VIII’s which has got to be a large percentage of the OT VIII’s in South Africa) they just turned into active enemies of the Corporate Church. (And he just put an end to his Ideal Org fundraising).

Can Miscavige and his jackboot tactics get this continent back under His thumb?

The Golden Age of Rod (UPDATED)

UPDATE: We can confirm that the following people have been declared by the Church of Scientology: Welcome to the first wave of the Golden Age of Rod.

Not one of these people received so much as an official phone call to inform them.

If the rumours we have been hearing are true we are about to see the launch of the Golden Age of Rod. We refer of course to the issue of Goldenrod declare orders.

There are a large number of people, approaching twenty names, who are long standing South African Scientologists that are to be imminently declared.

This coincides with the arrival on Monday of a 7 man Sea Org command/management team. No doubt this will stamp their “authority” on the local scene.

From a church standpoint it makes sense in a way. With the launch of the GAT II on the 23rd of November it would be able to “clean up” a very dirty field then launch GAT II and say “you see, when we win the SP’s go wild. But we’ve got it all in hand”.

In truth it is going to be a calamity of catastrophic proportions. They are trying to cut out a “cancer” that has become way to big to operate on. Attempting to do so may well finally kill off the patient.

Even die hard believers will begin to question the efficacy of church management. Perhaps not overtly but it will certainly start them on a journey of doubt and questioning. Especially since there has not been even a whisper of standard justice procedures such as a Comm-Ev.

This list of names, between them, are connected to at least half of the entire South African Scientology community. That’s a huge line in the sand and Scientologists will soon be forced to make a serious decision about disconnection.

It doesn’t have to be this way. Open up the lines of communication! Let Scientologists discuss and debate the future of the movement to which they have contributed so much.

A statement of fantasy. But really, if this were to happen it would at least begin the process of healing that is so desperately needed.

Of course these rumours may just be a ruse to try and scare people straight. That’s a tactic that has been used before. The coming days will tell.

Lastly, the new seven man team will be paraded at the Joburg graduation this Friday. Feel free to go along and then pass on the news so we can report it.