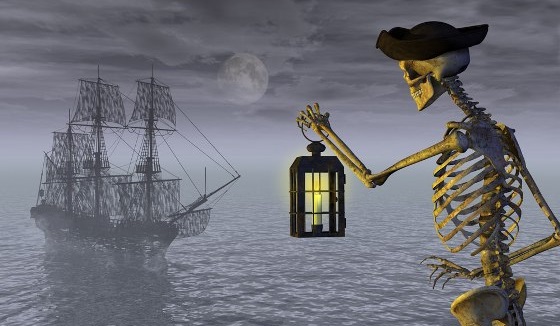 People send me information routinely on their visits to orgs, and I happened to get several recently from people who were in LA and also at Flag. I accumulate these because individually each one is not worth a whole post, but when there are a few they tell a story. In this case, apparently the rudderless ship is all but abandoned.

And it is interesting how the stories from different people in different orgs are all pretty much the same. And align so well with the information being imparted on the “Oh No Ross and Carrie” podcasts about their investigation of scientology at Los Angeles org (well worth listening to – humorous, insightful and honest).

There is no significance to the sequence of the orgs discussed and I have combined information from a number of people. The single overriding observation: The buildings are gorgeous but are uniformly empty except for Sea Org members.

LRH Life Exhibition: Someone recently took a tour – he was the only person in the place apart from two SO members.

Standing out the front were more Sea Org members “smoking like chimneys.”

Someone else walked in to the Information Center at 6724 Hollywood Blvd (the Hollywood Inn). This is where the hundreds of new starts that LA Org is getting on Introductory Services every week are supposedly coming from (certainly not the body routers at the corner of Sunset and Vermont – NUMEROUS reports tell us those people have absolutely NO success bodyrouting anyone, people refuse to take the tickets they try to hand them). At the “Information Center” there were three body routers out front – in Sea Org uniforms – and several more inside. The street is bustling right there – very very busy, lots of foot traffic. As far as customers – I saw a Latino man paying for something at the bookstore, but not another person except the 7-8 Sea Org members.  All of them were young and reasonably attractive.

Celebrity Center:  Someone responded to the sign out front “Open House, 9am – 10pm daily.” So, they walked in and asked to be shown around. They reported the parking lot was full – perhaps 50 cars (I don’t think they know there is a whole underground parking lot).  There were two women sitting in the lobby. While waiting for my tour guide, I asked each of them if they were there for the tour but they were not. One was an older woman who said she was being recruited to take courses. The tour guide walked me around the downstairs – I saw about 5 people in uniforms – no one else came in or left during the 20 minutes I was waiting and then being shown around. I then walked through the pretty gardens over to the café where I saw about 8 public scientologists. Definitely not bustling.

LA Org: Again, someone walked in the front door asking for information. They were given “a very brief tour” and were then “left among the videos and book displays. I was the only one there during the 15 minutes or so I was inside, and no one else came or left. I sidled by the course room and peeked in, but just saw three Sea Org in it but no one else.”

Interesting side note: The person when asked said they had tried to read Dianetics but it was so poorly written they couldn’t finish it. The “tour guide” explained that it “must have been the old version” and that it was “cleaned up in 2007, it reads much better now. LRH gave it to the editor but then did not read it or notice the mistakes after it was published in 1950 until his death in 1986. Only then after years of research were the mistakes found and corrected.”

ASHO: A recent ASHO student reports that in the Academy theory course room when he was there in the last few months, there were THREE students. And in practical there were 14. There were more people in the staff training courseroom than in the public course rooms.

Flag: Someone who was in the Flag HGC’s shortly before Christmas said there was hardly any public. The Super Power building is virtually empty except for the basement at meal times (the SO crew all eat there). The HGC’s in the Super Power building do not have enough pc’s, some of the auditors only have ONE pc for an entire week. The courserooms are empty except for some outer org TTC. That even the auditors are still given quotas to get IAS donations each month and are constantly asking their pc’s for money.  No surprise, apparently there is an influx of Russian and Venezuelan new Sea Org Members. But perhaps the biggest surprise — people who have not DONE the Running Program, still have NO IDEA what it is or that there is a running track on the 6th floor! You would think people would talk about this all day long if it really was the greatest thing on earth. Doesn’t seem to be a problem keeping it under wraps — people are probably ashamed to admit they have paid thousands of dollars to run around a pole….

The good ship scientology increasingly resembles the Mary Celeste or perhaps the Flying Dutchman. Creepy and bereft of life.

3. It’s not only dangerous to forward this message, it’s outright irresponsible and lazy on your part and you know it.

Do your friggin research, get your big girl pants on, and report the truth about this cult.

2. The "celebrity religion" narrative is what Scientology wants you to use so that they can lure in those who desperately want to make it in Hollywood.

1. Members of the media who refer to Scientology as a "celebrity religion" or "Hollywood religion" should know that you are using Scientology’s messaging and doing its bidding.

Four working actors and three people you’ve never heard of does not a “celebrity religion” make.

Woke up to the amazing news that our podcast was #29 on the Apple chart which is huge for a podcast that focuses on a single issue.

We are so grateful for your support and hope you will continue to tune-in.

73 episodes are available for download wherever you get your podcasts.

New episode of #FairGamePodcast now available. @LeahRemini and I talk to pioneering #scientology internet activist and founder of @oper_clambake Andreas Heldal-Lund (@spirous) Listen here: https://www.mikerindersblog.org/episode-73-operation-clambake-founder-andreas-heldal-lund/ or @iHeartPodcasts or wherever u get your pods…