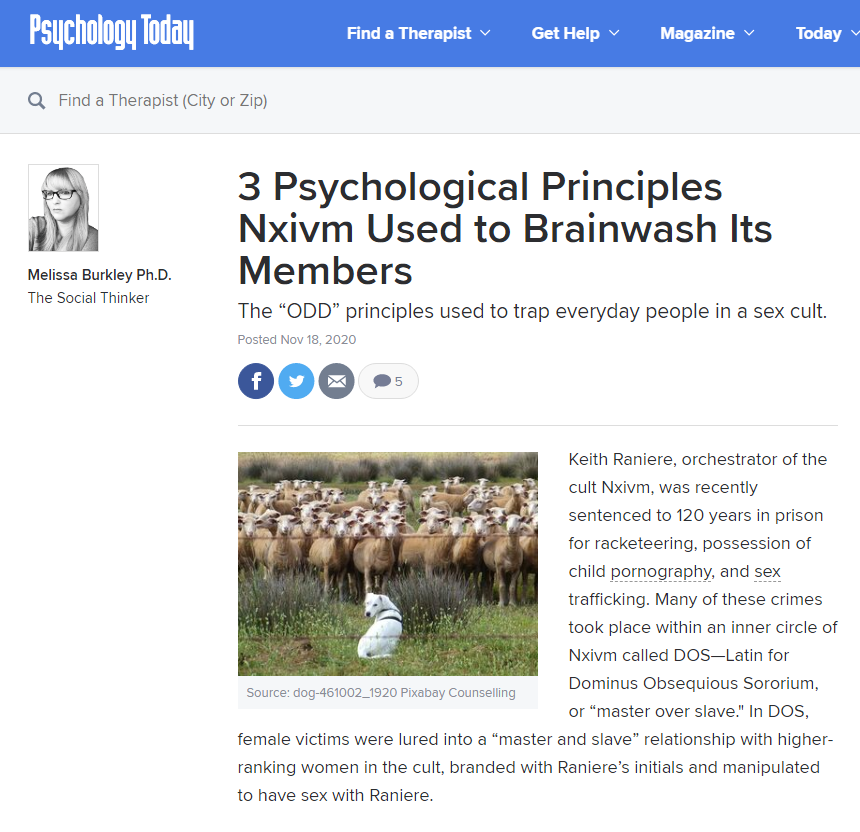 If you have watched either The Vow on HBO, or Seduced on Starz about NXIVM, or The Aftermath or Going Clear about scientology, this article will ring a lot of bells. Many of the specific control mechanisms Dr. Burkley cites about NXIVM have direct parallels in scientology.

As she says, “the psychological tricks Raniere used are not particularly special. In face, his ability to ensnare so many victims is rooted in his reliance on several core psychological principles — principles to which each of us is vulnerable.”

One of the great accomplishments of The Vow was how it showed why people got involved and how the slow process of brainwashing is carried out.

I have made a few comments within her article concerning how scientology fits these 3 elements.

Keith Raniere, orchestrator of the cult Nxivm, was recently sentenced to 120 years in prison for racketeering, possession of child pornography, and sex trafficking. Many of these crimes took place within an inner circle of Nxivm called DOS—Latin for Dominus Obsequious Sororium, or “master over slave.” In DOS, female victims were lured into a “master and slave” relationship with higher-ranking women in the cult, branded with Raniere’s initials and manipulated to have sex with Raniere.

Chances are that when you initially learned about this modern-day cult, your first thought was “I’d never get duped into joining a sex cult,” but you would be wrong. Recent shows like HBO’s The Vow and Starz’s Seduced have peeled back the cult curtain, giving us a peek at the group’s inner workings. I’ve watched both shows and what has become clear to me is that the psychological tricks Raniere used are not particularly special. In fact, his ability to ensnare so many victims is rooted in his reliance on several core psychological principles—principles to which each of us is vulnerable.

How did Raniere know what psychological buttons to push? Turns out, he minored in psychology as an undergraduate (a fact revealed on Seduced when his college transcript from Rensselaer Polytechnic Institute was displayed). Below, I’ve compiled a list of three “ODD” psychological principles Raniere capitalized on to manipulate and control cult members: Obedience, Deindividuation, and Depletion.

In Nxivm, Raniere was set up as an authority from day one. He was talked about by the other members like he was a celebrity and most members didn’t even get to see him in person until they had been in the cult for some time. Those who finally did gain access to Raniere often took 3 am walks with him during which he would randomly command them to do simple acts like sprint to a tree or lick water from a street puddle. These small acts served to establish Raniere as an unquestionable authority member and laid the groundwork for ever-increasing servitude. It also served as a test to weed out anyone resistant to his obedience techniques, ensuring that every woman who eventually joined DOS was unlikely to refuse his sexual demands.

This was Hubbard at the outset, but is very much the case with Miscavige today. He has unquestioned authority. He has people grovel at his feet upon command — literally lick his shoes or lick the bathroom floor clean. He comes up with the most sadistic and humiliating “tests of loyalty” and punishments. It is hard to fathom.

Raniere also ensured obedience from DOS members through his use of readiness drills. Female slaves would receive a group text from their female master, at any hour, day and night. The text would read, “Ready?” and slaves had 60 seconds to respond with “Ready.” If even one slave failed to respond on time, the entire group failed and they were subjected to grueling physical punishments. Like breaking a wild horse, this daily process trained the slaves to respond with almost knee-jerk obedience to their female master. Later, Raniere capitalized on this reflex by informing slaves that the master of their master was Raniere himself, which meant they didn’t just owe their female master obedience, but Raniere as well.

Sea Org members at the Int base were pulled out of bed in the middle of the night to be marched to the lake and thrown in the water, fully clothed. Or ordered to go “run around a pole” in the hot sun. Instant compliance was demanded.

According to The Vow, Raniere was a big fan of another infamous psychological experiment: The Stanford Prison Study. In this study, young, mentally healthy men were randomly assigned to serve as prisoner or guard in a mock prison constructed in the basement of a Stanford University building. Within just a few days, both groups appeared to have lost themselves in their assigned roles. The guards acted sadistic, forcing prisoners to endure humiliating or physically grueling punishments like sit-ups or brushing the toilet with their bare hands, in order to strip prisoners of their identity and encourage obedience. Similarly, prisoners started to see themselves less as a person with a name and more as a prisoner known only by the string of numbers on their uniform. Things fell apart so quickly that the planned two-week study had to be canceled after just six days.

Raniere relied heavily on this study’s procedures for a six-day intensive course within the cult’s SOP (Society of Protectors) group. In this course, men essentially served as prison guards and women (many of whom would go on to join the sex group DOS) served as prisoners. His guise for this course was that women needed to understand the suffering men went through in order to have empathy for them (but note that he never suggested the opposite — that men needed to experience the suffering women endure). The men humiliated the women by criticizing their appearance or weight, forcing them to hold painful planks for minutes on end, and using other techniques to strip them of their identity and agency. Outside of this course, women in DOS were subjected to even more extreme deindividuation techniques, such as having to photograph their own genitals, wearing a dog collar, being locked in a dog cage, and of course being branded with Raniere’s initials. The more these women were treated as objects, the less they saw themselves as people.

This is exactly what The Hole was. There were guards and punishment meted out to the “prisoners” and then among the “prisoners” themselves the abuse and violence became routine.

Research conducted by Edward Burkley shows that exerting self-control weakens our ability to counteract others’ persuasive messages. Put another way, if you deplete people of their self-control, they become more vulnerable to brainwashing.

Raniere capitalized on this principle by forcing Nxivm members to engage in a variety of activities designed to exhaust their self-control. Extreme dieting (e.g., 500 calories per day), sleep deprivation, winter walks at 3 am, and ice-cold showers were just a few of the daily occurrences women in DOS endured, leaving them less able to resist Raniere’s manipulations.

The “rice and beans” diet of Sea Org members is well-known. Take one look at the photos of me when I was in The Hole (see John Sweeney’s first Panorama program). Sleep deprivation is every day in the Sea Org.

We all want to believe we’d never be lured into a cult like Nxivm. But as Raniere’s right-hand man Mark Vicente said in The Vow, “no one joins a cult.” Raniere may not have had a genius-level IQ or been a Rhodes Scholar like he claimed, but he certainly had a good grasp of how to use basic psychology against people in order to get them to comply. And despite what we tell ourselves, we are all vulnerable to manipulation via these basic psychological principles.

To learn more about how basic psychological principles are used for evil, check out Zimbardo’s excellent book The Lucifer Effect.

There is a lot to know and understand about this subject. Much has been written about it by people who have spent their lives studying the phenomena. This is but a brief essay, but I have reprinted it because it is so succinct and easy to grasp. Dr. Burkley has provided a valuable primer on the subject. When I first read Martha Stout’s book, The Sociopath Next Door many years ago, it came as a bit of a shock to me to learn that there are exact characteristics of a sociopath that fit David Miscavige perfectly — that what I had experienced was not something unique, but was classifiable and definable and understood by those who specialized in the field. Even more importantly, it helped me break the indoctrination that my experiences were “my fault” and that I had caused the insanity of Miscavige because of what I had done to him… That I was a victim of a sociopath. It’s quite a revelation when you finally begin to see the light.