This is an essay contributed by a third-generation “Scientologist,” Elizabeth Gale.

I think it is an important message for many reasons.

Elizabeth comes from a prominent scientology family. She attended school at Delphi, Oregon, took courses at CCint and Flag, among other places, and had a stint on staff, though never joined the Sea Org. Her parents attained high level OT status – her father, David died in 1995 of heart failure.

Today Liz is a happily married mother of two. She has a Bachelor’s degree in Child and Family Studies from Portland State University. She believes Scientology techniques can be very very dangerous to the health and upbringing of children.

Ironically, Liz was featured in an article in the St Petersburg Times in 1991. Her mother, Marie, was seeking to present a good face to the world of the value of raising your kids in Scientology (and claims Liz is fourth-generation though Liz is not aware of her great grandparents being scientologists). That article is below. The photo is difficult to see, but the caption is priceless – “Happy Scientologists.”

This is Liz’s piece, but hers is not the only story of growing up in the scientology Gale family – her brilliant brother Philip, one of the founders of Earthlink, committed suicide as a teenager while attending MIT (he was accepted at age 15). That is a story for another day. 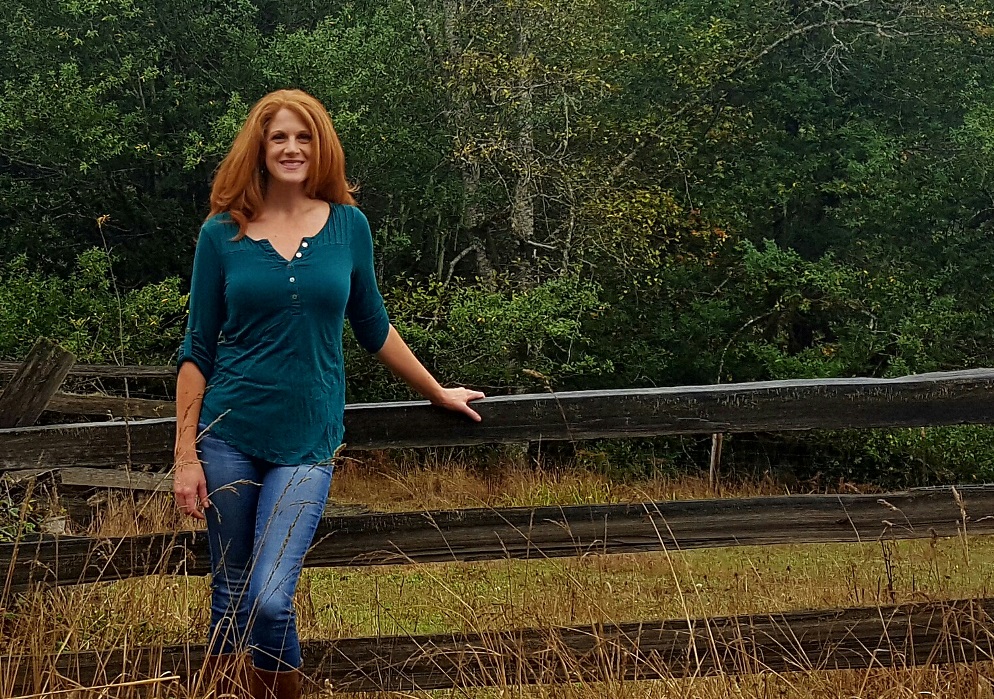 Why I Cut Ties With My Scientologist Mother

Today I cut ties with my mother, the most dedicated Scientologist I know.

Why did I end our relationship? Because I was raised in the Church of Scientology. I was slated to be a third-generation Scientologist, if I hadn’t grown up and rejected it. I have grown tired of living under the constant emotional fear and threat that Scientology represents in my life. I am tired of the anvil of disconnection hanging over my head, having to tiptoe around my feeling and the ridiculous requirement to pretend Scientology is okay.

Today I ripped off the band-aid that’s been festering my entire life.

Don’t get me wrong – my mother is not a festering band-aid. Not even close. She is a nice lady with a funny laugh and generous spirit. She is a good Scientologist, above all else. She has lived her life in full dedication to, and deeply entrenched in, the policies and dogmas of L Ron Hubbard. It is her eternity, her salvation – her one true religion.

Growing up in a Scientology home, the worst thing you could do was talk negatively about Scientology, or share bad news about it. To come out in the media against the church was worse than murder, worse than suicide. You would be “declared”, and then all bets were off.

Growing up, Christians had hell – we had being declared.

So what are you supposed to do when you find out Scientology is a scam? What is the appropriate reaction upon finding out you were raised in a cult? How long can you keep surrounding yourself with people, employers, friends and family who expect the same ideology from you before you go crazy?

At some point, you have to make the choice for yourself – stay and keep pretending or get the hell out.

When you do leave, you’d better be prepared to lose everything.

Surely you’ve seen the documentaries or tv specials – leaving the church of Scientology can be brutal if you do so openly. Many people feel they must quietly tiptoe away. Maybe move away for a summer, pretend you never came back. Everyone has their sly way of staying out and backing away from the church without calling attention to themselves. We call this living “under the radar”.

It sounds kind of fun and cool to say you’re “under the radar”, like you’re on some sort of stealth mission. It’s not cool, though you must be stealthy. You’d better watch what you say and who you say it to. Don’t critique Scientology in conversation, online or even in family discussions around the dinner table. Don’t watch any documentaries (cancel HBO in case it shows Going Clear). Don’t read any books or articles that share any anti-Scientology or pro psychiatry or mental health ideas. Basically – don’t mention anything about Scientology unless you are going to sing its praises.

After a decade or two of living “under the radar”, I am exhausted. I am tired of the mental fractures it has caused for me. When you feel one way but you must do, act or say something opposite of that feeling, it breaks you down. Throw a little guilt, some family pressure and an eternity in the doghouse – well, that’s a panic attack waiting to happen.

I must take a stand.

I will no longer be held responsible for my mother’s ability to do Scientology by having a “suppressive” family member. I will not accept the threat of disconnection or disinheritance if I speak out against the church or its practices. And I won’t allow the chance that my children will be exposed to, coerced by, or fooled into believing Scientology is the answer to humanity’s problems.

It has taken me almost ten years to get financially stable, emotionally ready and spiritually strong enough to come out from “under the radar”. I have come to the conclusion that the practices of the Church of Scientology, and its fundamental belief system, are corrupt in their very core. L Ron Hubbard did not have answer to personal relationships, how to solve drugs, crime or war. He did learn a lot of about hypnotism and mind control, which I believe he used to make money from unsuspecting followers.

And lastly, I firmly believe that practicing security checks (interrogation), hard labor and separation from family on young children creates unhappy children. I should know, for a long time I was one of them. My older brother committed suicide at 19, so I’d go so far as to say he was one too.

So today I say goodbye to anxiety, the fear, the threat of losing my family. Because I have a true family that I will never abandon, and I will never choose religion or dogma over. What I have given up today is a mother who has learned how to love from the Church of Scientology – a type of love that can be taken away at any moment. A type of love that is contingent upon keeping quiet about Scientology’s abuses. Now that I have been free to learn about other religions and ways of life outside the thought constraints of the church, I know this is not what real love is.

‘Aint nobody got time for that.

So today I say goodbye to the spiritual extortion. I say goodbye to threats, to silencing, to censoring and to ruling with fear. I don’t blame my mother for these things, but she is still playing the Scientology game and I want out. 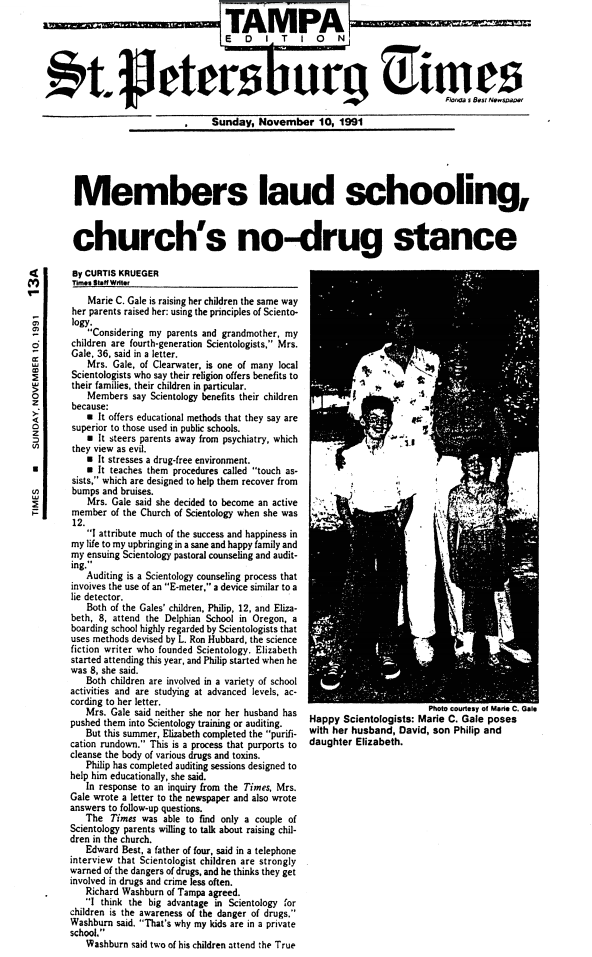 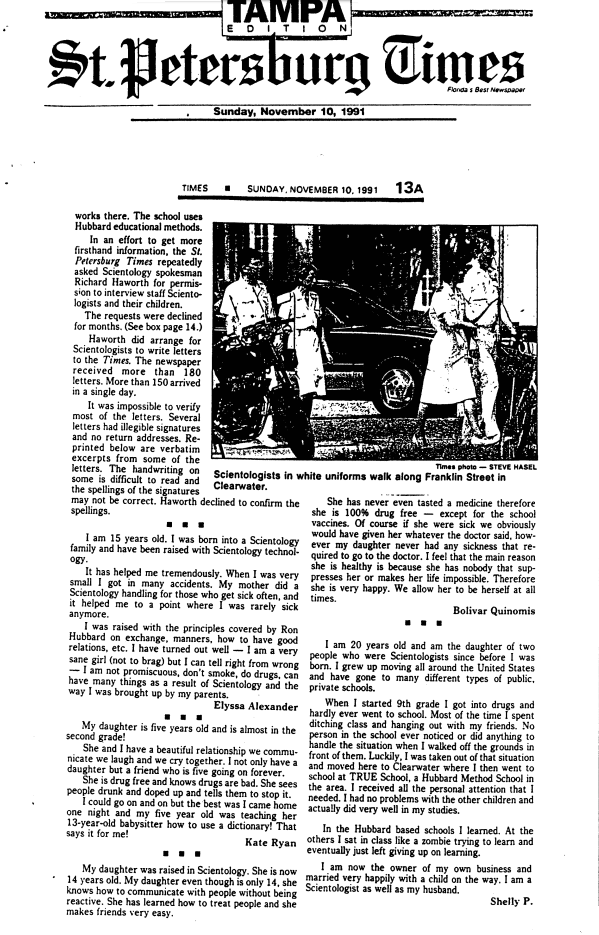