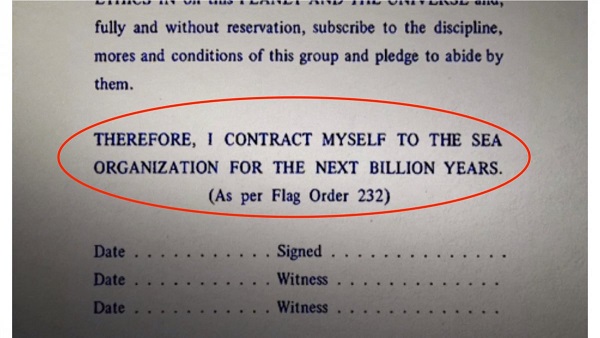 Many people wonder how people in this day and age are recruited into the Sea Org. If you have Google, I think the chances are that you might check it out before you sign a billion year contract for anything.

And that is part of the answer as to who the few are that join the SO today.

SO recruits come from two buckets:

A. People in less fortunate countries in Eastern Europe and Venezuela who are offered a visa to the US, room, board and a job.

B. Children of scientologists.

The first category are pretty easy to understand. If you lived in Ukraine and had someone tell you you could get a job in the US, would be provided a visa, flown there and would be given guaranteed housing and food it would be an attractive proposition. A certain number of people without marital/child commitments could agree to join up. Some may be deterred by Google searches, but most would no doubt figure it could not be worse than their current circumstances.

Children of scientologists are a little less understandable until you realize that scientologists indoctrinate their children from the earliest age that any bad news about scientology is simply lies — stories told by a handful of bitter apostates trying to make money Off the good reputation of LRH and Scn.  And on the other hand, they have been indoctrinated from toddlerhood to believe that scientology has the answers to everything. But even then, how do you persuade a teenager to leave the comforts of home and family and give it all up to join the SO?

By appealing to the following “buttons”:

LRH was in the Sea Org and devoted his life to it, so therefore you should not be so selfish

You will not have to deal with the distractions of the “wog” world – no mortgage, car payments, commute to work etc

And then dishing up lies about what things are like in the Sea Org:

You will live in a fully renovated apartment – typically you will end up in a dorm with bunk beds piled 3 high and one bathroom fr 12 people.

Three great meals a day — except for when the food allocation is less than $1/day per person or the org (or you) is assigned rice and beans. Which is often.

You get $50/week pay — except when you don’t, which in most orgs other than the FSO, is often. W2’s of SO Members at Gold for an entire YEAR have often been just a few hundred dollars. For a year.

You will get the best medical and dental treatment “we even have our own medical and dental staff in the Sea Org.” A couple of SO bases have dentists, but only the top of the org board generally gets any treatment. The SO provides medical “care” on a “need” basis. You will be taken to an emergency room if you break your leg or sever an artery. But could wait months to get abdominal pain checked into depending on whether anything can be allocated in FP (and if there is one staff member who requires serious medical attention they may use up the entire allocation). The Sea Org operates on the theory of being “self-insured” as it is “cheaper”. But money is NOT set aside for routine medical costs.

All Sea Org members get 3 weeks leave a year – virtually unheard of these days. You are considered a dilettante if you take time off to do “wog” things.

You get free auditing and training – the only thing you will likely get is courses for your post. Other training is rare.  Auditing even rarer. The datum “there is no case on post” becomes the senior operating policy of the SO.  And any services you do get will be added to your eventual freeloader bill.

You will get 2.5 hours a day of “enhancement” (auditing or training). Rarely happens. Every now and then there is a push to get people to “go to study” and that lasts for a week or two and then falls out. Most Sea Org members do not get enough sleep each night to be sessionable/studentable.

They will promise you can go onto a specific post like the TTC.  Or become a musician. Those promises are forgotten once you are done with the EPF indoctrination and know the group is everything and you are just a small cog honored with the opportunity to save the planet by washing dishes. And if you DO complain or protest, you will treated as an “ethics particle” and be put in for sec checks to find out why you are “critical” and “CI.”

And when it comes to the final close, SO Recruiters often tell people that there is confidential information from LRH that the world is ending soon.  To support this they will put out public writings like “there is not an eternity of time on this planet” blah blah. This is the ultimate “scare close”.

I am sure I have missed plenty of things from the list. I would be happy to hear from readers who know of other things that should be added (which I will do). I would like to make this a document that could be used by people seeking to help provide information to anyone who might be considering signing a billion year contract.