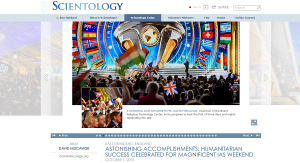 Scientology is patting itself on the back following the 34th annual IAS event. A few morsels of mulleted magnificence to set the scene -- and this was just the preamble to get to the actual avent: East Grinstead appears as if from a storybook, a medieval marketplace... ...blissfully tranquil ...wave upon wave of attendees, their anticipation abounding. ...the crunch of stone and gravel below boots and high heels echoed down the drive, dusk turned to night and an evening of wonder was now poised to begin. It was the typical stream of adjectival excess that sprang forth in the strange … END_OF_DOCUMENT_TOKEN_TO_BE_REPLACED