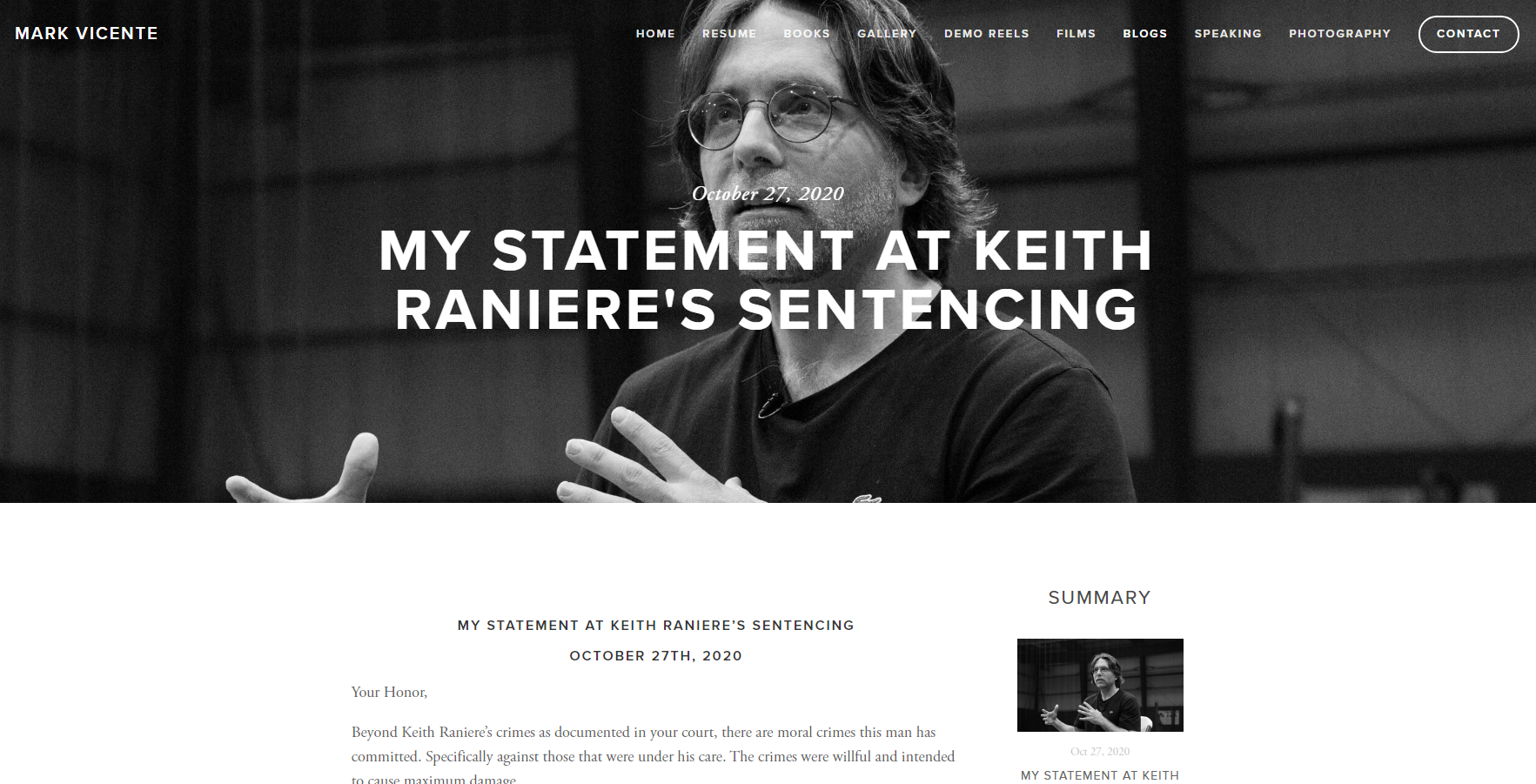 Keith Raniere, the former head of NXIVM, was sentenced to 120 years in prison yesterday.

One of the main people who brought him to justice was Mark Vicente. A former leader in the NXIVM movement, he and his wife, Bonnie Piesse, along with Sarah Edmunson and her husband Nippy Ames and Catherine Oxenberg were chronicled in the excellent HBO Series The Vow about their awakening and subsequent efforts to bring the leaders of NXIVM to justice.

We interviewed Mark on the Aftermath Podcast a few weeks ago.

Victims in criminal cases have the opportunity to make a statement before the court with respect to the sentencing of a defendant who has been found guilty of a crime. This is Mark’s statement.

MY STATEMENT AT KEITH RANIERE’S SENTENCING

Beyond Keith Raniere’s crimes as documented in your court, there are moral crimes this man has committed. Specifically against those that were under his care. The crimes were willful and intended to cause maximum damage.

There are the physical things Raniere has done to people. Coerced them to starve themselves, sleep depravation, cutting them off from their friends and family, closing doors on their life and career opportunities, shunning, terrorism by litigation, branding, triangulating his students against each other, maliciously squandering the child bearing years of dozens of women, convincing people he knew better than their doctors… resulting in them forgoing medical treatment they should have had. These are all terrible things. But it is the psychological and existential injuries which will continue for the rest of our lives… that I find the most heinous.

You have done irreparable harm to peoples psyches. To their self-esteem, their belief in themselves and their experience of sanity and well being. Their qualia of existence.

I believed in you. I believed in your mission. Because I thought it was the same as mine. I believed you knew what goodness was. Finding out the truth about you and your actual motives turned my world upside down. You broke goodness. You cracked the firmament of my belief in nobility and honor and righteousness. I do know how to repair it. I do not know if it can ever be made whole again. I fight everyday to try and recapture something that now feels lost.

This was not by accident on your part. When I was writing the film Carbon Crimes, you wanted me to craft a female character of innocence and good will. Someone who worked for a leader she believed in with all her might. She then finds out he is in fact a very bad man with very bad intent, using everyones pursuit of goodness for his own ends. You described to me how it would break someone like that and how she would never be able to heal from it. She would never be able to find goodness again. It would be forever poisoned. You knew exactly what you were doing to me and many others. The loss and the pain is incalculable.

And the worst part… the truly sick part of this is that my trauma, the desolation of my psyche is your great joy.

As the founder of the Society of Protectors, you told us constantly to MAN UP. To strip ourselves of everything to find our true self. You told us on a daily basis how in the worst circumstances we could find joy. Remember how you quoted Albert Camus; “In the midst of winter, I found there was, within me, an invincible summer.” And yet here you are suffering about how miserable you have been in prison without your comforts.

Your ideology was all false bravado. A boastful lie.

You made us believe we were constantly failing a standard you are wholly incapable of meeting yourself. You just wanted to destabilize our psyches as much as possible so that in our growing psychosis you would be the savior, watching us get worse and worse. Like poisoning us and watching us die slowly. Our happiness wasting away. That is your true joy.

You could at least have the decency to admit what you wanted was so very primitive.

You and your followers need to ask yourselves one important question. How did you Keith Alan Raniere cause this? Stop being a victim. Stop suffering. The world’s reaction to your omnipotence did not cause your present circumstances. Your evil did…

You will never know true love. You have to calculate everything.

While I will struggle for the rest of my life with what you have done to my mind and my soul… I can FEEL all those things you cannot. My morality is intrinsically mine. Your emptiness is yours. Forever and ever.

I spent 12 years studying this man. He has a belief that he is the next evolution of human-kind. Beyond worldly ethics and morality. Far superior to this court. He thinks he breathes the rarified air of an awakened genius. But he is none of those things.

He is a malicious, petty, evil and dangerously vengeful sociopath who thrills at our pain, and yet barely a glimmer of that excitement is visible on his blank face and his dormant eyes. He has been a lascivious little toddler with too much power and ZERO accountability. He has stolen hundreds of years from all his victims and poisoned their existence… poisoned my existence… and he needs to be held accountable.

Thank You for your time.