I came across this the other day.

It is a High Winds magazine from 1995. High Winds is the “magazine of the Sea Org” and only a few were ever published, usually to commemorate “Sea Org Day”.

This is the edition where Captain Miscavige (he now considers referring to him this way to be improper/derisive and had his lawyers complain about it in court — because it indicates he is the capo of the SO and he fears this being used in litigation to hold him responsible for the things he is actually responsible for…) announces the “requirements for the release of new OT IX and X”,

Of course, there is no “new OT IX and X” but that is a story for another day. It has actually been told quite often including by Marty Rathbun at his blog, back when he was not being a shill for scientology.

Miscavige knew there was nothing — but he also knew that at the Hubbard death announcement event, it had been stated that Hubbard had “completed the research through new OT XXIII” (or something) in order to give the impression that he had “knowingly and willingly dropped the body which had become an impediment to further OT research” (paraphrased because I cannot be bothered to go and find the transcript) rather than the truth which was that he was in failing physical and mental health and had died after a stroke (not his first) without leaving ANY message for scientologists at all (the biggest “omitted” of all in scientology).

So, Miscavige came up with a list of “requirements” that he knew could never be attained.

You gotta love #2. After proclaiming this as a requirement he subsequently “withdrew” the SHSBC as being “out tech” and a decade or more later it is STILL not available. Remember, this is the course that indisputably, Hubbard taught himself. The only one in scientology. How do we know? It consists of a sequential study of his 350 or so lectures to students on “The Briefing Course” at St Hill in the early 60’s. It is PURE Hubbard. It also tends to teach auditors that the methods of Golden Age of Tech and Golden Age of Tech II are NOT how Hubbard did things and that’s a big no-no for Miscavige. 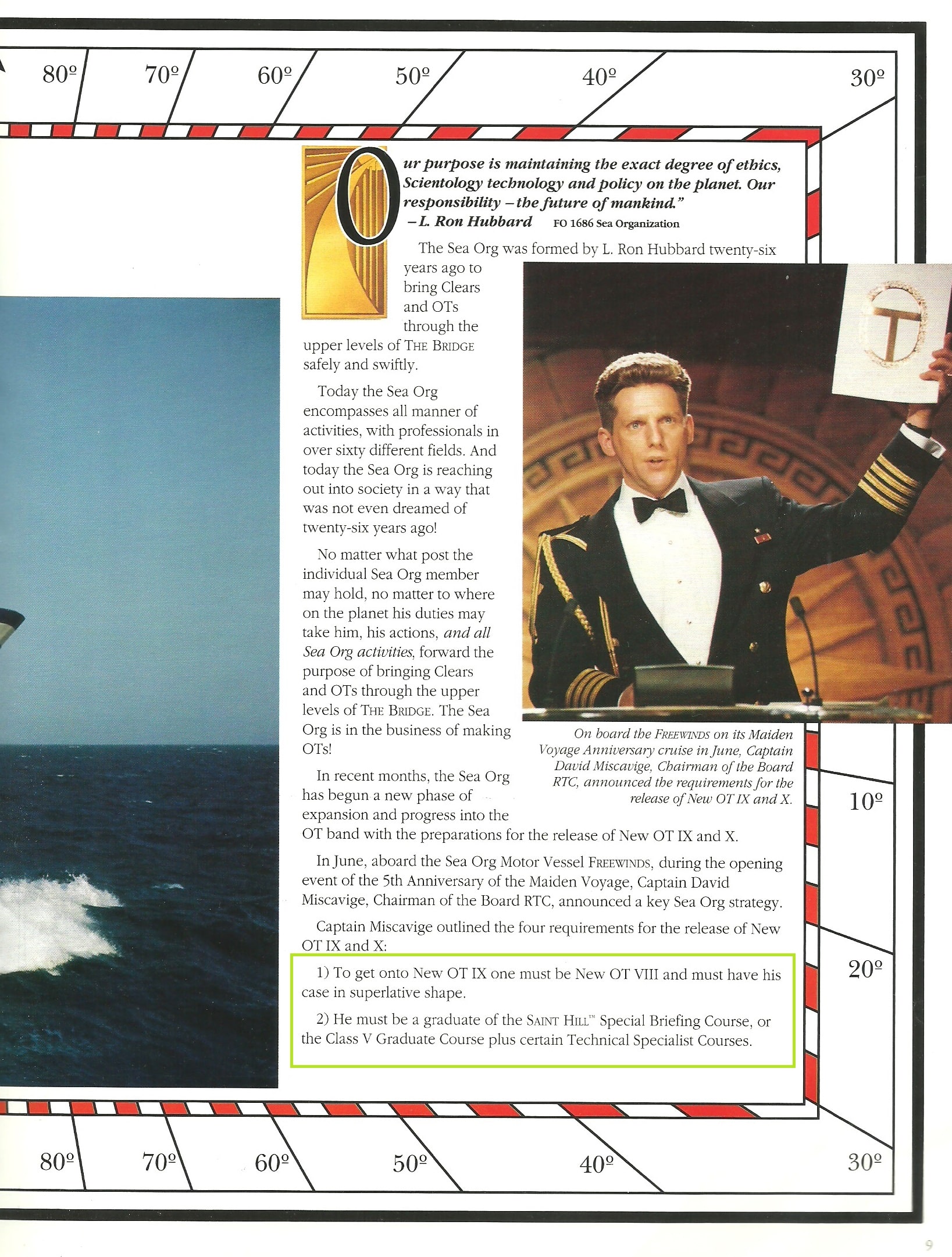 #3 is also a doozie. Since that time, no org has achieved St Hill Size. In fact, HE has diverted all efforts from building SH Size orgs to raising money to buy buildings for “ideal orgs”.

If you believe in Hubbard — which Miscavige and his followers profess they do, “the Commodore” laid out what had to be done to build a SH Size org. And he NEVER mentions buying a building. In fact, Hubbard’s genius plan was to do “5.4X plans” for every part of the org and that the “International Executive Strata” would be there to help make them happen. Miscavige also disbanded the International Executive Strata by putting all of them and the ED Int into The Hole. If anyone else had done such destruction to clearcut directives from “Ron” they would have been pilloried as an “SP Squirrel” an declared Fair Game.

And #4 is a failsafe in case everything else miraculously gets done, so he can say “Oh, the environment is not yet safe. We need $100 million to eradicate psychiatry.” 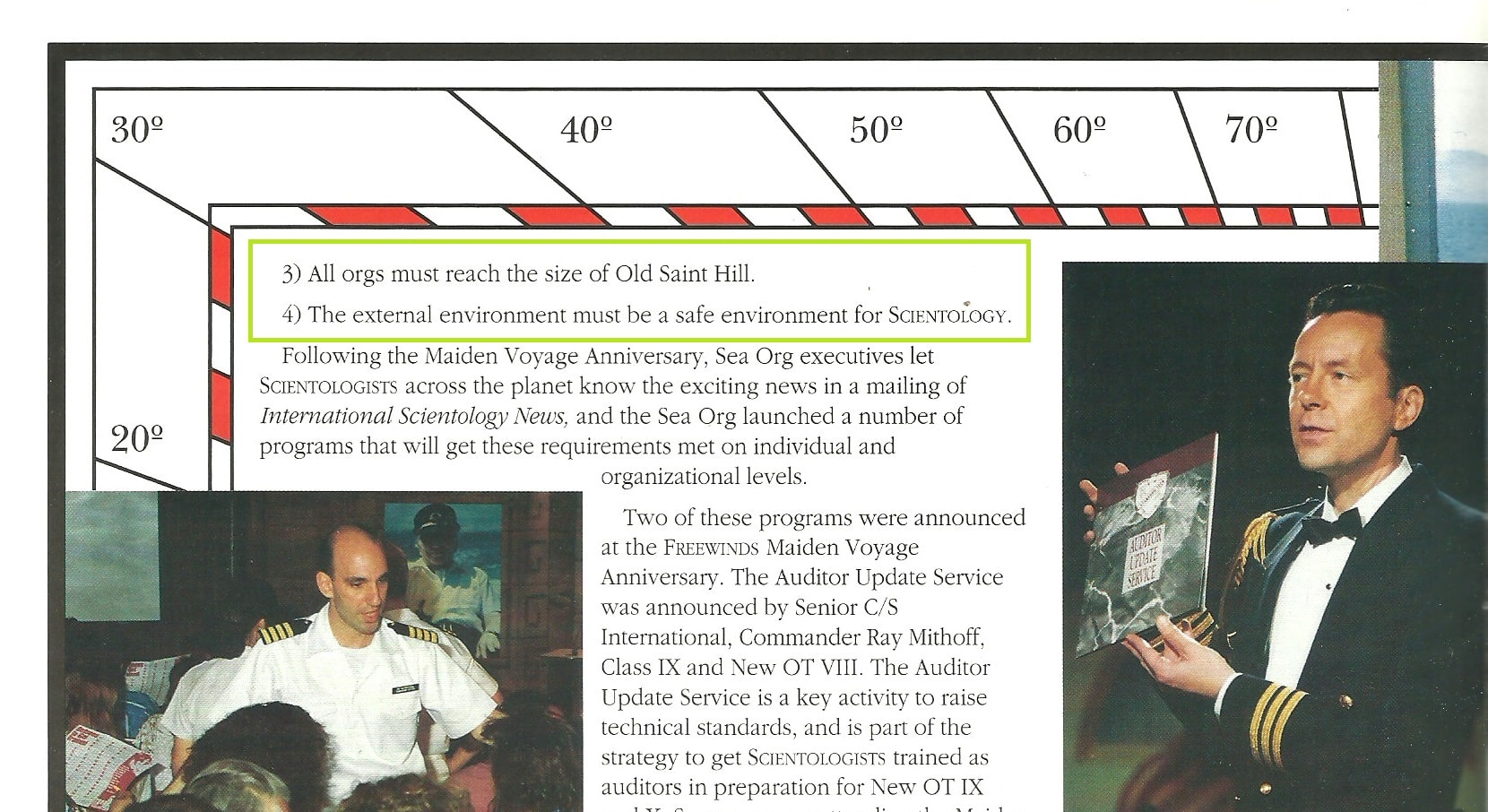 Marc Yager (brevet Captain who is now swamper Yager) and Ray Mithoff also make an appearance here. This is before they were banished by Miscavige.

The clubbed seals that are still thinking OT IX and X are coming should actually step back and look at reality.

Hubbard never came up with any new OT levels — he was still trying to get rid of his BT’s to the very end.

And even if he had invented some new “levels,” the person who is lauded for leading everyone to the holy grail of the “real” OT levels is in fact the pied piper leading the lemmings down the garden path. The only thing this “push for OT IX and X” has accomplished is fattening the bank accounts and real estate holdings of the organization. Not a single thing for any scientologist.