Thursday Funnies have been postponed to Friday in order to update the happenings in PAC.  I was out of town all day yesterday so didn’t have a chance to compile the information sent in from various sources.

This is clearly a topic of considerable interest and The Funnies won’t lose their funny in a day….

Tonight (Friday) is the Big Spin presentation of “greatest expansion ever” news with the combining of two Day and Foundation Orgs and the wholesale “letting go” of the contracted staff of the Model Ideal Org. 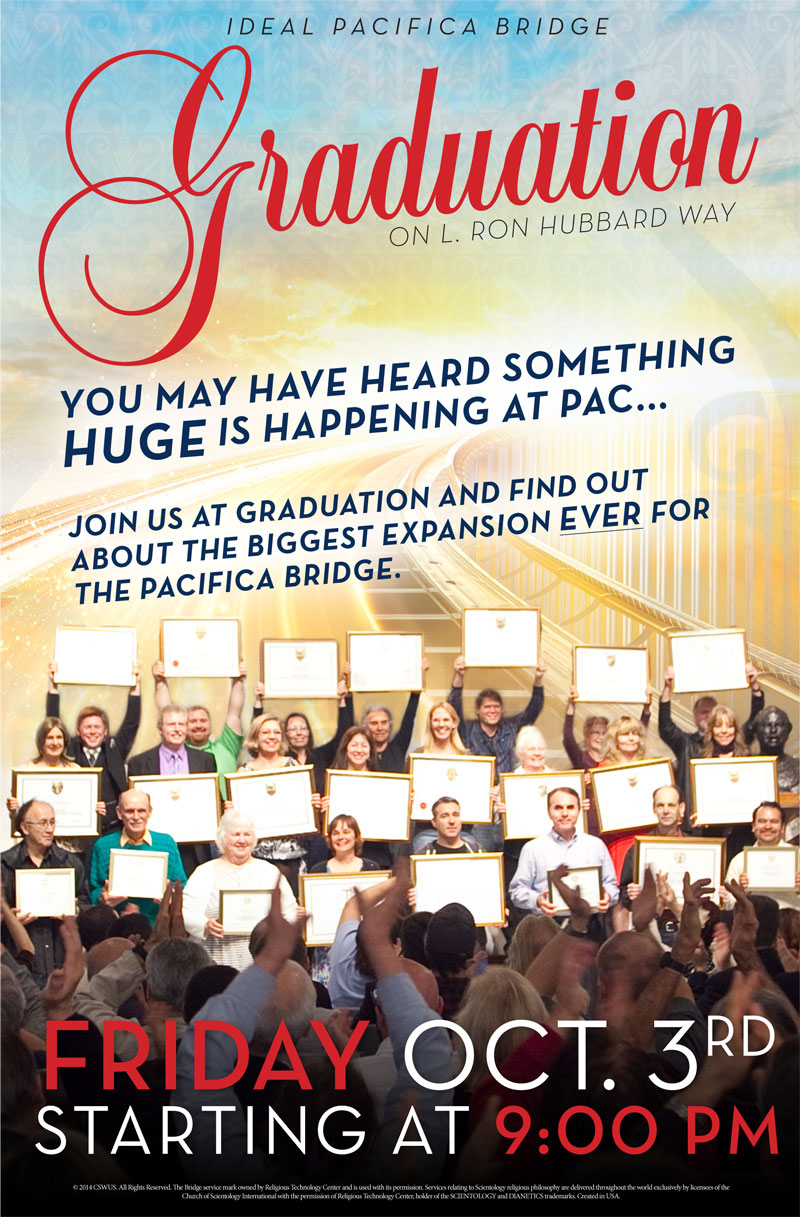 What is astonishing is that as long as ANY news is presented as “expansion” or “great news” it is apparently swallowed without even being chewed.

How the recently declared “Ideal Pacifica Bridge” and “Model St Hill Size Ideal Org” could so rapidly be replaced with something completely different is an act of sheer audacity. And not only do the sheeple not blink, they gaze glassy eyed at what is paraded before them and bleat approvingly on cue.

Just a few months ahgo, Dear Leader was proclaiming the Pacifica Bridge as the embodiment of everything LRH wanted in PAC.  Was it then just his “oversight” that he forgot that ASHO Day and Fdn should be turned into a single org and their CO’s removed and the Class V staff in LA Org should all be dismissed and that too should be turned into one org? It would be like Steve Jobs announcing a new iPhone and then two months later saying “here is the real new iPhone, and this one has a color screen and you can connect it to the internet” without ANY mention of how come they made a big deal of the previous one as if it was the greatest thing on earth, but clearly they already knew what they planned to do a couple of months down the line.

Of course, the truth is that both ASHO and LA Org (like every other org on earth) have been struggling to keep their lights on. As the weeks have gone by since the big reveal of the Ideal Pacifica Bridge it has become more apparent to ANYONE who didn’t walk around with a blindfold on that they are NOT expanding, but continuously contracting.

Something drastic had to change. Miscavige knows that after the big announcement of the “ideal PAC” there are too many people in LA seeing the place increasingly resemble a morgue.

A message had to be sent. The executives of ASHO had to have their heads put on a pike (they have been shipped off to Flag — out of sight, no doubt pulling weeds at the Hacienda and NOT in public view). And to demonstrate something more being done than just “bust the CO’s” the orgs were “combined” in a massive “expansion move.” At least that’t the PR pitch. How combining two orgs equates to expansion, I guess the lucky audience will hear at graduation. I suspect the explanation will closely resemble the old standby “because we say it does.”

And LA Org was even MORE dramatically failing. That Test Center is a total bust. The org is hardly capable of paying ANY bills. They have empty course room and unhappy, unpaid staff.

A BIG statement was needed for this problem. And in classic Miscavige fashion he overkills it. He has used this technique many times in the past — overwhelm with force and numbers. So, he rounds up 230 unutilized SO members (there are PLENTY of them, half of management is not on ANY post — the FSO is WAY overmanned for their measly delivery stats) and sends them in to LA Org to create a “Big Bang.”  Nobody would have ever dared come up with this sort of plan. If someone had presented it to him as a “bright idea” they would have been shot for being “completely CI to LRH intention for LA Org.”  But as it was HIS solution, it will proclaimed a “slam dunk” brilliant handling that only the bold genius of Dear Leader could come up with. And he will dismiss all the “LRH advices” that he has been cramming down people’s throats for years about how incompetent they are for failing to make LA Org grow as being “complied to with this handling.”  The truth is that he has NEVER been able to build any Class V orgs (or Missions) and scientology is dying because of it, as there is NO flow of new public.

All the other “ideal orgs” are too isolated from one another for anyone to get the big picture. But LA Org is different — it is seen by the AO public. And a LOT of SO members. And all sorts of scientologists in PAC who are told to attend different events in PAC.  The failure of LA Org could not be allowed to continue for too long. He just could not afford it. It would destroy the illusion.

As I said, he has no idea how to build a Class V org (frankly, it’s not just Miscavige who has not managed this task — NOBODY has done this for any sustained period in the history of scientology).  So, the only option was to make a big show and have 230 Sea Org Members arrive all at once. That he can control. They can be ordered around. He couldn’t even order Class V staff around to man up LA Org — so it HAD to be Sea Org Members.

I am sure behind the scenes he is telling everyone “this is how you do it” (like anyone else will be able to send 230 SO members to NY Org or Copenhagen Org let alone Dallas or Malmo). It’s a one time desperation move that is not a pattern for anywhere else on earth….  I am also sure the poor sods who have been sent to LA Org have been informed that they have been useless, SP freeloaders sitting around doing nothing while COB has had to “do it all by himself” and this is their chance to “make up the damage” and get something useful done by getting in some GI.

Those are my speculations about the behind the scenes reasoning that has resulted in this bizarre week of events in LA.

Following is a summary of information forwarded to me from people in LA (along with a final, rather interesting commentary about the Hare Krishnas). They are in no particular order and come from 5 different sources. I have not repeated duplicated information but included what was sent pretty much verbatim:

The scientology bubble is shrinking and it’s a madhouse in there.