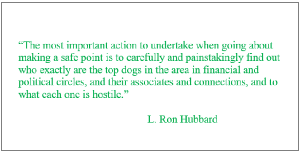 Our friend ISNOINews provided another interesting article that I felt was more important than being left as a comment on a disrelated topic. This is a lengthy article by Alex Rubinstein on a recent event held in Washington DC that scientology participated in. Alex has some fairly extensive mentions of scientology in the article, which I have excerpted below. The entire article can be found at the link above.             Using a friend’s company on my application and adopting a fake persona, I attended a three-day summit on religious freedom where                      leading … END_OF_DOCUMENT_TOKEN_TO_BE_REPLACED