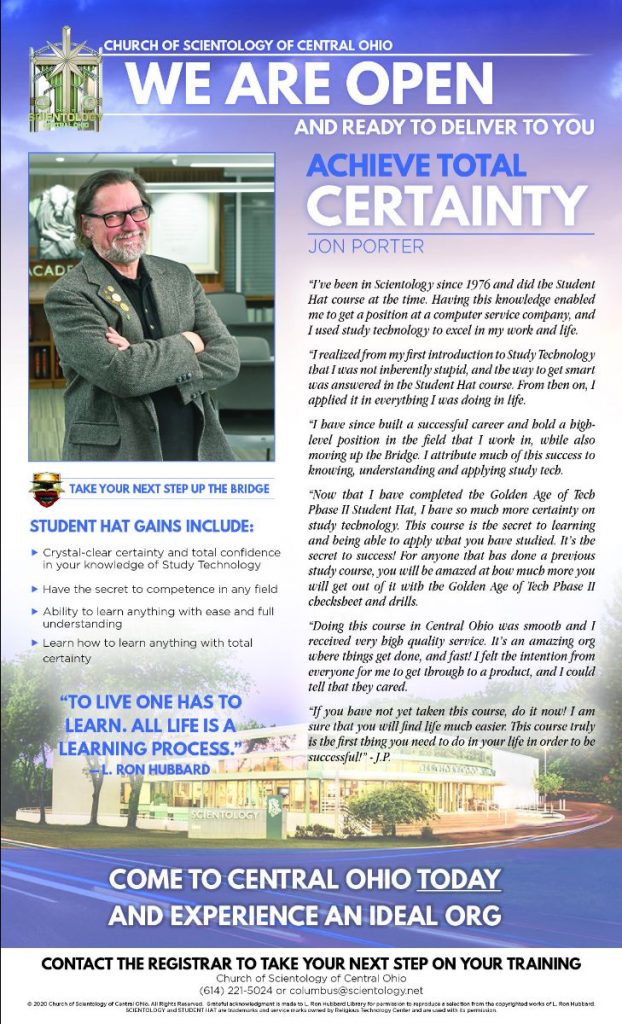 Total certainty is a much discussed subject in scientology. Hubbard promoted this often, telling people that scientology would bring them total certainty. He even named one of the first magazines of scientology “Certainty.”

But is certainty really such a good thing?

Certainty is the antithesis of knowledge. When you are certain you know things, it is impossible to teach you anything further. If you are certain the earth is flat, there is little point in providing evidence that this is not the case because that evidence will be rejected. The term is “thought-stopping.”

And on top of that, can one truly claim, as Jon Porter does above, that you gain certainty from knowing Hubbard’s rules of how you study? It’s a strange definition of certainty that you have learned to look up words you don’t understand. And oh boy, that certainty is SO MUCH GREATER when you do the GAT Phase II Student Hat than when you did the original one in 1976, though not a single piece of Hubbard “tech” on the subject has been added since then.

More of the delusion of scientology.

This is a comment from my old friend Bruce Ploetz — one of the smartest people I know. He was the audio technician at Gold for many years. I think his comment is worth preserving for anyone who reads this article and may not take the time to go through all the comments.

One of Hubbard’s most idiotically destructive statements:

Knowledge itself is certainty. Knowledge is not data.
– L. Ron Hubbard

It is even built into the very name “Scientology”, the science of knowing how to know in the fullest sense of the word.

Like our missing friend Foolproof who liked to say he could know things just by knowing them. Sometimes called OT knowingness, they just emulate Hubbard by pulling some assertion out of their nether fundaments and parade it before all the world as settled truth.

Scientologists work very hard at this. Every time you go into session you have to make unverified assertions and stand by them. An example, one of the questions in “Book and Bottle” (Opening Procedure by Duplication, don’t bother trying to understand the name it is gobbledygook). “What is its temperature?”

You are supposed to name a temperature. At best it is just a guess. Honestly, you could say “between freezing and boiling”. Without a thermometer you don’t really know. But you will be asked this question again and again, among other equally trivial questions, for hours. Any answer you give will be accepted. Authoritarian coercive training in knowing how to know without actually knowing at all.

Even worse, in other counseling procedures you are asked to make up stories by the bucket load. They ask for a memory, say for example a time you had a pain in your hand. If you get vague impressions, odd dream images, all will be accepted if it seems to remotely answer the question. If you come up with something they will probe with defining questions like “When was it?”

You will be asked to go over it many times, coming up with ever more detail. Before you know it, you have a fully developed false memory. We know from the recent work of mental health professionals that such a false memory can seem just as real as your real memories. Suddenly you know something that never was!

In the real world you gain certainty by testing the assertion. It is perfectly proper to come up with a tentative fanciful hypothesis that you think could explain the available information. Then you have to go through the rest of the steps of the scientific method to achieve any kind of certainty about it.

In the real world, some things will never be completely certain. Some assertions can’t be falsified, which means there is no test that can be done to disprove it. Such assertions are simply too vague or imprecise to even be verified. Useless.

Even after rigorous application of the scientific method, there is no absolute utter certainty. Tests may be imprecise, or there may be more to know. This is the glory of the scientific method. We can say an assertion is tested and duplicated by other researchers well enough to give some confidence in it. Never that it is uncontrovertibly True. Only faith can achieve that, and even then there is always doubt.

But as long as there is some uncertainty about even the most established scientific truths, there is room to grow. Newton explained the motions of the planets, but never fully described how the laws of gravitation really work. It took Einstein to do that, but even today there is more to learn.

Absolute certainty is a form of living death. Life with the blinders fully clamped to your head, no way to grow, nothing touches you and you touch no-one. Trapped in your fantasy, no escape to reality.