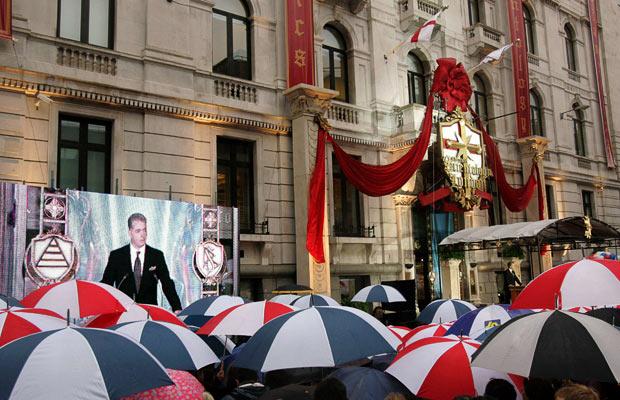 Bob Keenan was formerly posted as the LRH PPRO UK, but was David Miscavige’s “go to guy” in the UK.  He had a relatively short career as one of Dear Leader’s pets.

When Miscavige was in the UK for the IAS event or any other activities, Keenan was “the man”.  He picked up Miscavige from Farnborough Business Jet Airport when he arrived in Cruise’s Gulfstream with a little convoy of rented Range Rovers and BMWs. He arranged special food.  He oversaw “security” and acted as a personal “bodyguard.”

As LRH PPRO he worked in the Manor, just downstairs from the private office suite of the great man himself. Miscavige took over most of the second floor so he would have a suitable office in keeping with his station in life. (Miscavige also took over the bedrooms on the third floor for himself and his entourage — Miscavige took Mary Sue’s for himself).

As is his habit, Miscavige used Keenan based on whim. Keenan was a Miscavige messenger boy. He accompanied him to the pub and on his “outings”. And he was also Miscavige’s “enforcer.”  Keenan was the one that carried out Miscavige’s orders to have me, Heber, Guillaume Lesevre, Greg Wilhere and Marc Yager thrown (clothed) into the St Hill lake (a rather chilly and dirty experience in November). He is also the one who, on instructions from Miscavige, took me into the hallway outside Miscavige’s Manor Office and punched me so hard I blacked out.

Keenan was supposed to be the person who dealt with John Sweeney and the BBC, though he somehow managed to avoid being interviewed on camera. For the most part he simply “reported” about what anyone else was doing “direct to COB.” He was Miscavige’s “trusted” eyes and ears, a spy for Dear Leader who monitored what others were doing.

Miscavige wanted Keenan to move to Int because he was “trusted”. Keenan contrived all sorts of excuses to avoid doing so, mostly on the basis that his wife was “not qualified.”  I believe Keenan saw the writing on the wall and knew if he went to Int he would not last long. Miscavige favorites ALL ended up in trouble. He had witnessed it himself. He was happy to deal with Miscavige once or maybe twice a year.

In 2006 Miscavige brought him to the Int Base, and along with Debbie Cook (another of the Miscavige “flavor of the month” pets at the time), they “inspected” the Hole and carried out Miscavige orders to throw all the detainees in the lake on the Int Base (this was one of Keenan’s specialties). Not too long thereafter of course, Debbie herself ended up in the Hole.

Keenan was an expert brown-noser. He was not without charm. He told good stories and had a colorful history. He claimed to have been a London fireman, a British Marine and trainer of competitive yacht crews — though I don’t know which of these stories are true. He NEVER disagreed with Miscavige. He made sure Miscavige had everything he could possibly want, the PPRO staff were used as servants for Miscavige while he was in residence at St Hill, and Keenan ensured the finest foods were available etc etc.

Keenan also had a darker side too. He envisaged himself as a master strategist/intelligence operative. He hired a number of “experts” that worked directly for him. These included former journalists and a guy named James Hunt who claimed to be an expert at surveillance, investigations and had “contacts” to help deal with unpleasant problems. Keenan maintained the lines to these people personally and paid them in cash. Keenan had developed a network of “supporters” who donated cash to the “cause”. He would literally ride off in the middle of the night on his Triumph motorcycle to collect bags of cash from these “supporters” that were then used to pay his “professionals.”

Marty Rathbun published a piece on Bob Keenan on his blog in 2010 — I have reprinted it below:

Miscavige started bypassing OSA on operations of a very sensitive nature several years ago. They were too incriminating and too illegal for OSA to be trusted with keeping them from winding Miscavige up in the news or jail. Keenan fancied himself a Cugine (a young ambitious gangster who will do anything to climb the ranks in the mafia). Keenan funded such operations by approaching former GO/OSA public (such as David Gaiman and Andy Hutton) for cash donations. Keenan would then give the cash to “media/invest professionals (MIPs)”(his operatives) so nothing about their dirty deeds would appear on church books. MIPs are generally alcoholic ex-Fleet Street tabloid reports who will do anything against a former colleague for a little drinking money. Keenan had a whole stable of them. 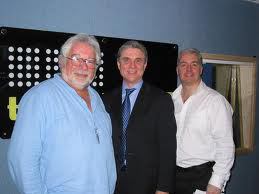 An MIP with Mike Rinder and Bob “Babbo” Keenan

In Autumn 2009 Keenan was summoned to the US by Miscavige and asssigned the task of taking me out, by any means necessary so as to squash the Independent movement. He set up a number of Wile E. Coyote operations many of which are still operating today, including the several juvenile anti-Marty web sites and blogs. All of his ops – backfiring as they inevitably do – have ultimately contributed to the forward progress of the Independent movement. Bob, who was once a cugine, is today merely a Babbo (a mafia underling who is considered to be useless).

The following is taken from a 2007 despatch from Miscavige in which he critiques a Bob Keenan proposed operation to “get Sweeney (John of BBC fame) busted.” The proposal was for a hired resource to befriend Sweeney so that he might set Sweeney up for some illegal activity that Sweeney would then be “gotten” for, fired by the BBC, discredited, and nullified as a threat.

MEDIA/INVEST PROFESSIONAL: Speaking of paying people, the only problem with this proposal is that if word leaks out on that, it sounds like we’re paying to “get Sweeney.” The budget isn’t the problem. Doing it on the product basis of “getting him busted” won’t look good if it comes out. You of all people should understand how this works. Solve it. Solve it while not losing the media professional.

Miscavige’s contribution to the plan to frame an internationally renowned journalist (a plan he ordered in the first place) was advice to adjust the wording so the word could not leak out that the church was paying someone for the product of “getting him (Sweeney) busted”, as that would backfire on the church.

In other words, Miscavige’s contribution is to encourage the illegal program, and to compound the felony with slick cover up.

Tommy Davis was right when he asserted to the St Petersburg Times that David Miscavige gives a whole new meaning to the term “religious leader.”

Keenan was the BMOC at St Hill because he had direct access to Dear Leader. He was with him virtually all the time when Miscavige was in England, and corresponded with him routinely when Miscavige was elsewhere. So everyone knew to be careful around “Mr. Keenan” as he could drop a dime on anyone at any time and they would suddenly be in disfavor and find themselves being investigated by the RTC Reps at St Hill.

But eventually his favored status soured. Just as it does with everyone who comes in contact with Miscavige.

Keenan refused to be “promoted” permanently to Int and then routed out of the Sea Org — supposedly due to a physical disability. The same “explanation” used to cover the departures of Debbie Cook, Tommy and Jessica and other high profile ex-SO members. He divorced his wife (Tatiana) once he no longer needed her to provide an excuse for avoiding being transferred to the Int base.

Keenan was set up with a do nothing job with a wealthy scientologist outside of Brighton named Mike Holland.

But today he no longer works for Holland and is reportedly working with another of his contacts from when he was PPRO UK, Andrew Skirrow.

It seems Keenan now wants to disassociate himself entirely from his scientology past, and has changed his name to “Rob Swan.”  Tommy Davis transformed himself into Thomas Davis. Keenan went a step further — he adjusted his first name and came up with an entirely NEW last name.

Robert Swan created a LinkedIn page — with a photo of Bob Keenan.  The photo has since been removed. I shouldn’t have been so slow to grab a screenshot!

Bob Keenan disappeared from LinkedIn and as a director of two companies, suddenly  to be replaced by “Rob Swan.”

There is no question that Bob Keenan morphed into Rob Swan.

Curiously on his LinkedIn page, Keenan/Swan claims the following (his other activities — ie Bright Green Eco Tech and a couple of other related things only extend back 2 or 3 years):

Huntermay – specialists in forensic due diligence investigations, Corporate negotiations, Crisis media management and other related corporate consultation. Huntermay works with a number of international government agencies and multinational organisations to help and train in the effective discovery, isolation and resolving of corporate and governmental contractual risk, litigation mitigation, due diligence, crisis management and asset recovery.

This is apparently James Hunt’s company.  The only web presence for “huntermay” is James Hunt on Twitter as “@huntermay” (https://twitter.com/huntermay), though it appears huntermay was dissolved and reformed as mayhunter, with James John Hunt involved in both companies as “Media Manager”. Though both of these companies are reported as “dissolved” in the UK at the end of 2011.

Either “Rob Swan” is telling a lie about his employment history and James Hunt is covering for him or perhaps Keenan WAS working for them during his time in the Sea Org and collecting some of the money he was picking up in paper bags around the UK? It is a strange thing to claim a directorship in an investigation company when he was the LRH Personal Public Relations Officer UK?

I wrote an article that mentioned James Hunt and his US operations in March of this year entitled Black Bag Operations.

This is all very strange. But here is what is not explained at all:

Bob Keenan was the most senior “PR” for scientology in the UK for many years. He was a trusted Miscavige lieutenant.

Why would he be going to such lengths to distance himself from his past? Why is he trying to hide?

He certainly isn’t speaking out about the abuses he witnessed or participated in, though it is rumored he is no longer in good standing with the church…

Perhaps some sleuths out there can come up with some further clues. This has been discussed in the past on other blogs.

Maybe Bob Keenan/Rob Swan would like to talk to me?