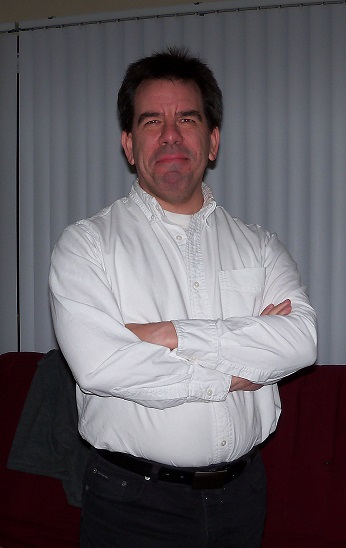 Chris Shelton, who has posted here as Galactic Patrol for some time, sent me this article for publication.

It provides an interesting perspective on being a staff member and being in the SO. It may not be everyone’s view, but it certainly aligns with much of what I experienced.

And I think it is a helpful addition to multiple viewpoints that are expressed here in an effort to make all data available to those who are interested.

I spent my entire adult life as a professional Scientology staff member. I started taking classes when I was 15 and joined staff at the age of 17. I joined the Sea Organization when I was 25 and stayed in until I was 43.

I trained as a Pro Course Supervisor and Word Clearer, Class 0 Auditor and Purification Rundown In-Charge. I also trained as a Data Series Evaluator and Org Manager, amongst many other things. I completed all of The Basics books and lectures after they were released in 2006, as well as the LRH Congresses and a panoply of other lectures and materials (including many issues that public may never see as they were “confidential Sea Org references” concerning management and administration). When it comes to Scientology and Sea Organization policy and tech, I can unequivocally state that I am an expert.

I achieved the state of Clear when I was an org staff member, but that got taken away when I was in the Sea Org. I was sent back down the line to ARC Straightwire and despite all the years I worked full-time on staff and in the Sea Org, if I were to go back now I would be at the very bottom of the Bridge, back at the Purif and Objectives.

I held numerous posts: as an org staff member, I was an Academy and Key to Life Supervisor and Tech Sec. When I went into the Sea Org, I supervised course and auditing delivery across the entire western United States. That lasted for eight years. After I couldn’t take that anymore, I was transferred to AOLA as a Registrar and then was again put into the Tech areas. I even worked briefly at Bridge Publications, making the Basics books. The last four years of my career were spent as a Sea Org missionaire, traveling from org to org recruiting for the Sea Org, recovering people to The Bridge and finally working full time on the Ideal Org campaigns.

My reasons for leaving the Sea Org, and then Scientology altogether, were not really any different from so many others who have recently come out and told their stories. The injustices, the obsession with making money for no exchange of any kind, the corruption at the highest levels of the Sea Organization, the gross and glaring alterations of the technology, the unworkable and untenable programs being forced down on Scientologists for the past 20+ years – all of this and much more.

I’m sorry to say that I contributed to some of this, and I’m not proud of any of it. There were times I treated staff very poorly and ignored their real need for help; I lied to people so they would join staff and the Sea Org and I certainly did my share of yelling during moments of stress. I tried my hardest throughout my Scientology career to be fair, honest and compassionate, and most of the time I succeeded. I’m proud to say that despite the insanity, I kept my cool enough to be well liked in every org I went to and at continental management. I had a reputation for being able to get things done, yet still “maintain ARC”, and I consistently had “upstats”.

Eventually I will get my entire story out. It covers 27 years of dedicated, nose-to-the-grindstone work and that’s a lot of territory. It would take an entire book to detail all of it and maybe someday I’ll write that book, but that is beyond the scope of this article. Instead of trying to summarize that any further, what I want to talk about here is why I stayed with it for so long and why I believe others do too.

It’s a question that is asked often: How do intelligent, rational people get involved in a cult-like environment, and once they see the abuses and outpoints, why do they stay?

Not only that, but I believed with every fiber of my being that we Scientologists were the only ones who were making that difference. This is a particularly important point when recruiting and why people stay. Once you believe that Scientology is the most important thing in the whole universe, it’s a very small leap in logic to conclude that nothing else really matters at all.

One goes in to Scientology, and especially onto staff and the Sea Organization, knowing that there are going to be sacrifices. You know that you are not going to have as much time off, or be free to sit around watching TV or movies. You know that while your room and board may be taken care of and you don’t have to worry about dental bills, the exchange for that is your loyalty and your perseverance to achieve Command Intention. You even swear to uphold, forward and carry out Command Intention as a Sea Org member. It becomes a point of personal pride and duty to do so.

There is, as well, the ethics of “the greatest good for the greatest number.” Unexamined critically, this concept appears to be a truly wonderful idea. If you help others, then you think that, of course, that help is going to be returned to you. If you bring spiritual freedom and eternal survival to others, then of course it will be revisited back upon you. One finds that this is not true at all. The “greatest good” depends on the eye of the beholder and whose “good” is being served. There are people who are more than happy to use the “greatest good” to work someone to the bone and make them feel guilty for not doing even more.

Once the outpoints become so great that a person can’t ignore them, there is still a decision that has to be made about what to do. It was very easy for me to forgive; someone yells or screams or even hits, well, everyone is under a lot of stress and there are intense targets to meet and we’re all on the same team. Right? Win or die in the attempt, isn’t that what we all agreed to?

Plus, after giving years of oneself to a cause, a true esprit is established with your team mates. Even if you don’t like all of them personally, even if you wouldn’t want to sit down and eat with them, they are your brothers-in-arms. To consider leaving them behind would be to court disaster. Who’s going to carry the torch if you fall down or drop it?

Finally, who wants to think that all of those years have been for naught? I didn’t want to just give up, not if there was even a possibility, no matter how slim, that our goals could be achieved and we could “clear the planet.” After all that time and all that work, it would be a complete fail to just walk away. No, better to persist and carry on and keep fighting the fight. Our programs may not have been perfect but they were better than nothing!

Despite all of these reasons, once I started to see the almost insatiable fixation that the IAS regges and upper management seemed to have with regging straight donations, it became clear to me that something was really wrong. Long trusted and well-respected Int Management personnel disappeared from Int events and soon we never heard anything from them at all – it became all Miscavige’s show. The Ideal Orgs were empty despite all the promises of “getting in policy” and “booming like never before.” I saw the stats, the empty course rooms, and the idle auditors. The Ideal Orgs were not expanding after they were opened, and despite all the rhetoric coming from the top, making auditors was something we hadn’t done in any real volume since the early 1990s. It was no longer the Scientology I had joined and it was not the Scientology described in tech and policy.

The final breaking point for me was when I realized that I had spent my life working to make other people happy, and yet I myself was not happy. My marriage had disintegrated after I had spent almost four straight years away from my wife on projects and missions. I had made no Bridge progress as a Sea Org member. And I wasn’t the only one. In all my years, I had seen many Sea Org members grow old and even die in the Sea Org, barely up through a few Grades or maybe Clear. It grated on me that this was allowed to happen.

I was spending all of my time being a martyr for the cause, and it hit me one day that I could spend the rest of my life doing that and no one was going to do anything about it. No one was ever going to stop sending me out on missions. No one was going to take me aside and say, “Hey, Chris, you’ve salvaged hundreds, maybe thousands of people, and you know what? Now it’s your turn. Let’s get you up The Bridge.” It’s all well and good to talk about clearing the planet and salvaging everyone in this sector, but wouldn’t that start with the very people who are supposed to be doing the salvaging? When do they get to partake in all this goodness? When does someone see to it that their needs are fulfilled and they are actually happy? If I had stayed, I’m quite sure I’d still be waiting for answers to those questions.

Now that I’m out of that life and have had time to decompress and get free of the pressure-cooker mentality, my life has changed enormously for the better. The freedom and happiness that Scientologists seek actually does exist. It exists out here in the real world, not inside the RCS bubble. I have experienced more self-determinism, more honesty and integrity and more personal certainty in the past few months since I stepped out of the bubble than in all the previous years combined.

My life is my own. I am happy. I have reconnected with and made real friends who don’t care about me because of my stats, or my product record or because of how much money I can raise. They just like me for who I am. And those are real friends.

Thank you to everyone who has helped me since I left the RCS behind. The adjustment has been intense and there have been major losses due to the evil RCS disconnection policies, people I called friends for over 20 years. I have lost loved ones I would have died for, but honestly, it was worth it to be free of the RCS forever.

I want that freedom now for everyone still in, so you’ll continue to hear from me and see me around, at least for a little while longer. I hope that if you are reading this and you are still in, that you will join me out here. It really is great.