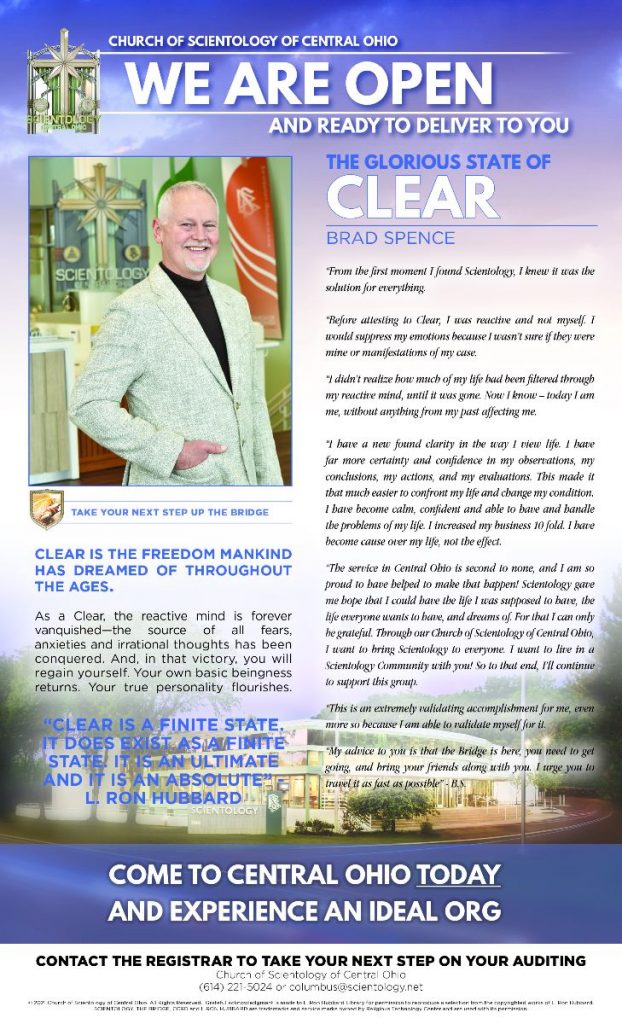 Brad Spence certainly seems to have had some wins from achieving the state of Clear. But his success story is weak sauce compared to what is promised ny Hubbard concerning the State of Clear. He claims he is now “me” and has found “clarity” in the way he lives life and is more certain in his observations, conclusions and reactions. All very subjective achievements. I could claim those same things from doing meditation or reading a book or just because I woke up an$ the sun was shining and the birds chirping.

Nice things all, but who is ever going to know what they reall6 mean or if they ar3 true.

Hubbard on the other hand was not vague in the promises he made:

“A Clear, for instance, has complete recall of everything which ever happened to him, or anything he ever studied. He does mental computations, such as those in chess, for example, which a normal would do in half an hour, in ten or fifteen seconds.”

“[The reactive mind] can give a man arthritis, bursitis, asthma, allergies, sinusitis, coronary trouble, high blood pressure … And it is the only thing in the human being which can produce these effects … Discharge the content of [the reactive mind] and the arthritis vanishes, myopia gets better, heart illness decreases, asthma disappears, stomachs function properly and the whole catalog of ills goes away and stays away.”

Those are just two paragraphs of MANY that lay out the abilities of a Clear.

But when nobody could attain clear he came up with a new one: “Cleared Theta Clear,” which he describes this way in Scientology 8-8008:

These things ARE what Hubbard promised. And STILL promises. These passages have not been modified or asterisked in the current editions of the books.

And when these things didn’t come to pass, he came up with the Clearing Course that is Solo Audited.

But that was only temporary too — OT III was soon offered and then he proclaimed all Clears were “in Danger” if they didn’t forthwith and at once get to OT III. So much for the State of Clear.

Of course, OT III turned out to be just a stepping stone for the other OT levels. Even OT IIIX where you did just it all over again.

And the promises of the OT levels (at the time) would be fully realized with the New Era Dianetics for OT’s (“living lightning”)… until that then morphed into Solo NOTs — many more years of same old same old.

Then the glory of OT VIII, the cure for Whole Track amnesia. Except everyone had to come back and do it again — “New OT VIII”. Someone forgot something on the level? Why didn’t Clears already have perfect memory like he said?

Now of course, the full promise of Ron from Dianetics will be realized on the OT IX and X. People have been “getting ready” for these miraculous new levels for 30 or more years now. In fact, since Ron “discarded his body” to “continue his research” in 1986. Or perhaps since the first “OT VIII’s” rolled off the Freewinds in 1988. But finally the road of new solutions to make the old promises come true has reached a dead end…

Sadly, scientology is a series of promises made and promises broken.

But somehow, the sheeple keep going. Hoping the next level will deliver on what is promised. And it never does. And it never will.