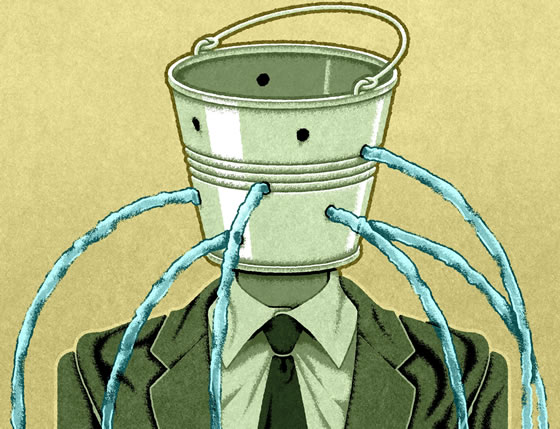 The leak plugging efforts just don’t seem to be working.  They even have a full time person in OSA Flag assigned to get to the bottom of this situation. But the OTC Minutes just keep rolling in. And though they have taken out a lot of embarrassing statistical specifics, they still have what should be embarrassing details (I think most of these people are oblivious to how ridiculous they are). Part of the problem is that they can turn ANYTHING into good news and “huge impact” so they THINK they are relaying good news. The delusion is a sight to behold. They remind me of the proverbial fleas climbing up the elephant’s leg with rape on their minds.

Let’s begin with the mighty powerhouses at Flag. The biggest and baddest OT Committee in this sector of the universe. 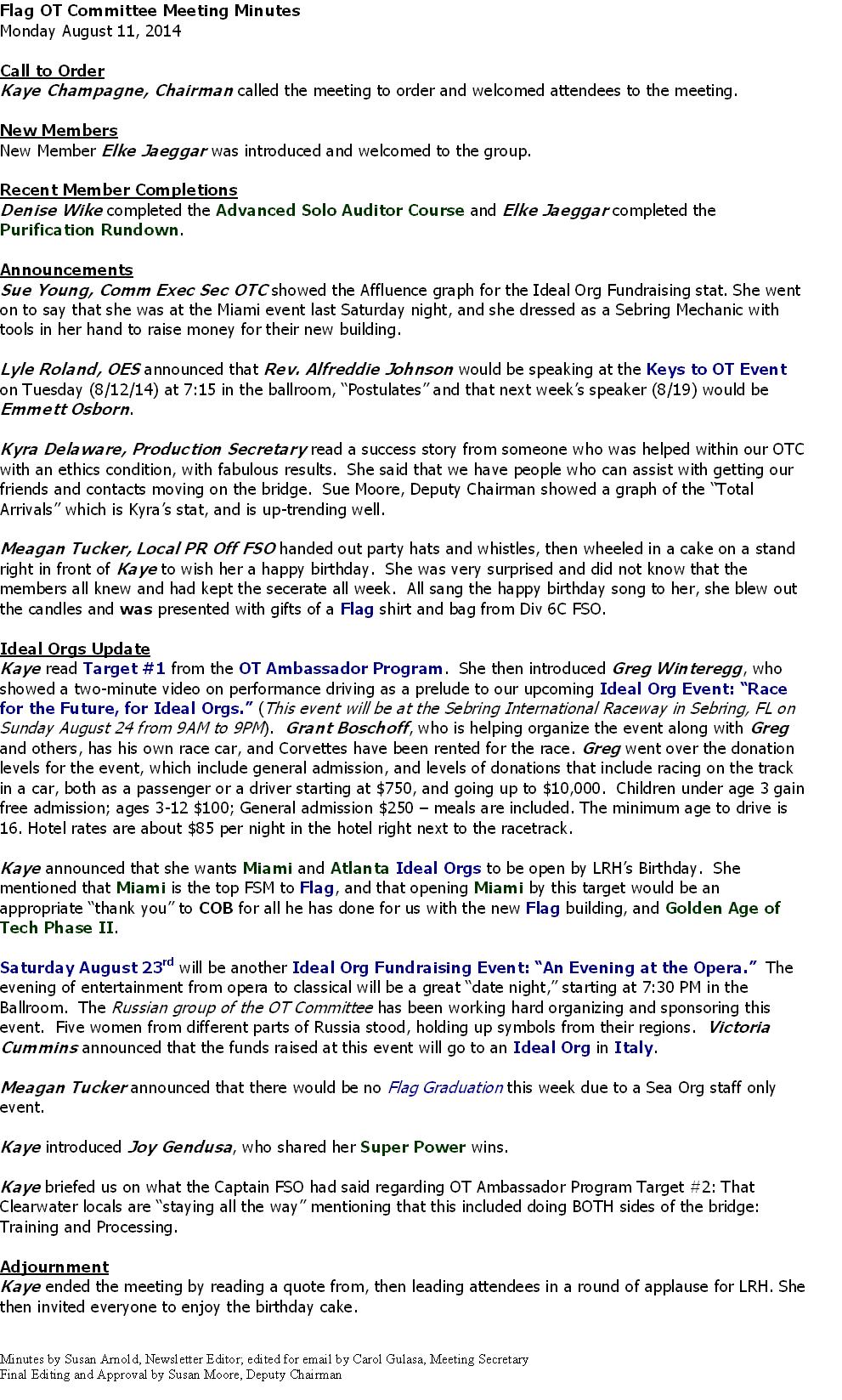 Two completions is pretty impressive, including a Purif for the OTs. Remember when they had the “game” of 100% of the OTC on service and they were touting that virtually everyone was on service? Hmmm, doesn’t quite add up to two completions. But then again, there has been no mention of that game for some time, so as with everything else in scientology, when the pressure eases off things revert to their usual dead state. Oh, and one person was helped with an ethics condition. Woohoo.

Kaye “wants” Miami and Atlanta to be opened by LRH’s birthday as an appropriate gift to COB. There isn’t a chance of this happening, but she seems a bit confused about the identities of LRH and COB.  This is increasingly the case as Miscavige has been running scientology for longer than LRH at this point.

Now, from the “other” local Tampa OT Committee and here again, OT wonderwoman Kaye Champagne made an appearance to support the troops, she is flitting about to Atlanta and Miami and Tampa  (though they don’t seem able to spell either of her names correctly). By the way, I wonder why Orlando never gets a mention? It’s only an hour away and is the CLOSEST Org that is not ideal. Where is the Flag OT Committee coming to the rescue of Orlando?  It gets about as much attention as those orgs in France which are NEVER mentioned anywhere (except in the press).

A few points of note:

This is the “Model Ideal St Hill Size Class V Org” — the best of the best. The big daddy of ideal orgs clearing the planet.  In 6 months they have made 17 Clears.  That is LESS THAN ONE A WEEK.  They are responsible for a metropolitan area of 4.3 MILLION people. At one per month (which is more than what they are doing) it will take 4.3 million months or THREE HUNDRED SIXTY THOUSAND YEARS TO CLEAR TAMPA.  And their tag to this stat is: But even more, what this means to planetary clearing – The impact is HUGE!!

And then, this perfect, SH size ideal org needs to get their Central Files up to date? Now how can that be?  They are ideal? AND SH size? AND a model for everyone else? And this is “so 10,000 recoveries can be back on course!”  They have had 10,000 blows from courses in Tampa?

Just for a little humor, an imported Sea Org member is going to speak on “What is Love?” with all proceeds going to Miami Org. I expect this will be an absolutely riveting talk with some deep insights into how to raise and love your family. Could be as entertaining as Hitler giving a talk on holding a good seder.

Tampa OT Committee Meeting Minutes                                 5 August 2014Jill welcomed us all to Tampa OT Committee meeting. And welcome back to Daniel Corrado and to Aja Anderson!! Also a warm welcome to guest Jim Thompson, who lives in Tampa!! New Postings:Please intoduce new members to Lynette Barry Dir I & R – she can be reached at (813) 335 – 4422. This will be the best way to get them on the email lines and grooved in. Book Selling:Friday Night ALIVE! starts around 7 pm at the Org- go out into lively Ybor City Saturday Night ALIVE! 7pm at the Org–again, go out into Ybor. Women’s Show coming in October. A great venue GAT II:Come to the potluck next Tuesday and hear WINS and interesting stories of GAT II!! Early start at 6:15. Theme is Italian foods. We will also have tech terminals from the Org brief us on the progress made in this area.IAS:Daniel reported on the event in Washington DC to fundraise for the LRH Hall. Though this is technically not IAS, the report about the continuation of creating the Flag Mecca was inspiring. 4D Compaigns:Natalie Mannechia and Ami Amolgy distributed 200 TWTH door-to-door this Sunday. Way to go, you two! Keep it up, and we need some more to go out on Sunday morning.Saturday Aug 9 is East Tampa’s Back – to – School Bash where volunteers hand out TWTH booklets to every child. You can help. Marlin Anderson has the details: marlin@tampabay.rr.com. Oct 7 is National Night Out where we will have a TWTH table. The Tampa Chief-of-Police and possibly the Mayor will show up for this one. Jan 19 2015–Joyce Anderson’s convertible is registered to be in the MLK parade with 50 kids from Washburn Academy marching behind!! There will be a TWTH banner and volunteers distributing booklets to the crowd. And beads! Yes, this is a long way away, but you have to register now and be invited to participate, and Marlin got ‘er done! VM:Friday night will be a VM tent in Ocala – to flow POWER to Ocala. Sunday VM booth at Big Top Flea Market. Miracle WINS happen every week! Has been a great bookselling event. Upcoming events:This Sunday August 10, 11 am is the Field Briefing at Flag Auditorium. There will be hundreds of people and brunch. The Captain will speak on the most important issues including getting more people on service. There will be a reserved table up front for Tampa. Confirm with Debbie Phelps at 805-245-2669. Text is fine.WISE meeting with Rich Byrd and his group., 6 pm at the Org, every Wed.   LRH data discussed and cogs about how to implement! Stay for…..Next Wednesday August 13, 7 pm, Mike Fine will give a lecture on “What is Love?” Cost is $10 and proceeds go to Ideal Orgs. Pay with cash, check, or credit card. 25 confirms already!! OTC is SOOOOO behind this. Bring all your friends. Birthday Game:Tampa Org #6 weekly and #8 cumulative with Highest-ever: student points, SRD co-audit hours and SRD students!!! Ended with LRH quote.Then……..Deb, Lorraine, Louise and Marlin and..(did I miss anyone?) stayed and labeled some TWTH booklets because we have given all the others out! Thanks, guys. Minutes submitted by Deborah Otto.

Wow, that Jim Thompson really gets around… He is almost as popular as Kaye Champagne though it seems they can spell his name right.

And in the “IAS” category was a report about “the fundraise” for the “LRH Hall.”  I have to get around to this one of these days as the boondoggle of the “LRH Hall” is really something.  The usual gang of thieves are at it full bore — Charmaine, Bruce and Laurie. They have taken to conducting tours of LRH properties to try and raise money. Miscavige must rue the day he was forced to open the SP Building — income has plummeted as they HAD to stop fundraising, and the vast majority of people had already pre-paid for Sooper Power and the Running Program so it’s not generating any real new income. And if there is one thing that gets his knickers in a twist, it is less money coming in (not because he needs the money, in his mind it reflects lessened support for him).