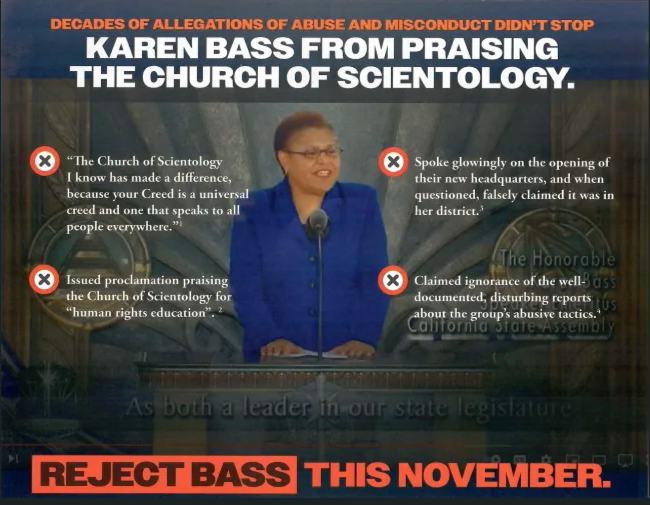 Scientology has become a key issue in the LA Mayoral race between Karen Bass and Rick Caruso. Of course, scientology is freaking out as their “good name” (haha) is being used to smear opponents.

It stems from Karen Bass’ ill-advised participation in a 2010 ribbon cutting ceremony for the “new” LA Org building (the building was not new of course, just refurbished).

This came up two years ago when Rep. Bass was touted as a possible VP candidate to join the Biden ticket.

I have some relevant information on this matter, both from my time in scientology and subsequent to this becoming an issue in 2020.

First, scientology has always made a massive effort to get politicians to attend their events. It is a way of gaining credibility. I talk about getting the President of the California State Senate to attend the ribbon cutting of the L. Ron Hubbard Life Exhibition in my book, A Billion Years, and what a feather in my cap this was considered to be. You probably recall various Mayors and other dignitaries being persuaded to participate in these “ribbon cuttings” over the years. Some have been prominent; Rep Charlie Rangel participated in the ribbon cutting of the NY Org building. The Mayors of Buffalo, Sacramento and San Francisco all attended scientology building “openings.” The approach is usually made to these people through a scientologist who is a wealthy contributor to their campaigns or one of scientology’s hired lobbyists or political operatives. They are briefed about the anti-drug, education, human rights and morality programs scientology touts. Who could argue with those things? (That they don’t really exist is not made clear… the videos look impressive). These people are provided talking points they can cover and many of their speeches were actually written by people in the Office of Special Affairs for them (I also talk about this in my book with Charlie Rangel). They show up, are treated like VIP’s, deliver their speeches and go on to their next appointment. They SHOULD do more research about what they are endorsing. Nowadays, they can hardly persuade anyone to show up, even the lowliest, fringe “dignitaries” are not willing to show their faces at any sort of scientology events.

Of course, Rep. Bass should have known better in 2010. There had been plenty of negative coverage of scientology by then.  But, she was not alone in her failure to screen her appearance. And it’s easy to look back 12 years ago and think that the world understood scientology like it does today, which was not the case. The groundbreaking Going Clear on HBO in 2015 changed the game.  The Aftermath series then raised awareness even further, every week over 3 years new horror stories were exposed and the public came to understand that scientology was not just “misunderstood” or the victims of a “bad rap” in the media, but were engaged in serious, ongoing abuses.

Today, there are plenty of officials who got suckered by scientology into attending their events or providing cookie-cutter endorsements who wish they had never heard the word.

When the 2010 ribbon cutting incident blew up in 2020, Rep. Bass reached out to Leah and me to ask us about scientology. We answered her questions and she watched episodes of The Aftermath. She wanted to know the truth and made the effort and took the time to get herself educated. She asked us how she could help put an end to the abuses she now understood were ongoing in scientology. We suggested some things she could assist with and she readily agreed. Since then she has continued to push through on those actions, even when the media noise had died down. She has lived up to her word. I am not going to detail what it is she has done behind the scenes, because it could potentially derail those actions.

I don’t know much about the positions of either candidate, and don’t tend to discuss politics at all on my blog as it is a subject that usually ends up in flame wars.

But I do have something to offer concerning this matter of scientology.

I have never spoken to Rick Caruso. He may be a great Mayor for Los Angeles.

I have spoken to Karen Bass. I know she now knows the truth about scientology, and took the time to be sure she didn’t repeat her earlier mistakes. There are those who this will never satisfy. I believe people can change, see the light and move forward to create a new future.

I know that of the two candidates, the one scientology would hate to have as the next Mayor of LA is Karen Bass. Rick Caruso has used scientology as a way of smearing Karen Bass, but he has done nothing I know of to curtail their abuses. Karen Bass, I know from personal experience, has. And I know that she will never be tricked by scientology again.

In the scientology stronghold of Los Angeles, a leader who understands their tactics and is aware of their abuses and is willing to do something about it is the best reason I can think of to elect her as Mayor.