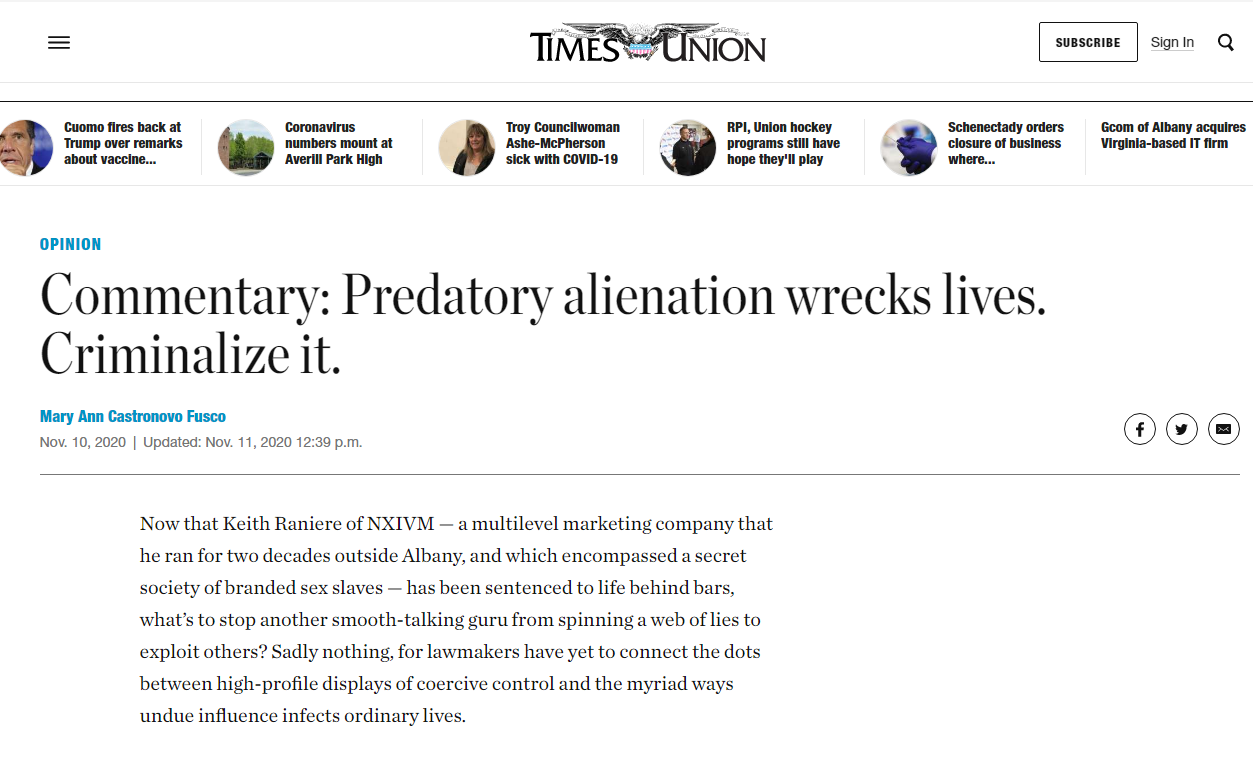 This is an excellent article in the Albany Times Union, prompted by the recent sentencing of Keith Raniere.

I saw this and Tweeted it out, but it deserves more attention.

Mary Ann hones in on the exact problem that looms like a massive roadblock in the path of justice for victims of coercive and high demand groups. And this definitely includes scientology.

The hardest thing to demonstrate is mental/emotional abuse. There is no cauterized brand left on the victim’s body. No canceled checks or credit card debt trail. It would make it far less onerous for victims to be heard in court if legislatures would enact protections against mental and emotional torture that clearly delineated the wrongdoing. That is not an easy task, but with the help of professionals who have experience with this sort of thing, it could certainly be done. Apparently New Jersey has taken the first steps on this (ironically, despite the “massive international expansion proven by the numerous new churches opening everywhere” that scientology  lairs, after 70 years there isn’t a single scientology church in the state of New Jersey).

Of course, in the case of scientology and other religions, even with predatory alienation laws enacted, they would still try to hide behind the cloak of the First Amendment.

Scientology would claim that that forced disconnection — the very definition of predatory alienation — is a religious practice.  There is a second article below this one on that topic…

First, here is what Mary Ann has to say:

Now that Keith Raniere of NXIVM — a multilevel marketing company that he ran for two decades outside Albany, and which encompassed a secret society of branded sex slaves — has been sentenced to life behind bars, what’s to stop another smooth-talking guru from spinning a web of lies to exploit others? Sadly nothing, for lawmakers have yet to connect the dots between high-profile displays of coercive control and the myriad ways undue influence infects ordinary lives.

On November 18, 1978, Jim Jones of the People’s Temple incited more than 900 members of his Guyana jungle colony to commit “revolutionary suicide” with a cyanide-laced fruit drink after the murder of Congressman Leo Ryan of California and three others—the largest single loss of American civilian life in a deliberate act until September 11, 2001. A third of the victims were children. Books and docudramas recounted the gory details, but no policies against the malicious manipulation at the root of that tragedy were enacted.

In the decades between the Jonestown massacre and the NXIVM case, countless families have been emotionally eviscerated by the loss of loved ones to other coercive individuals and high-demand groups that managed to stay out of the headlines. Having no legal recourse, these bereft indirect victims often spend thousands on various advisers in hope of reconnecting, with no guarantee of success. Only if a prosecutable crime is committed will law enforcement step in, sometimes after irreparable harm has been done.

Laws skimming this area are piecemeal. In June, the California Senate unanimously passed a bill to include coercive control and isolation from friends, relatives, or other sources of support in its definition of domestic abuse. In 2014, California adopted a new definition for undue influence incorporating how elders can be manipulated by “excessive persuasion.” But as the NXIVM case shows, the targets of such unconscionable behavior can be of any age, anywhere.

Just as a thief can hack into a computer, a human trafficker, gang leader, abusive partner, con artist, or other predator can hack into a person’s mind—distorting memories into falsehoods and convincing them to cut off family and friends, rendering the isolated person dependent on the perpetrator. Key to maintaining control over the decisions and actions of another, such predatory alienation should be illegal.

A 2017 New Jersey law defined predatory alienation and ordered a study of its effect on young adults and senior citizens, conducted by the Rutgers University School of Social Work. Bills now before both houses of the New Jersey Legislature call for the Predatory Alienation and Consensual Response Act to implement some of the study recommendations, but do not criminalize the destructive behavior.

Those who seem to have abandoned all reason to give up everything they have and everyone they know—and even to submit to servitude in an equatorial jungle or to branding in an upstate suburb—can’t know they’ve been unduly influenced until they get away from their coercive handler. Yet once a son or daughter reaches the age of legal majority, parents lose all rights to rescue them from the psychological bondage imposed by the Keith Ranieres of the world, even if they have evidence of a pattern of deceptive control with no informed consent.

Meanwhile, victims of predatory alienation who say they’re “estranged” from their family typically don’t have to prove it to obtain subsidized housing or college financing.

Such gaming of the social services system can render care providers unwitting accessories to predatory behavior.

Now that the gavel has come down on Keith Raniere, will lawmakers connect the dots among all manifestations of coercive control? Will they finally stop expecting those who get caught in the net of undue influence to extricate themselves, and start holding accountable those who cast it?

And here is another story from The Independent that highlights the extent that religions shelter their abusive practices using the First Amendment. 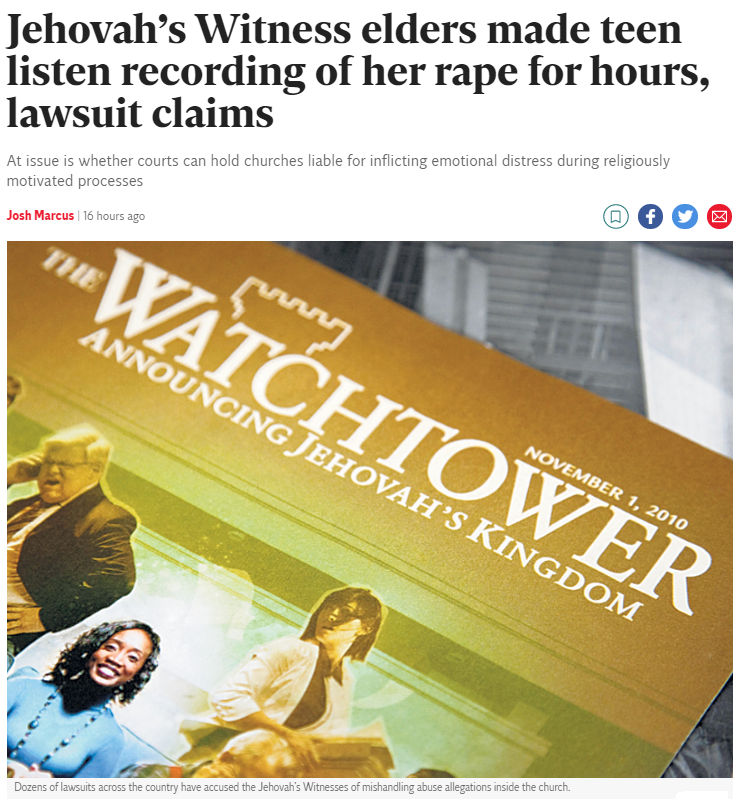 Elders at a Utah congregation of Jehovah’s Witnesses allegedly forced a 15-year-old to listen to a recording of her rape over and over again for hours as part of a religious inquiry, a lawsuit before the Utah Supreme Court claims.

The case seeks to hold the leaders and the church at large responsible for inflicting emotional distress.

The church claims, and lower courts have ruled, that to hold them liable would violate the religious freedoms of the First Amendment of the US Constitution, since it involves weighing the appropriateness of religious conduct.

In duelling briefs, as well as oral arguments for the case on Monday (recordings of which are not yet available), the two sides wrestled over the meaning of this bedrock of American civil rights law.

Karra Porter, a lawyer representing the church, argued there was a difference between the government regulating physical harm and that of the facts in the case, according to the Desert News.

But at least one justice seems not see it that way.

“The allegation here is a mental and emotional equivalent of waterboarding,” Justice Deno Himonas said. “I’ve been a judge for a long time and a lawyer for a long time. I’ve never seen, in court, anything like this that’s alleged.”

The lawyers on the other side have previously argued that neglecting to challenge the church’s alleged actions here would set a precedent that “would give actors free rein to injure others under the guise of religious freedom—a proposition that the US Supreme Court has rejected repeatedly for over a century.”

Lawyers representing the church and the alleged victim did not immediately respond to a request for comment.

The suit, originally filed in 2016, argued that the leaders of a congregation in Roy, Utah, made the teen girl sit and listen to the recordings for hours in 2008 as part of a religious inquiry. The woman in question, now an adult in her 20s, said in court documents a fellow Jehovah’s Witness, age 18, bullied her and allegedly raped her three times, including one instance in which the man involved recorded the incident.

This triggered an investigation from the church in early 2008, where the leaders called the girl and her parents into a committee which would decide whether she had engaged in sinful conduct. During the meeting, they played the recording on and off “for hours” in an attempt to extract a confession, according to court documents, as the girl “continued crying and was ‘physically quivering’ from the trauma of having to listen to her assault over and over.”

This led, her lawyers say, to anxiety, nightmares, loss of appetite, and poor performance in school, leading her to seek damages from the church.

But two lower courts found that the church couldn’t be held liable.

As the Utah Court of Appeals held in 2019, doing would require “an inquiry into the appropriateness of the Church’s conduct in applying a religious practice and therefore violates the Establishment Clause of the First Amendment,” which bars the government from instituting particular religious practices.

Dozens of suits nationwide have accused the Jehovah’s Witnesses of mismanaging or covering up abuse inside the church, including one in early 2020, when the Montana Supreme Court reversed a $35 million judgement against the church for not reporting a girl’s abuse to authorities.

I have mentioned this in various places before. It is my view that the justice system in the US heavily favors those who have the most money. And with the system based on precedents (“case law”) the protections of the First Amendment have, over many decades, tilted in favor of organized religions to the detriment of the individual who practices the religion. The big churches have the money to hire the best lawyers and fight cases to the higher courts whenever they disagree with a decision against them. The landscape of law that has been created regarding religious institutions today gives them a virtual carte blanche to act any way they want in violation of individual’s rights unless they violate criminal law.

As outrageous as the circumstances of the Utah case above may be, I suspect the JW’s will prevail in the end.  That is a sad state of affairs. We see a similar thing happening with scientology enforcing their Kangaroo Court Committee of Evidence on plaintiffs who have been abused, and courts upholding their right to continue to abuse on the basis that this is a matter of religious policy.

Churches also have considerable political influence. The Religious Right in this country is a heavyweight presence on the political landscape. Mainstream churches want to protect the status quo, and view negative decisions against Jehovah’s Witnesses or scientology or other fringe groups as the first slip down a dangerous slope that may end up holding them accountable too. So they fight the “erosion of religious choice” hard. Again, that’s good for the churches, bad for the individual.

The way to solve this is to attack on a number of fronts:

It’s a long row to hoe. But the abuse must end and there is no easy way to do it.