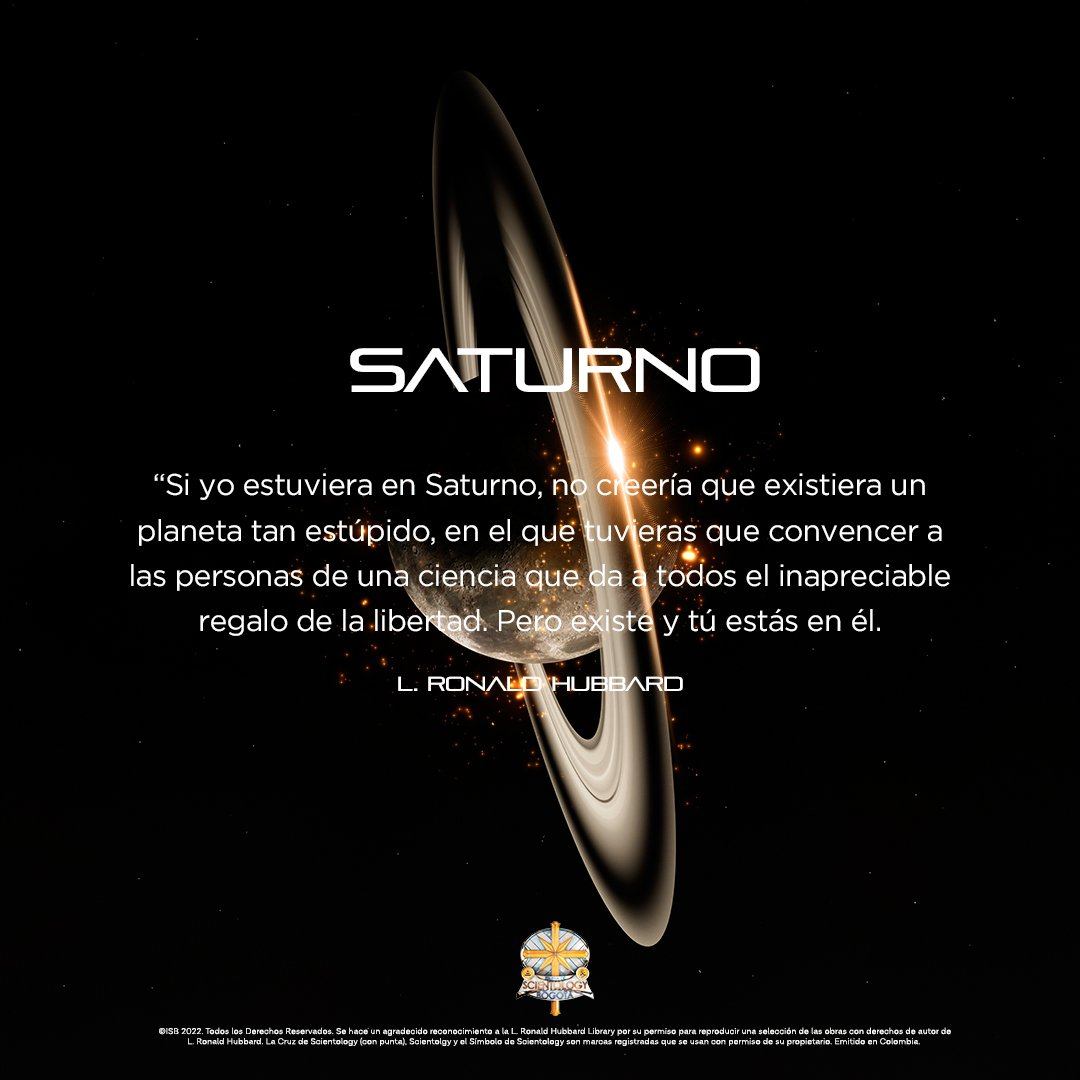 “If I were on Saturn, I wouldn’t believe such a stupid planet existed, where you had to convince people of a science that gives everyone the priceless gift of freedom. But it exists and you are in it.”

One of our readers sent this promo item to me, and was curious about where this quote came from.

It’s a Hubbard doozie — everyone on this planet is stupid because they don’t recognize his “science” which gives the “priceless gift of freedom.”

Of course, the use of science is one of his favorites to convince people that his “technology” is not simply made up, but scientifically researched and tested. Of course, it never was and still cannot be tested. And as for the priceless “gift” of freedom, it’s kind of hard to classify something you must pay for as a gift.

I did find the reference it was lifted from — a Professional Auditor’s Bulletin from 1955 titled SELLING.

There are some rather amazing statements in this PAB.

Of course, Hubbard claims the reason people don’t just buy into his amazing technology is the fault of the psychiatrists and medical doctors.

And here are a few more of his big lies — all gathered here in this one issue:

Scientology, a brand-new science, has been handling things that couldn’t be handled in the past.

Scientology applied the exact methods of science to the problem of the human mind and spirit, and won. It means the study of knowingness. Its immediate result in application is the bettering of ability in individuals and groups. It is a practical religion for all denominations and doesn’t require faith in anybody

It has more validated cases in its files than any other practice.

It is not an authoritarian science and is of and for the people; it belongs to the little man and woman, not to huge interests.

Scientology caps about ten thousand years of study that began in Asia and wound up with a quarter of a century of work in the Western Hemisphere.

And he ends with a cheery — “Good selling.”

Despite his claims that people are unwilling to accept that anything can be done and so won’t accept dianetics and scientology, IF IT DELIVERED THE RESULTS PROMISED, there would be no need to sell it at all. You could not stop people from joining the ranks of auditors and pc’s.

Here is the full text of the PAB.

It is completely fantastic that we have to sell Dianetics and Scientology. Yet we do.

The world does not know that there is any hope for the mind, the spirit, the intelligence level, weariness and disability. If you talk to a group all about the mechanics of the spirit and fail to talk to them about “There is some hope for it,” you’ve overshot, and right there you have “entered the public case” too high. Its data level does NOT include SOMETHING CAN BE DONE ABOUT IT.

The careless driver, the faithless wife, the negligent employee are all severe problems. You could confront an individual beset by such problems and talk for half an hour about engrams and have him walk away without asking for help. Why? Because his entrance level is SOMETHING CAN BE DONE ABOUT IT. You’ll have to sell him on that before you can sell him anything else. Does it take selling? It surely does!

The world has been promised and promised and promised for centuries, with a flop every time. Today the magazines of the cheaper variety are full of psychiatric articles about the miracles of new drugs. Even legislation states that psychiatry “cures seventy-five percent of its cases”; an outright lie. The public knows this is a lie. It knows that as soon as you promise cures that you’re lying. Even the Busy Business Bureaus state that the public should suspect anyone who promises a cure for anything-by which, we believe, it includes psychiatry. So your glowing statements that you can take care of it entirely are received by the beset person not at all. He’s heard it before. He’s spent his money on patent medicine, and medicos, and quack psychologists, or he knows somebody who has, and he knows it won’t work, that there IS NO HOPE.

How do we solve this impasse? We don’t overpromise our beset person. We tell him that we have known such things to be helped by Scientology; that if we were persuaded, we might take a crack at it; that the thing isn’t ENTIRELY hopeless, since Scientology, a brand-new science, has been handling things that couldn’t be handled in the past. And we go on in this vein, a sort of two-way comm, until we bring his tone up to where he thinks maybe there IS something that can be done about it if he is very lucky and if we, fortunately, will make an effort. Show him the Code of a Scientologist. But talk to him not about WHAT you can do or HOW you can do it, but that there IS some hope in the matter these days.

Another point is to declassify Scientology as medicine, psychology, psychoanalysis or psychiatry. Classification with these will doom your point. Your beset person, or the group you are addressing, possesses experience along THESE lines. Punch this up everywhere: SCIENTOLOGY IS THE ONLY ANGLOSAXON developed science of the mind and spirit. Medicine is Latin in origin. Psychology is German (Prof. Wundt, 1862). Psychoanalysis is Austrian (Freud, 1894). Psychiatry is Russian (Pavlov and others in the 1890s). Scientology is an Anglo-Saxon exact science of the mind and spirit.

Another point is the goal of Scientology: Ability.

Now, in talking to a group, steer off from para-Scientology. Layoff the whole track stuff, huh? Layoff the fantastic. And if you have some chap around who insists on telling people about these things, just note him down; he isn’t working for us, fellers. The quickest way to lose a beset person or a group is to load him down with phenomena. Talk instead about the fact that something can be done. Talk about the fact that there is a spiritual side to man. Talk about the fact that Scientology solves social problems. When they are very initiate and it’s all in good fun and they’ve also got their HPA or HCA, do what you like with the whole track. Or use it in private sessions. Don’t hand it out to the public raw. It’s too strong.

To establish two-way communication (as you MUST do if you are going to communicate at all) you have to talk within the UNDERSTANDING of your audience. Remember that UNDERSTANDING is the peak of ARC. And ARC includes COMMUNICATION. Communication brings about understanding, so communicate a lot. But some understanding must exist to bring about communication, so don’t tell the Ladies’ Aid Society about your whole track space opera and expect them to begin cheering your speech. If their mouths open at all it will be either to say “Huh?” or to snore. And they won’t come back again. This is so
much a fact that I want you to write and tell me who and where anytime you hear somebody spout off about whole track to new audiences or to strangers, for by this we find the boys who aren’t in our camp.

Our world today, before we’re well into it, believes that you live one life and get buried, and that’s that; that you don’t go to heaven; that mechanical gimmicks work better than men; that religion was “pie in the sky” and nobody got to eat it; that SCIENCE may or may not be beneficial; that you can’t really do anything about it anyway. That’s a pretty dim and inaccurate view, but that’s the view, just the same.

When raising the tone of the pc, do it gently by small gradients. The rises can get spectacular, but not if you try it with rocket ships. And when you do it, you’ll do it by raising his UNDERSTANDING, but if you fail it was because you jumped ABOVE his understanding and so you became unreal.

Now, the first step in auditing is not a process as such. It’s FIND A PRECLEAR. and the next step is ESTABLISH THE EXISTENCE OF AN AUDITOR. That’s why you don’t do quite so well with Mama. You haven’t established the existence of an auditor. To find a preclear, you have to engage what little understanding you are confronting, and then raise it.

Asking a preclear to decide to have processing is silly. You wouldn’t ask him to run Part C of SOP 8-C first, would you? No. You tell him, within his framework of understanding, that auditing is necessary to accomplish his goal and when to report. You don’t ask an audience to decide to like Scientology or Dianetics. You tell them to like it, to trust it, to learn to hope again with it. You aren’t a scientist, and you don’t have to be wishy-washy and indefinite about what you say. Be simple. Be decisive. Be theta.

To find a pc, you have only to establish the fact that there is hope in auditing and the existence of the auditor.

You don’t have to struggle to tell people what Scientology is, what it is all about. Scientology applied the exact methods of science to the problem of the human mind and spirit, and won. It means the study of knowingness. Its immediate result in application is the bettering of ability in individuals and groups. It is a practical religion for all denominations and doesn’t require faith in anybody until they have experienced something to have faith about. It helps people who want to be helped and if they don’t want to be helped it doesn’t insist on helping them. It can be used to train and control people. Its goal is freedom. It has more
validated cases in its files than any other practice. It is not an authoritarian science and is of and for the people; it belongs to the little man and woman, not to huge interests. By using Scientology you can talk better to people, and understand people better, and get things done or keep things from getting done. Scientology caps about ten thousand years of study that began in Asia and wound up with a quarter of a century of work in the Western Hemisphere. Its practitioners are ministers. These are trained for years, in school and out. These ministers abide by a Code that couldn’t be applied to the healing sciences at all by reason of its clauses. If people want to know a lot about Scientology, they’ll have to start from scratch like you did. You do things, you don’t just talk about them. When and if somebody starts running you and Scientology down, get amused, get superior, don’t close terminals. Scientology is like “good roads and good weather.” Everybody is for those. Somebody trying to run it down would be out for bad roads and bad weather, and you appeal to that few who like things done right and running right. And so you become amused at opposition. You don’t demonstrate Scientology on somebody before an audience just to PROVE IT WORKS. You handle this problem by insisting, if you process at all, upon processing the entire group, and you use “three points in the body, find three points in the room, find three points in the body,” until somebody pops out. Then you smile and hand them your card and wonder who is running at Epsom Downs next week. Talking or processing, you are in poised control of the subject and your person or audience.

I wouldn’t credit, if I were on Saturn and somebody told me you had to sell a science which gives the priceless gift of freedom to everyone, that such a stupid planet could exist. But it does, and you are on it.