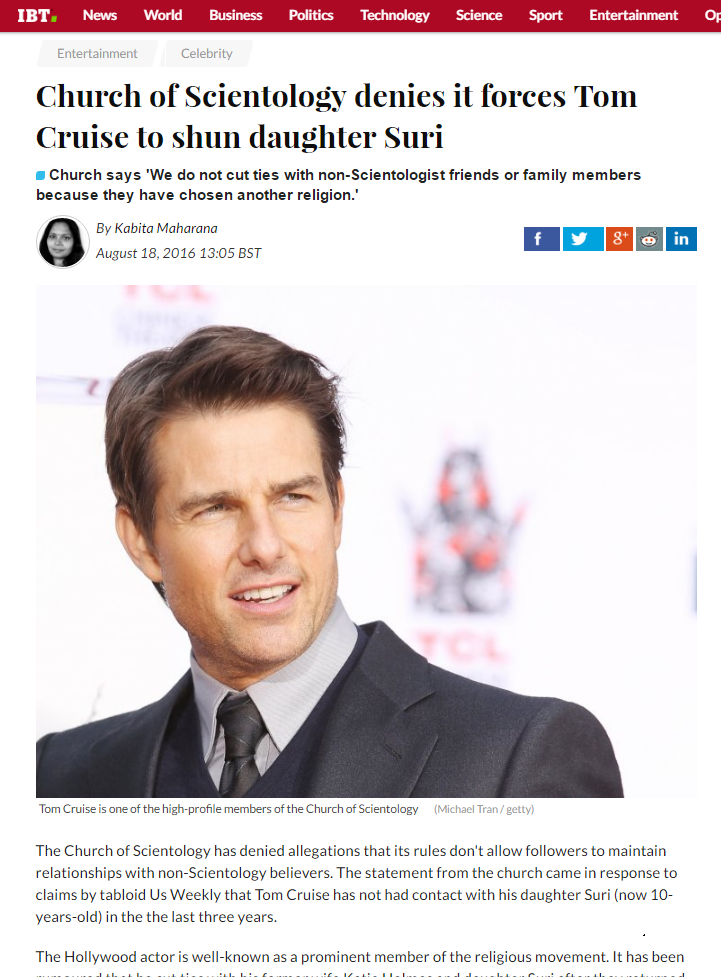 Somewhat buried under the coverage of the demise of Gawker and its greatest hits including publishing the infamous 2004 Freedom Medal of Valor video of Mr. Cruise making an ass of himself,, comes this from the International Business Times (and apparently Us Magazine, though I haven’t bothered to check that).

It’s a strange position to be in for scientology. They deny it’s “not them” keeping Tom away from Suri. Yet, if they are to be taken at at their word, they are throwing Mr. Cruise (they don’t want him referred to any other way — just like Mr. Miscavige and NOT Captain Miscavige) under the bus. He has apparently not denied the repeated stories that he does not see Suri. That would be the obvious thing to do if it not true. He used to file lawsuits over things like this and Bert Fields letters flew to the media outlets. So, the only explanation left is that he doesn’t care about his daughter enough to visit with her?  Wow. Good going there footbullet kings….

Here is the statement scientology is reported to have made, defending itself and trashing Mr. Cruise:

The Church of Scientology denied the allegations, telling Us Weekly: “We never comment on individual parishioners’ lives. On the issue of Church religious practices, we do not know who your anonymous sources are, but they got it all wrong. The answer to your question is no.

“Scientologists respect the faith of others, associate with and befriend members of every religion. Scientologists do not cut ties with non-Scientologist friends or family members because they have chosen another religion.

This is, as is typical, an interesting and very misleading statement.  They parse words like Bill Clinton denying his relationship with Monica Lewinsky.

Let’s start at the beginning:

We never comment on individual parishioners’ lives. Unless of course we have decided they are “SP’s” and we can apply Fair Game to them. Technically, they are no longer “parishioners”, so this is “true.” But all the information we then disclose about them is from when they WERE “parishioners.” They get all sorts of personal information from their parishioners and generally do hold it — until they no longer deem them suitable to be protected by the “priest penitent privilege.”

Scientologists respect the faith of others, associate with and befriend members of every religion. Unless those beliefs are not compatible with scientology. They do not respect the beliefs of ex-scientologists. Or atheists (look up “Godless psychiatrists” in the writings of Hubbard — it appears over and over as the most dismissive condemnation possible). It is technically true there is no proscription against any other faith — they make this a big deal for public relations purposes.  Except as one advances in scientology and is indoctrinated into Keeping Scientology Working and then more advanced scientology writings about Jesus Christ being an implant, you discover that every other religion is NOT compatible with scientology and to be a scientologists you CANNOT practice any other religion, or even yoga or anything else. Anything NOT scientology, whether another religion or self-help scheme is categorized by the derogatory term “Other Practices” and at the lower levels is severely frowned upon and discouraged and at the higher levels is specifically forbidden.

Miscavige thinks he is very clever with these carefully parsed statements sent to the press. He thinks nobody will notice and many media will blithely publish them without comment. And he is correct in some regard. But the truth is that everyone knowledgeable about scientology who sees this knows it is a lie. And that includes existing scientologists.  When Tommy Davis infamously went on CNN and outright lied about disconnection and lied directly to Paul Haggis, it was the straw that broke the camel’s back. And that led to the New Yorker article by Lawrence Wright (“The Apostate” a wonderful piece if you have never read it) and subsequently to Larry Wright’s book Going Clear which was then the basis for Alex Gibney’s HBO masterpiece of the same name.

You would think he would learn….

But fortunately, humility does not permeate the world of a sociopath.  In their mind they cannot ever do anything wrong.  So they will never learn from their mistakes and will simply keep repeating the same disasters over and over until finally they are no more.