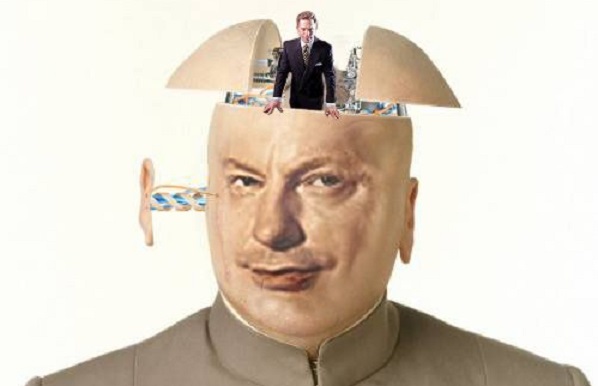 We don’t know when, but it is going to be “released” at some point….

All those Briefing Course lectures are being gone through with a fine tooth comb to find everything that was ever said wrong by LRH and to add super new indexes using state-of-the-art golden age of indexing tech.

Chairman of the Board Religious Technology Center and Ecclesiastical Leader of the Scientology(r) religion, Mr. David Miscavige is working day and night to go through and listen to every tape himself and personally create the index because he cannot trust anyone else to ensure this course is “100% standard tech” — not even L. Ron Hubbard.

None of the Briefing Course Graduates who have come before were REALLY “Dukes of the Auditor Elite” — they were all phonies. They could NOT be real Class 6es when there was so much wrong with the course that it had to be withdrawn from circulation after nearly 50 years.

But then again, maybe it’s NEVER going to happen. After all, Miscavige has been talking about OT IX and XX for more than 20 years. Nothing. Same with the “OEC” (not been available for at least 10 years now). Same with “Tech Vols” also no longer available. And Miscavige has nattered about the L’s for 20 years — that they are “totally out tech and squirrel” but he can’t “find the time” to “fix them” and of course, nobody else has the clean hands, IQ and selflessness needed to do the job.

Once David Miscavige finally gets what L. Ron Hubbard did “on source” he will have ushered in a truly golden age of David Miscavige, where he has assumed the full mantle of D/Founder for Foundation Hours and true successor of Hubbard in every respect. His word will be the word of God to all fundamentalist scientologists, and He will be revered by the remaining faithful as the new L. Ron Hubbard leading them to salvation and true spiritual freedom.

And why not? He has run scientology for longer than Hubbard and has persuaded his followers that he has also done so more successfully. They almost believe he is Source, but would still be taken aback if he overtly said so. But it’s where he is heading and if he pulls off redoing the BC, the OEC, the Tech Vols and the L’s and everyone accepts it, that will be precisely what he HAS accomplished. All “tech” will be “thanks to Miscavige.”

You have to admire his chutzpah. 25 years ago there was not a scientologist on planet earth who would have bought into the idea that anyone could EVER take the place of L. Ron Hubbard. And Miscavige is almost there.

Here is the latest email being sent out to everyone they can think of to “create excitement” about redoing the Briefing Course.

Get ready! It will no doubt be released with some other expensive products — a new set of properly edited BC lectures on original reel-to-reel magnetic tapes perhaps (to capture the true spirit of the lectures) and almost certainly the long awaited (he announced these at a Maiden Voyage about 15 years ago, including SHOWING the “pages” and “sample definitions”) Technical and Admin dictionaries at $250 each or a set for $600 and a newly “packaged” set of basic books. And if you think this is satire, remember this post and we will see how far off the mark it is if the “new” BC ever sees the light of day.

Fill out the survey below and let us know!

We’re tallying up to see who is ready for the Saint Hill Briefing Course or who is planning to do it when it is released. While we don’t have a release date as of yet, we are preparing to have 500 people ready to start it at ASHO immediately after it is released. We want to know if you are ready.

1.  Since the Golden Age of Tech Phase II release, what steps have you completed on the training side of the Bridge?

2.  Are you currently on Golden Age of Tech II Training? If so, what org are you training in?

3. What is your processing level?

4. Are you interested in doing the Briefing course at ASHO when it is released?

5. Do you have any questions regarding Golden Age of Tech II Training?

6. Do you need further information on ASHO’s Scholarship program?