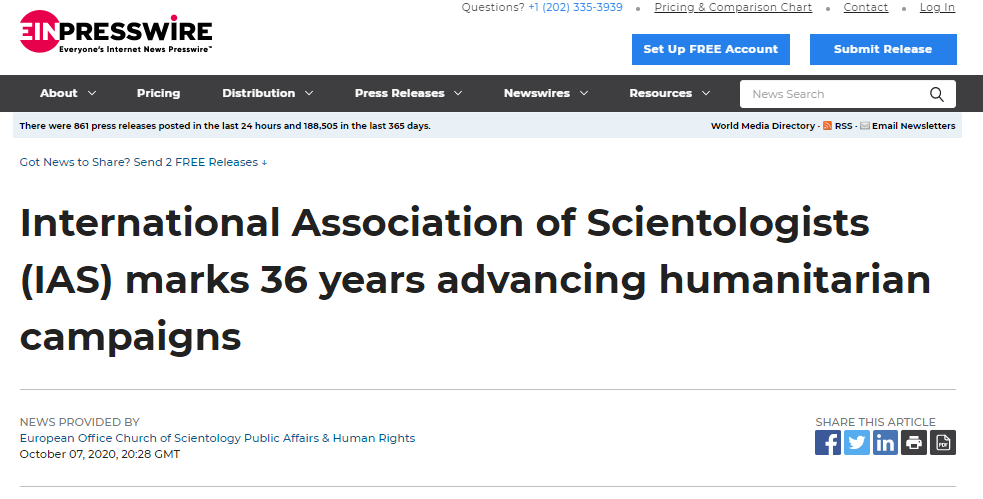 This year’s IAS event is going to be “virtual.” It’s a fundraising catastrophe for scientology as this is their biggest single event for raking in cash.

Undaunted, they put out a “press release” on a paid news service. Of course it gets no pickup in the media at all, as it contains no news. But you can find it online.

Below is the full release, 100% hype and bs. The back-patting “quotes” are from themselves. And their big accomplishment is apparently that some agency in Spain includes the IAS event as a scientology holiday in their “educational calendar.” Wow, that is an astonishing feat! Scientology so badly craves ANY sort of “recognition” that they take any mundane action by “wogs” and turn it into something worthy of a standing ovation. It’s comically pathetic.

BRUSSELS/MADRID, BELGIUM/SPAIN, October 7, 2020 /EINPresswire.com/ — October 7th, 2020. IAS members will virtually gather during this month to learn about the achievements of the last 365 days on the name of humanitarian drives, and to work on the planning “much still needed efforts” to help bring the world back to “improved normality” says the European representative of Scientology. The Spanish government’s foundation Pluralismo y Convivencia includes the anniversary as a holiday of the Church of Scientology, on the educational calendar in Spain amongst those of other religions.

According to Ivan Arjona, the representative of the Church of Scientology at the European institutions and the UN “This last year has seen the strength of what members of the IAS can do in a combined and coordinated effort to contribute tackling a worldwide disaster. Scientologists have been taking care of the most immediate needs of those helping citizens heal. They took the time to provide sensible information so that at least 5 million families, if not more, would have the needed knowledge to keep themselves and others well” and “This would have not been possible without the support of all members of the IAS”.

The Fundacion Pluralismo y Convivencia (Pluralism and Coexistence Foundation) of the Spanish government under the Ministry of Presidency, recently published a video listing all religious holidays for the month of October. As it is now tradition, it also includes the Anniversary of the International Association of Scientologists, which its members

“We are proud of the relationship we have with many civil society organizations and government agencies as it allows us to help in these times of need, and so it is comforting to see nations recognize not only our good intentions but our actions” said Arjona when asked about the fact that October 7 is officially recognized for example in Spain as a religious holiday.

The Foundation Pluralismo y Convivencia according to its website “is a public sector institution within the Ministry of the Presidency of Spain. Its mission is to anchor the recognition and acceptance of religious diversity as basic elements of peaceful coexistence, dialogue, and thus the complete guarantee of religious freedom in Spain”. It supports the implementation of religious and denominational projects. It also collaborates with the representative bodies of the religious denominations in order to guarantee for their members the unrestricted practice of their religion under the protection of religious freedom.

In its social and educational work, the focus is on raising awareness and tolerance of religious plurality; it is a cooperation with society as a whole, for the promotion and better understanding of religious diversity and thus contributes to the development of an informed public opinion.

On their part, the IAS is often making grants to fund public information campaigns aimed at addressing key societal ills, including according to their website “The world’s largest nongovernmental anti-drug initiative, reaching tens of millions annually. The world’s largest nongovernmental human rights campaign, broadly promoting the 30 Articles of the Universal Declaration of Human Rights. Global literacy programs helping tens of millions of underprivileged students in America, Europe, Asia, and Africa. The Scientology Volunteer Minister program bringing emergency relief to more than 10 million people at every major disaster site throughout the last decade”.

IAS grants have funded new Church facilities in Harlem, Inglewood, California, Johannesburg, New York, Madrid, Hamburg, London, Rome, Washington, DC, Brussels, and elsewhere. The IAS, the official membership organization of Scientology, open to all Scientologists from every nation, was formed in 1984. The purpose of the IAS is to unite, advance, support, and protect the Scientology religion and Scientologists in all parts of the world so as to achieve the Aims of Scientology as originated by L. Ron Hubbard (founder of Scientology): “A civilization without insanity, without criminals and without war, where the able can prosper and honest beings can have rights, and where Man is free to rise to greater heights.”

Press Office
European Office of the Church of Scientology