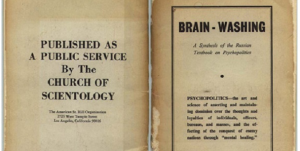 My old friend Janis Grady sent this to me and I found it quite amazing. These are some quotes taken from the booklet entitled Brainwashing. L. Ron Hubbard had this distributed by scientology in the 50's. He wrote it, but published it under the name of Lavrentiy Beria, Stalin's infamous head of the secret police. Hubbard never officially acknowledged he had written it, though it was reported by early scientologist John Sanborn that he witnessed Hubbard doing so. But what is undisputed is that Hubbard pushed the booklet (commonly called the Brainwashing Manual) through the HASI. Also undisputed … END_OF_DOCUMENT_TOKEN_TO_BE_REPLACED

I love that @LeahRemini shows the credits a decent amount of time before the ending to make sure they’re all seen - and they are!! Love y’all for speaking out and helping others @MikeRinder ♥️♥️♥️♥️