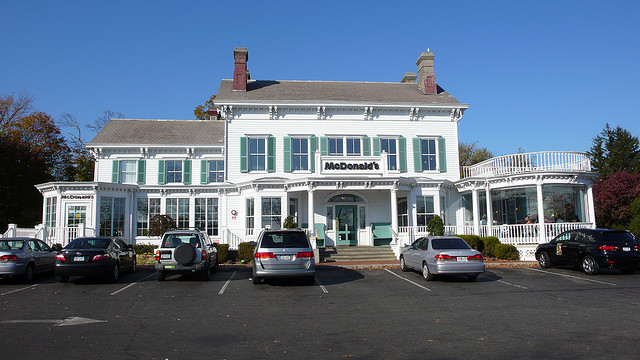 The last posting (David Miscavige’s Office At Gold) about Building 50 was one of the more popular in recent times.

There were 3 other photos on that website not included in that post.  They are good material for a follow up, along with some other photos sent in by our Special Correspondents. 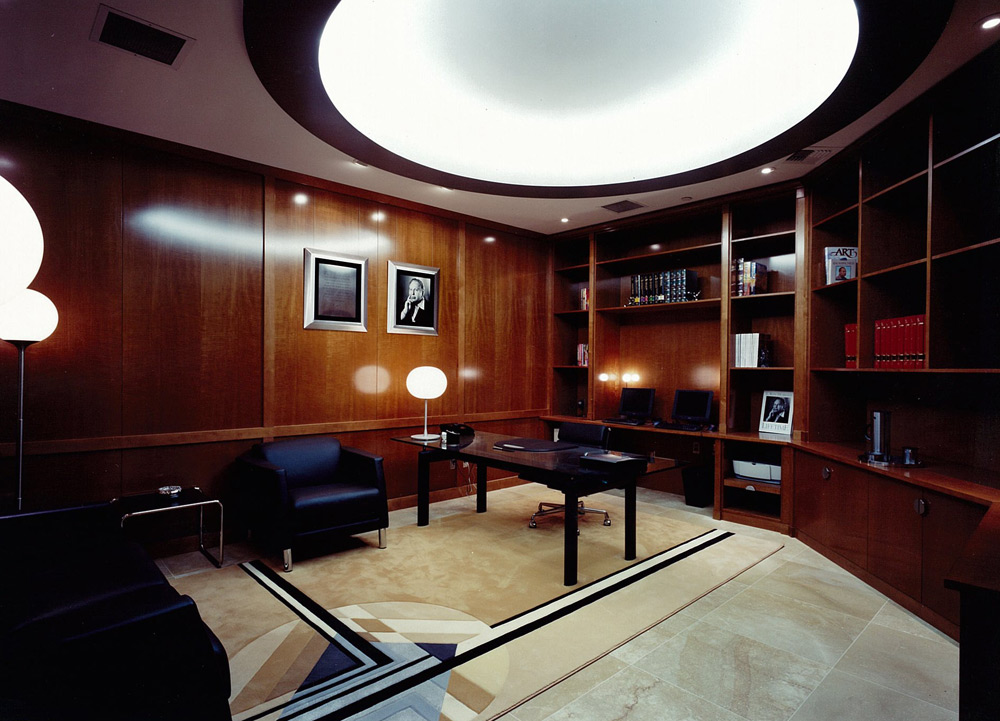 This is the “COB PR” office.

If any post in the Sea Org is completely untenable, this would be it. Miscavige brought Cathy DeSimone/Fraser/Hawkins from the IAS at the ship to hold this post. She didn’t last long and ended up as Port Captain Gold. She married Jeff Hawkins but then divorced him when he became an overnight SP. Other than her I don’t think anyone has ever occupied the position. And certainly nobody ever volunteered for it.

The only other people to ever use this office to my knowledge were Janet Light/McGlaughlin when she was the President IAS and was brought to Int as “the golden child” of Miscavige. She was one of the rotating “shooting stars” that arrived (usually from off the base) with great fanfare about how wonderful they were, and then promptly became “SP’s” like everyone else. This included a pretty long list of the “luminaries” of Scientology — Janet, Angie Blankenship, Russ Bellin and Tom Vorm, Kurt Weiland and Rita Schwarzgruber, Debbie Cook, Bob Keenan, Tom DeVocht, Jenny Linson, Barbara Ruiz and probably more I have forgotten.  Janet eventually became disaffected with Miscavige, ended up in the Hole and ultimately out of the SO.  Angie Blankenship may have been in there at one time when she was flavor of the month before she too ended up in the Hole and out of the SO. Same with Bob Keenan, also now out of the SO.

You can see this is part of the “COB Wing” because it has the overkill lighting, the same limestone flooring as the hallway (though without the stainless steel inlays) and a custom made hand tufted wool rug. 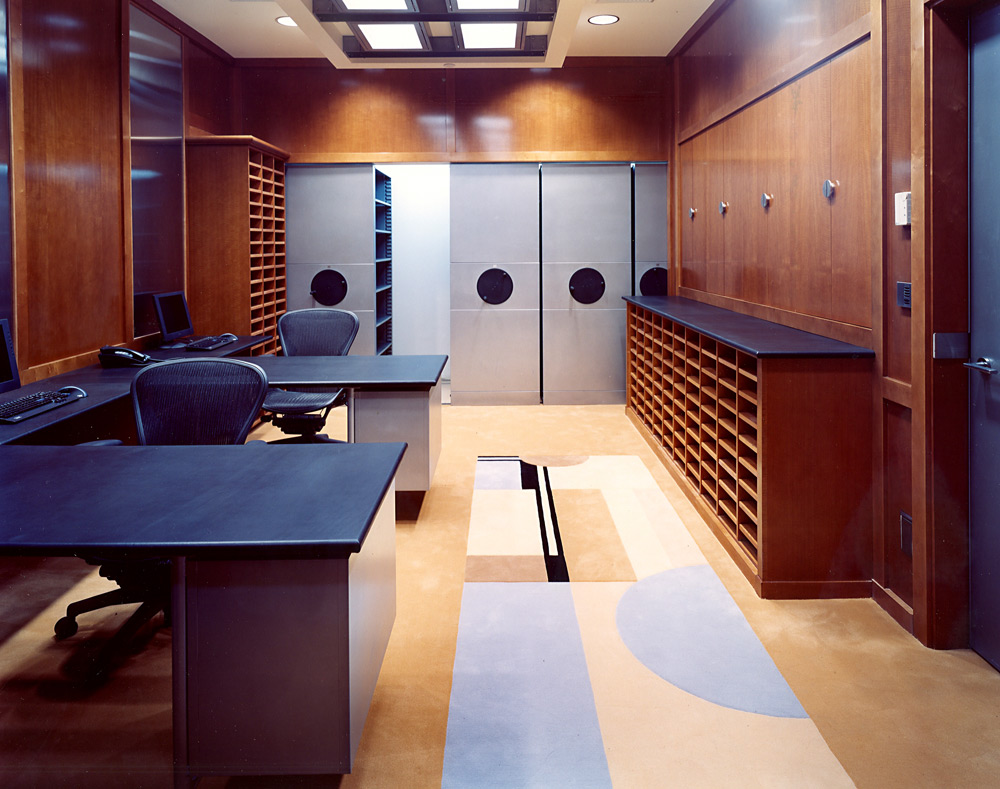 This is the “COB Compliance Office.”  It is in ADDITION to the other office for typists/transcriptionists.

It was specifically designed for tracking Miscavige’s streams of orders and chasing up compliance to them. The high density files in the back are to hold copies of all the orders he issues and the “compliance reports” that come back in.  Funny that there is a whole office devoted to COB Orders and Compliance Reports when Warren McShane and Allen Cartwright testified under oath in the Monique Rathbun case that they are completely unaware of “COB Orders” or “Compliance Reports”.  Anyone who has been at Int or Gold or other areas where he hangs out (like Flag) can tell you numerous stories of receiving “COB Orders” and being literally hounded by Tori Viau (COB Comm for Compliance) or other RTC or CMO people to “report compliance TO cob”.  This is often the reason people in the Sea Org do not sleep — they are required to “comply to COB” within an arbitrary timeframe (a “TM” in SO parlance) and if they do not comply in time they may not go to sleep until they finish and “get their submission up.”

This is the mad, mad world of the Sea Org.

One small note of interest, the Typists office which looked very similar to this, was the most used office in the whole building.  The custom wool carpet had to be replaced with darker colors due to the wear and tear. The Landlord Office designed it and Maggie Truax got it made and installed. 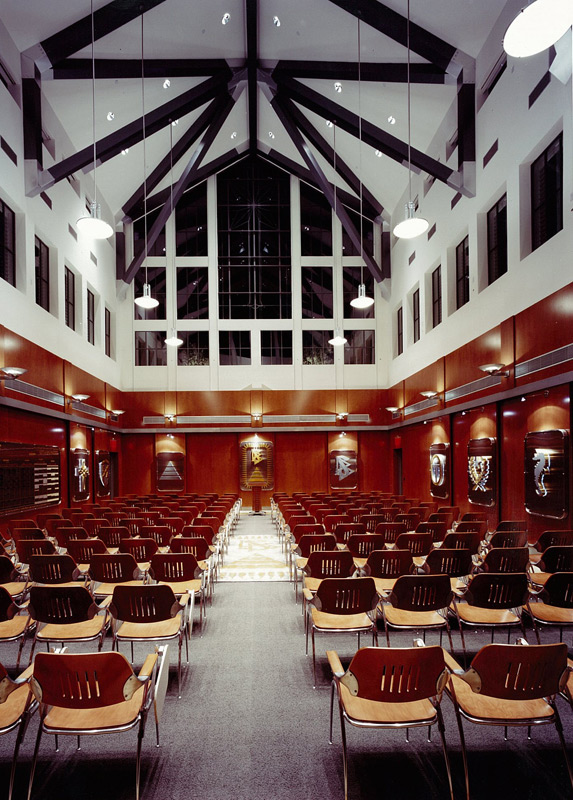 This is “The Courtyard” (atrium) in the center of the building.

Most of the time it had a LONG table down the center and Miscavige would sit on one side with Shelly, Lou and assorted recordists and typists and the peons were on the other side (whoever he was lecturing at the time). Many times there would be a row of 15 people sitting on the other side of the table and perhaps 30 more behind them while the King and his retinue lorded over everyone from the other side. Sometimes these meetings/lectures/diatribes would go on for HOURS, in fact, all day and then everyone would have to STAY IN THE ROOM “figuring out why they were SPs” while Dear Leader went off to sleep (telling everyone he was going to “handle his traffic”) and then would come back and start over again.

Literally hundreds of hours were spent in this place with Shelly Miscavige in her last act before being disappeared. A large organizing chart and the list of names of every person on the base, along with their files were pored over to “post the org board.” Much has been written about this “evolution” — this is where it took place.

Usually the Courtyard also had boxes of “submissions to COB” arrayed around the walls and stacked up. This was so Miscavige could show how overworked he was and how “he had to handle everything.” Would not have been a problem if he had not insisted on having every single proposal for everything sent to him. Literally everything of any moment at all — from promo pieces and courses to legal pleadings and video edits, from speeches and press releases to music mixes and space planning.

So, this Courtyard is a ‘special’ place for many Int Base Staff.

The floor of the atrium is the same limestone, and a huge rug with the RTC symbol was made to go on top. The symbols on the walls (with internal back lighting and front lighting) represent the different organizations and entities of Dave’s empire. As a note, there are roughly 50 more of these large symbols throughout the building, which some Gold staff spent about a year making. Then the org boards changed and the plan of who will occupy the building changed several times and most of the symbols had to be remade.

The windows on the upper right are where COB’s wing is located, and from there you can look down onto the courtyard. The large window at the back looks onto the COB wing patio (see further down).

The ceiling height of the atrium is 48 feet.  The huge black beams with steel fasteners are all faux props. They are hollow and don’t hold up anything.

Now for some new shots not on the website: 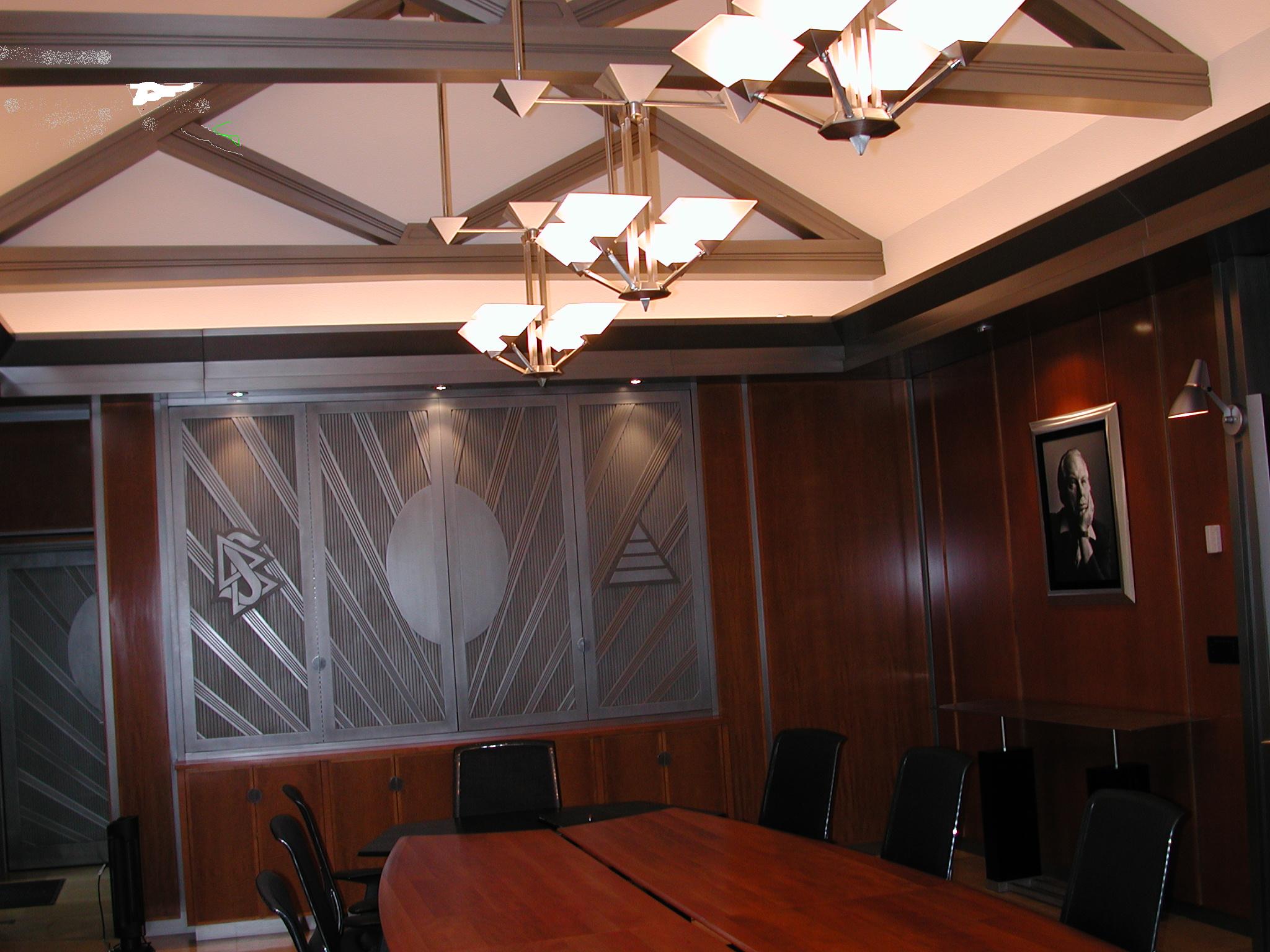 This is the “COB Conference Room.”  It is yet another part of “His wing”. The ornate doors you see were done by Gold staff, a team worked exclusively on COB projects.

Again, faux beams on the ceiling and over-the-top lighting. 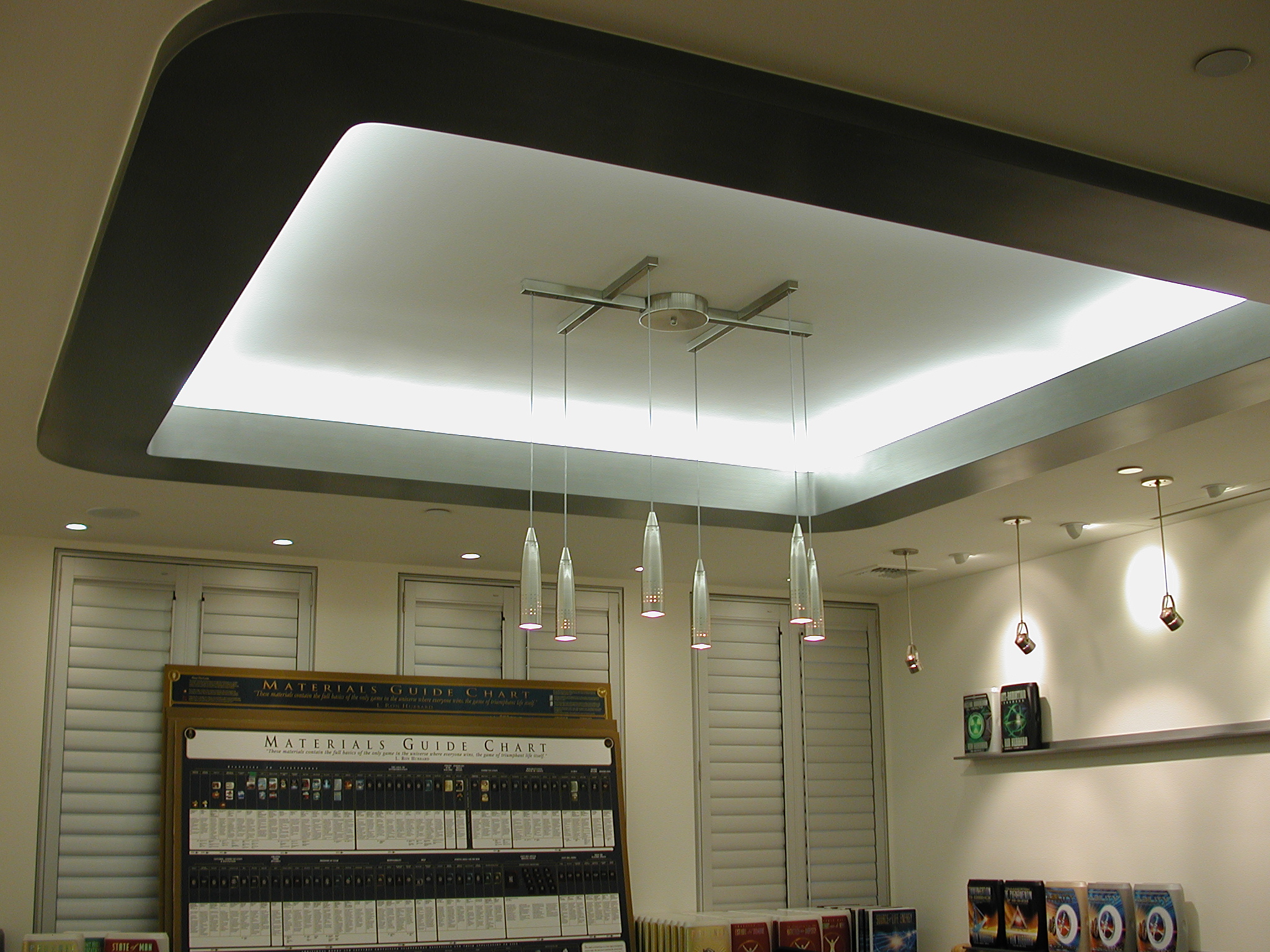 This is the “COB Project Room.”  Another part of the “COB Wing.” 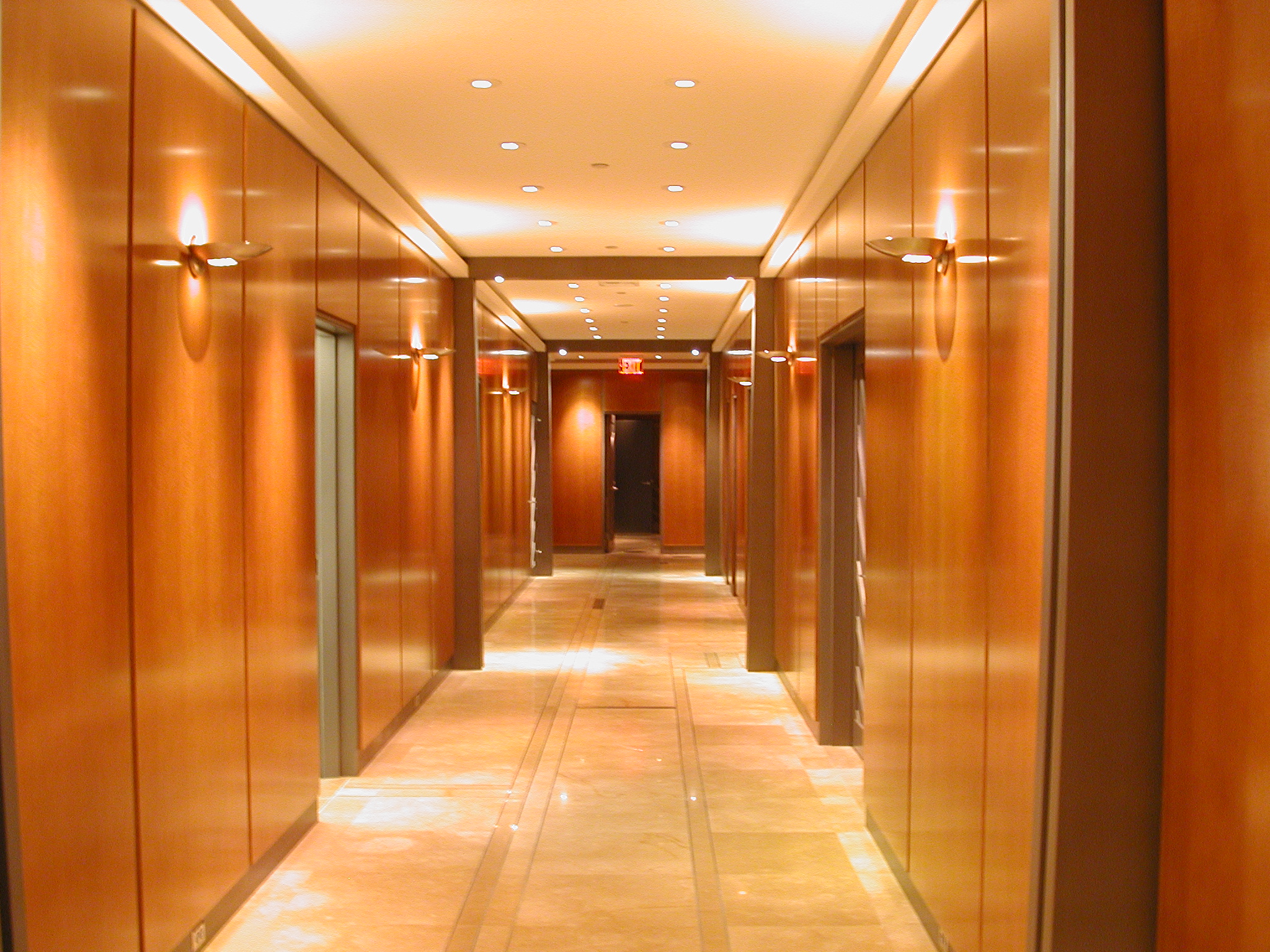 This is part of the hallway of the “COB Wing” — you can see the panels with the special downlighting that were mentioned in the earlier post where the LRH photos were planned to be. They fell by the wayside. 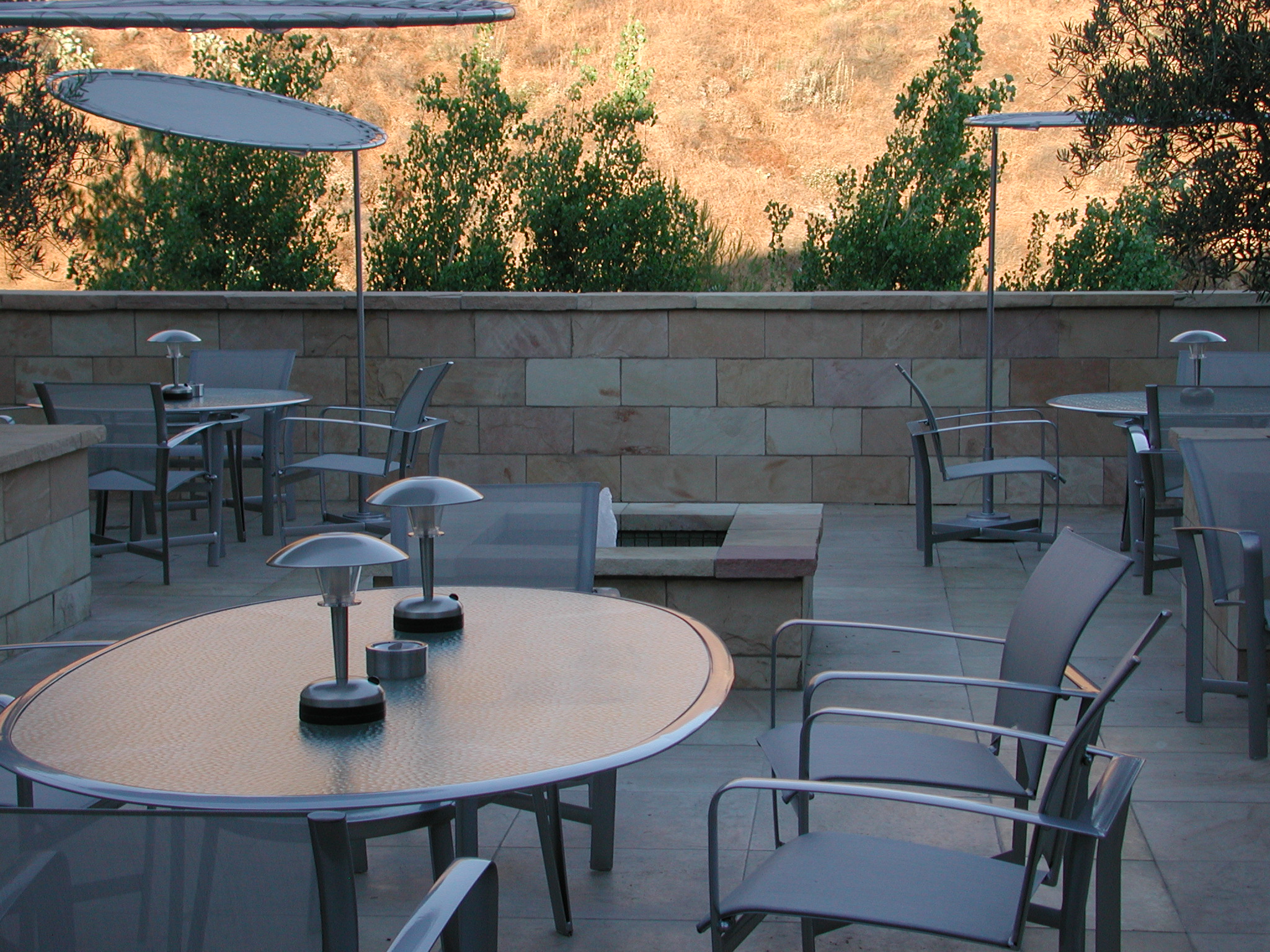 This is the “COB Patio” at the back of the building, which is equipped with cushy outdoor lounge seating (you don’t see here), large umbrellas, fountain/water feature, snack bar, plants and trellis vines, and of course a sound system.

This is exclusively reserved for the use of Dear Leader. 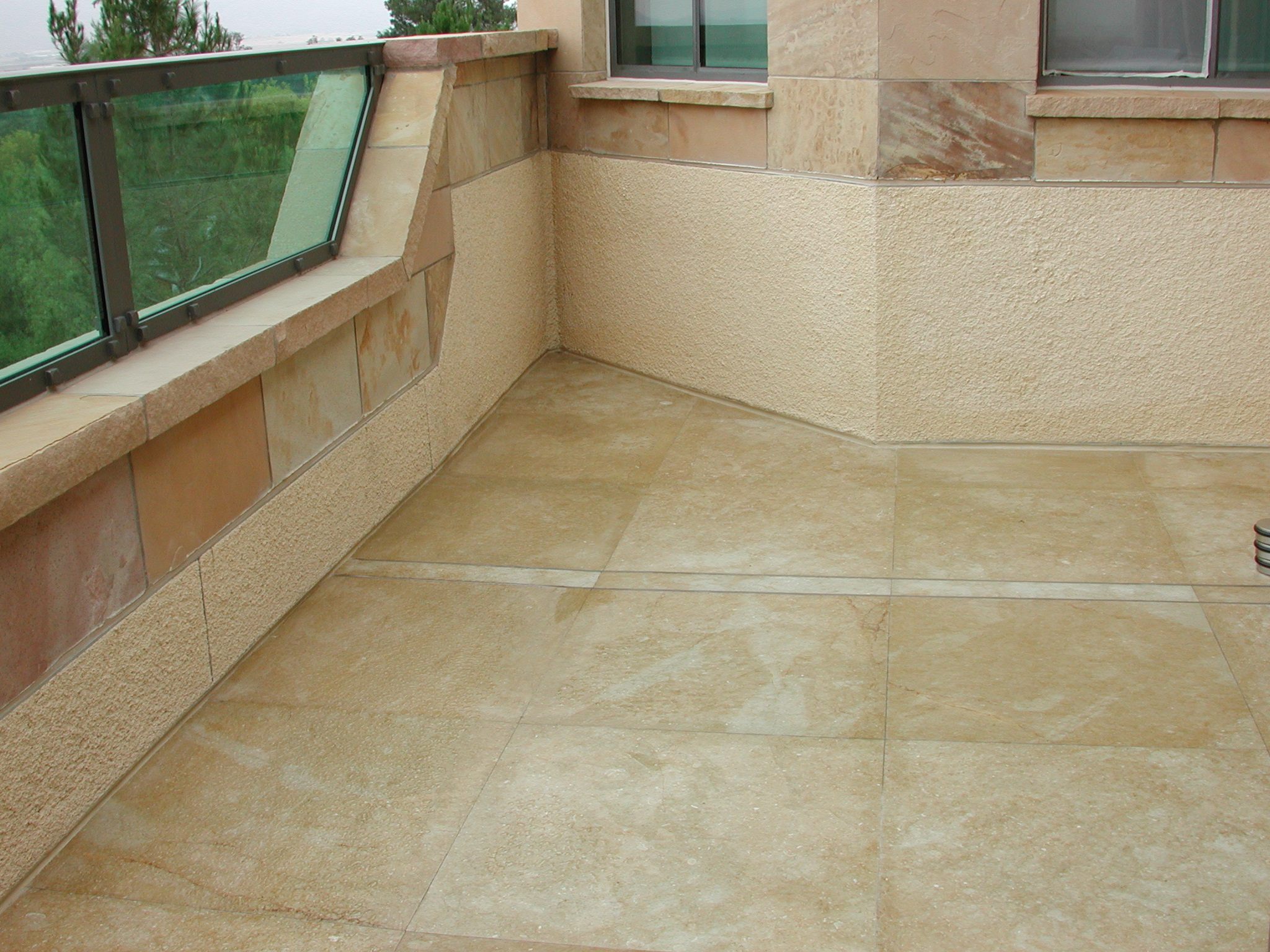 This is the small patio immediately outside his office. It is so he can step outside for a smoke. You can see the bulletproof glass designed to protect him from snipers on the road 200 yards down the hill. 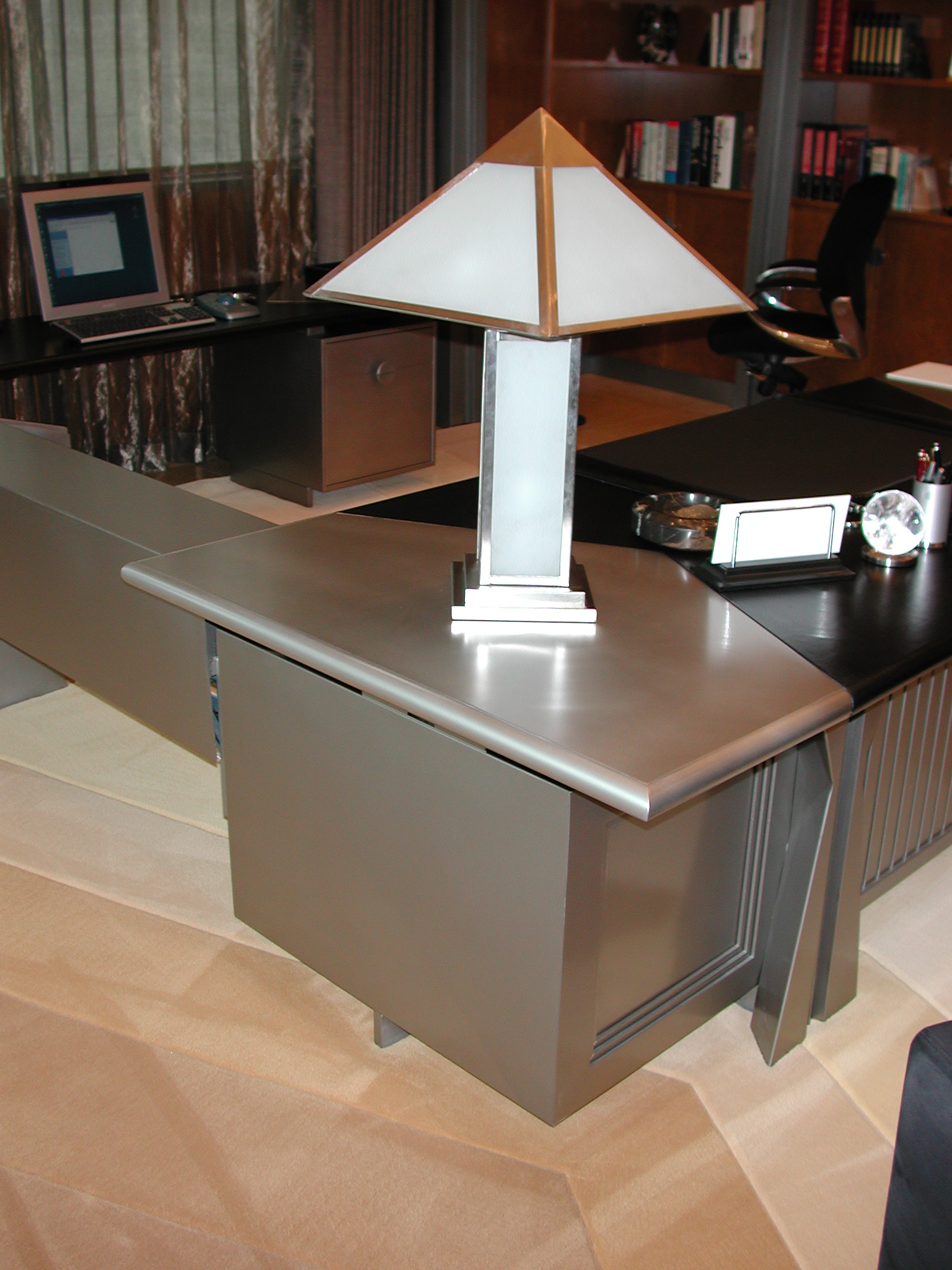 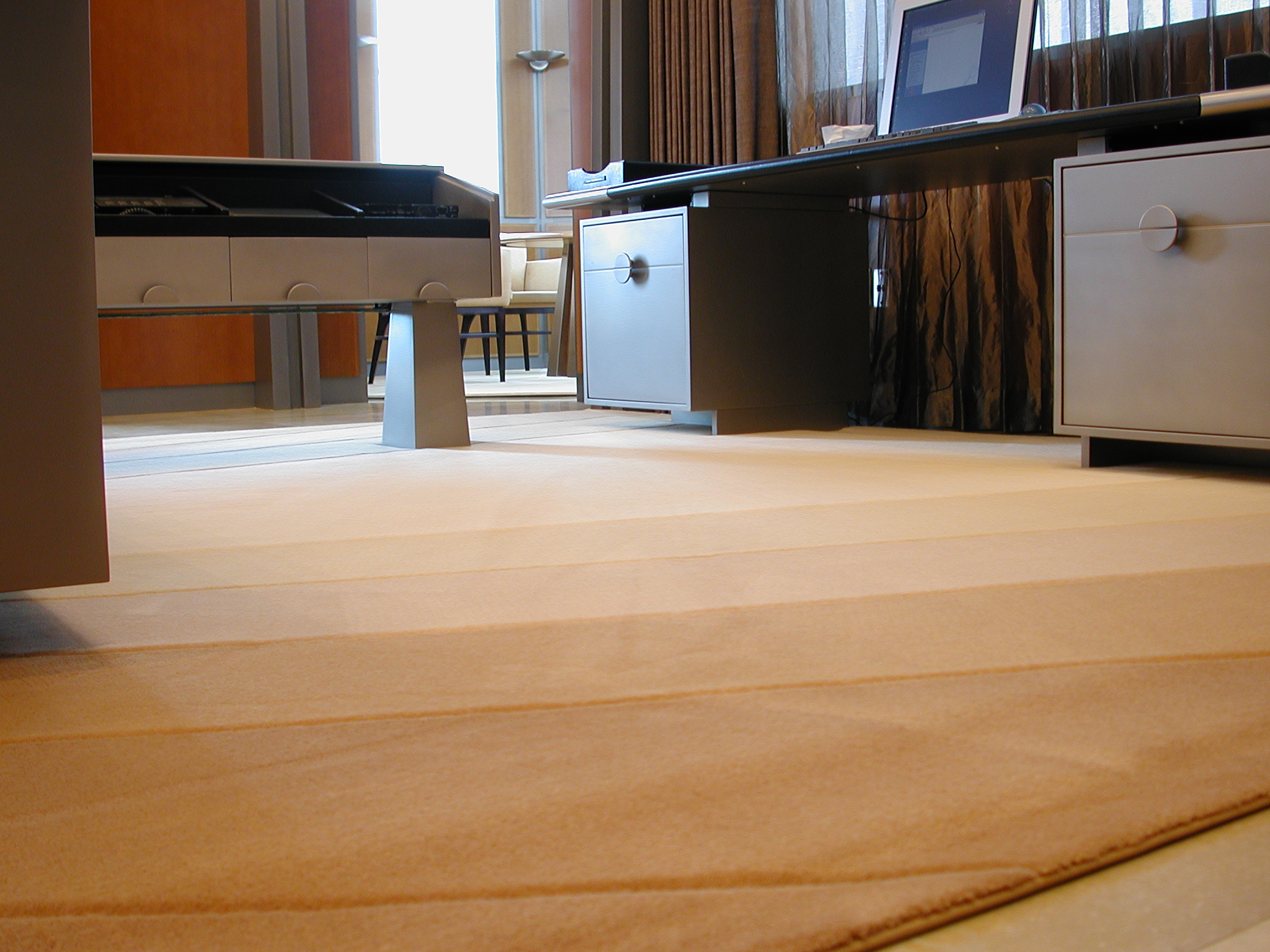 This is the great man’s desk in his office.

The desk design was an intense project. The height was specified to an 1/8″, the return was made to precisely fit about 6 items (phone, dictaphone, a/v controls, etc) and a rolltop cover. All out of steel and leather. No expense was spared, with MANY submissions with drawings and renderings. This final version of the desk cost in excess of $15,000, maybe as much as $30,000.

The rug is a custom designed hand tufted plush wool rug.   Very expensive (8 to $20,000 each). There are 3 of these rugs in his office. One in the turret, one under the desk and one in the lounge area of the office. The rugs also went thru an intense design process and manufacturing.

The windows in his office have 3 layers of treatment: A metallic fabric sheer, a rolldown sun screen and a rolldown blackout. All motorized and controlled by a touchscreen panel. 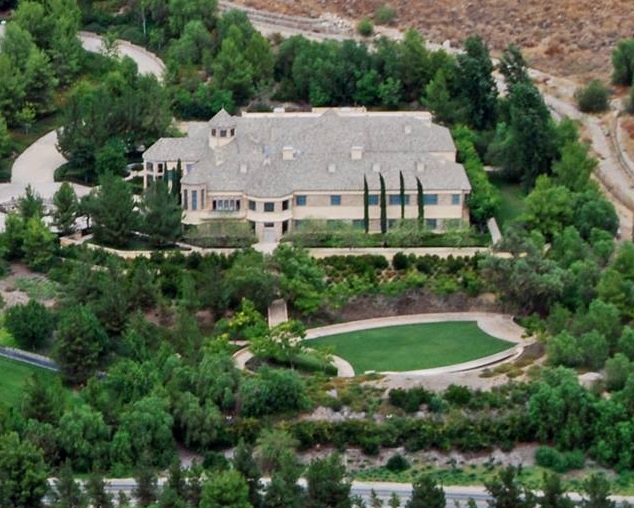 Another interesting feature of Building 50 is the landscaping. The photo above was shot last year by Sinar Parman.  This is 10 years worth of growth, there was nothing there, it was dirt and scrub like you see at the top right of the photo.

Tom DeVocht tells an illustrative story about the landscaping:

One thing that Miscavige made very clear to me even before I left for Int was that Building 50’s landscape was supposed to make it look like a site had been cleared in middle of a thick Scotland forrest and then the building built.

What this meant was that we couldn’t plant small plants that would eventually grow – we needed to plant fully mature plants and trees and a lot of them and of course that is a huge expense.

Even Steve Winn’s landscape architect who had completed half the Vegas strip thought this concept was a complete joke and asked if it was for real. He commented, “Now if you are in the gambling business it might make sense…” but “for an office building in Hemet and in middle of nowhere, HUH!?”. He and I quietly agreed we would never find trees or plants big enough to accomplish this but would do the best possible.

Well, by the time the building was done, there were a lot of plants and trees and they were pretty large. Did it look like Miscavige wanted it? No, of course not.

But here I am, down in “berthing” after having been busted by Miscavige as, “The biggest spender in the history of the church” and one fine afternoon I get called “up the hill” to see him. I’m sure I am going to be yelled and screamed at some more about what an idiot I was to spend this kind of money when, “I repeatedly told you to just finishing it up because I was going to give it to Int anyway, I can’t live on this base full of SPs.”

To my surprise Miscavige was standing outside the building when I walked up. He put his arm around my shoulders and said, “I thought I told you to make it look like the building was built inside a forrest – what the fuck!?” I was dumbfounded – it was one of those moments that you knew no there was absolutely no correct response.

Here he is asking me why I didn’t spent a few million more and in the same breath condemning me for spending the millions I already had.

So, this is where the hard earned dollars of the faithful end up. Lavishing ridiculousness on Dear Leader “because he deserves it.”