Allen Barton’s new play opens on 24 January, the evening before the premiere of Alex Gibney’s documentary at Sundance.

Anyone who does not know Allen, he is a highly acclaimed playwright (I include at the end of this posting some of the many kudos for his last play).

You may recognize his name from this story on Tony Ortega’s blog about Mario Fenninger.

Allen has translated his experience into a new play which promises to be a tour de force.

This is what Allen has to say about it:

DISCONNECTION was inspired directly by my experience with Scientology and its notorious policy of the same name. I was involved with Scientology between 1994-2001 – I found it interesting. I wasn’t brought up with any specific belief system regarding religion, and many of my friends and my mentor at the Beverly Hills Playhouse, Milton Katselas, were themselves Scientologists. I was simply curious. I found nothing objectionable for much of that time – I was treated well, I became something of a ‘celebrity’ for them as I acted in many of their in-house films, and they had a great piano in the lobby of Celebrity Centre that I enjoyed playing.

Toward the end of my time there, I found myself bumping up against “disconnection policy,” whereby Scientologists must renounce their affiliation with those who are deemed to have gone against tenets of the Church or spoken out against it. I had heard about it, even studied some of the references regarding it, but only when I was asked to participate in implementing this odious policy did I finally wake up and decide the whole joint wasn’t really for me. I stepped away quietly.

Subsequently, in 2003-2004, the disconnection policy was applied to Milton himself, by almost all of his Scientologist students and staff, when they decided that he didn’t make the grade in terms of cheerleading for Scientology, nor in how he lived his personal life. I was at ground zero of this seismic shift in his life and the life of the BHP, and was reviled by behavior on display. Still, I remained quiet, as Milton remained true to his personal friendship with Hubbard from the 1960s, and I didn’t think it productive for me, as CEO of the BHP, to make a fuss while he was trying to maintain or even rehabilitate his relationships there.

After Milton died in 2008, I felt more free to speak out. By then I had not only assumed ownership over the BHP as a whole, but I had started reading the numerous books that have been written by former members and staff members of the Church, some of whom I had known personally, and was increasingly shocked and dismayed by the revelations therein. When Lawrence Wright was researching his book “Going Clear,” he asked to interview me about Milton’s journey in the Church and the disconnection that was applied to him, and I granted the interview, which is in the book. This earned me my own “Suppressive Person Declare,” which means that other Scientologists had to disconnect from me for having spoken out against the Church.

Among those who did, albeit unwillingly, was a man named Mario Feninger. Since 1999 or so, I had been a piano student of Mario, a wonderful, sweet guy, gifted teacher, and longtime Scientologist, who was responsible for a huge growth in me as a pianist in my time with him. But in 2013, after I was “declared,” the Church stepped in and ordered him to disconnect from me, and the journey that led me from Curiosity to Disdain finally reached its terminus at Anger. How dare they interfere with the relationship between an elderly teacher and his student? It was beyond the pale. And thus the story for DISCONNECTION came to me.

While the play is based very much on these real events and my real experiences and the research I have done, ultimately it is not about Scientology per se. The word isn’t mentioned in the play, nor is the name “L. Ron Hubbard.” This is because Scientology is just one of many, many controlled-thought systems that have taken hold throughout history, and I wanted the play to be a metaphor for all those systems, and an indictment not just of Scientology’s disconnection policy, but of all of its ancestors, and hopefully, its progeny too.

Here is the press release that has been sent out about Disconnection.

with the WORLD PREMIERE of

Written by Allen Barton and Directed by Joel Polis

Based on true events and today’s headlines, DISCONNECTION is a provocative, powerful indictment of contemporary religious intrusion into personal relationships. Four lives collide: A successful lawyer, his piano teacher and his estranged daughter all confront the dark side of dedication to a Church whose aged founder faces the end of his life in isolation and regret.

“DISCONNECTION was inspired directly by my experience with Scientology and its notorious policy of the same name, whereby members must renounce their affiliation with anyone deemed to have gone against tenets of the Church. After watching this odious policy affect the life of Milton Katselas, my mentor at the Beverly Hills Playhouse, and then experiencing its interference in my own relationship with my cherished piano teacher, I was compelled to write this story. Scientology is just one of many controlled-thought systems that have taken hold to varying degrees throughout history, but the play is designed to be a metaphor for all those systems – not just an indictment of Scientology’s disconnection policy, but of all of its ancestors, and hopefully, its progeny as well.” – Allen Barton (Playwright)

ALLEN BARTON (Playwright) is a Los Angeles-based writer-director and classical pianist. Last season’s Years To The Day attained international critical acclaim after an extended run at the Beverly Hills Playhouse. Allen has written & directed five short films, and his first feature screenplay, REAL MUSIC, was a top-three finalist in the CAPE New Writers Award Competition. He is author of several one-act plays and has earned numerous stage, TV, and film credits as an actor. As a pianist, Allen performed Gershwin’s “Rhapsody in Blue” at the 25th Annual S.T.A.G.E. fundraiser (Wilshire Theatre), was a prizewinner in the 2002 Los Angeles Liszt Society Competition, and has recorded five CD’s (available on iTunes). In 2010 he was made a Steinway Artist. A graduate of Harvard University, his selected directing credits include Speed-the-Plow, Oleanna, The Heidi Chronicles, Engagement (writer), The Interview, The Real Thing, Rabbit Hole, The Last Five Years, and in addition he is the owner and principal teacher at the Beverly Hills Playhouse acting school.

JOEL POLIS (Director) most recently directed Allen Barton’s Years To The Day, and Lynn Manning’s Sympathy for the Devil for the Skylight Theatre Company. Before that, Joel directed the world premiere of Kathy Graf’s highly acclaimed award winning drama Hermetically Sealed (starring Gigi Bermingham) at the Skylight. Selected directing credits include Jerry Lambert’s Straight Time at the Odyssey and Joe Bay’s Last Fling at the Hayworth. An actor-turned director, Joel has over 100 TV and movie credits as well as scores of plays on his resume, most recently Kathy Graf’s The Snake Can at the Odyssey Theatre. He is a graduate of Yale Drama School and USC’s School of Theater.

THE SKYLIGHT THEATRE COMPANY develops and produces new, exhilarating works while nurturing and educating the writers who create them. A vibrant and expanding family of artists giving voice to original perspectives of today’s world, Skylight won 4 Ovation Awards in 2014 for The Wrong Man and Pray To Ball (the most of any intimate theatre in LA) while last year LA Weekly named their productions of Years To The Day, Open House and Sexsting to their Top Ten Plays list of 2013. Skylight’s first year as a company dedicated to developing new plays was 2011, their production of Hermetically Sealed made the LA Times annual list of Top Ten Plays, and Mad Woman moved from Los Angeles to La MaMa in New York. Since then plays developed by Skylight have played Chicago, New York, Edinburgh, Paris and local venues. Twitter: @SkylightThtr, Facebook: Skylight Theatre Company, Instagram: SkylightTheatre

GARY GROSSMAN (Producer/Artistic Director) started his career in New York owning two theaters and a theatrical lighting company by the age of 23. Gary worked at the Public Theatre, Café La Mama, and Sheraton Square Playhouse before traveling West in the 70’s to join up with the emerging theatre moment in Los Angeles. He has produced over 300 stage plays, including more than 50 world pre- mieres. Among his celebrated productions are Years to the Day, Wrong Man, Bulrusher, Hermetically Sealed, Sexsting, Mad Women (Best Solo Performance), Romeo and Juliet directed by Milton Katselas (3 LADCC Awards), Dylan (3 LADCC Awards), Influence, Dream Man, Lone Star, Balm in Gilead, Visions and Lovers, Rabbit Hole, Beautified and La Ronde De Lunch. In addition to his work for Skylight Theatre Company, Gary produced at The Cast Theatre, Director’s Theatre and co-produced The Home-Coming, Endgame, and The Seagull for the Matrix Theatre Company. For television he created and co-produced “Sadie and Son” (CBS- MOW) and the sitcom pilot “Man in the Kitchen” (ABC). He is the Executive Producer for award-winning director Chuck Workman’s documentary, “The Actor’s Life.” Gary most recently directed Quarantine for STC’s LAbWorks.

Here is a bit of information about the last play this same team put together: 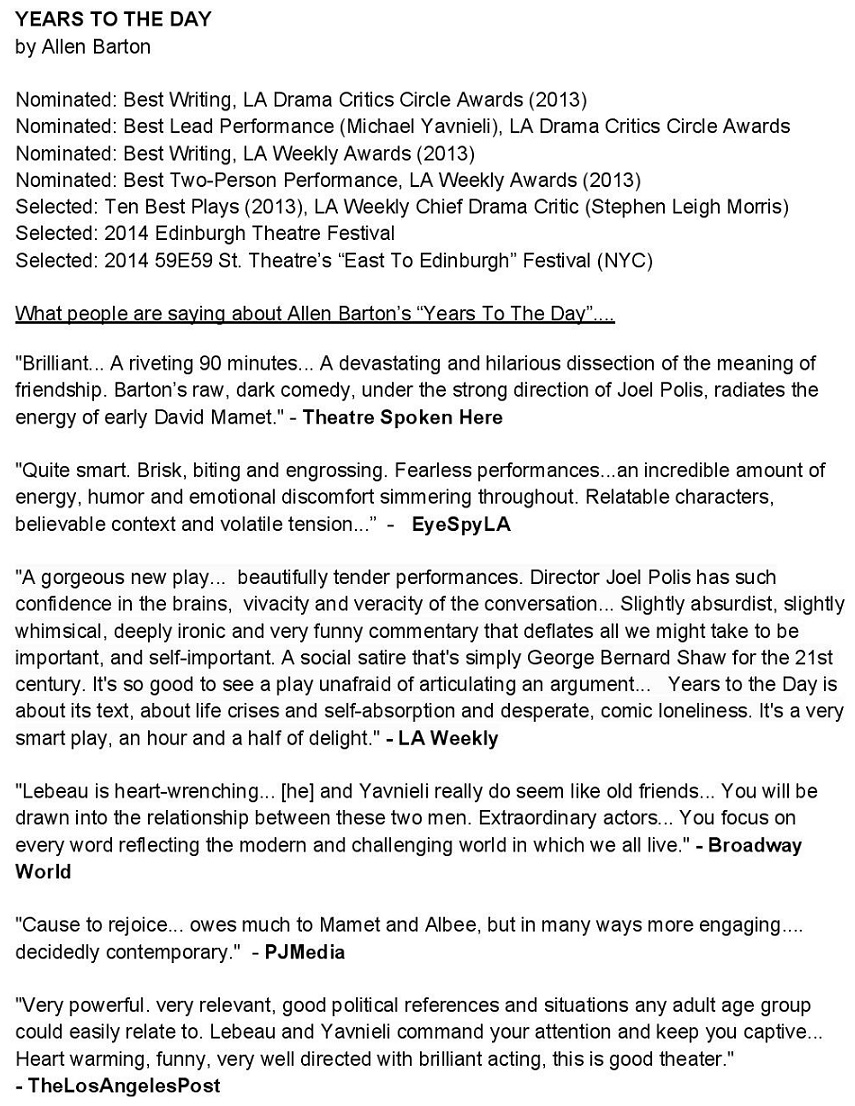 Anyone fortunate enough to be in the LA area during its run should make the effort to support Allen’s art.

As always, the uncaring, heavy-handed actions of the “church” reap their own rewards.

“There is something wrong here.”