An article in THR today: 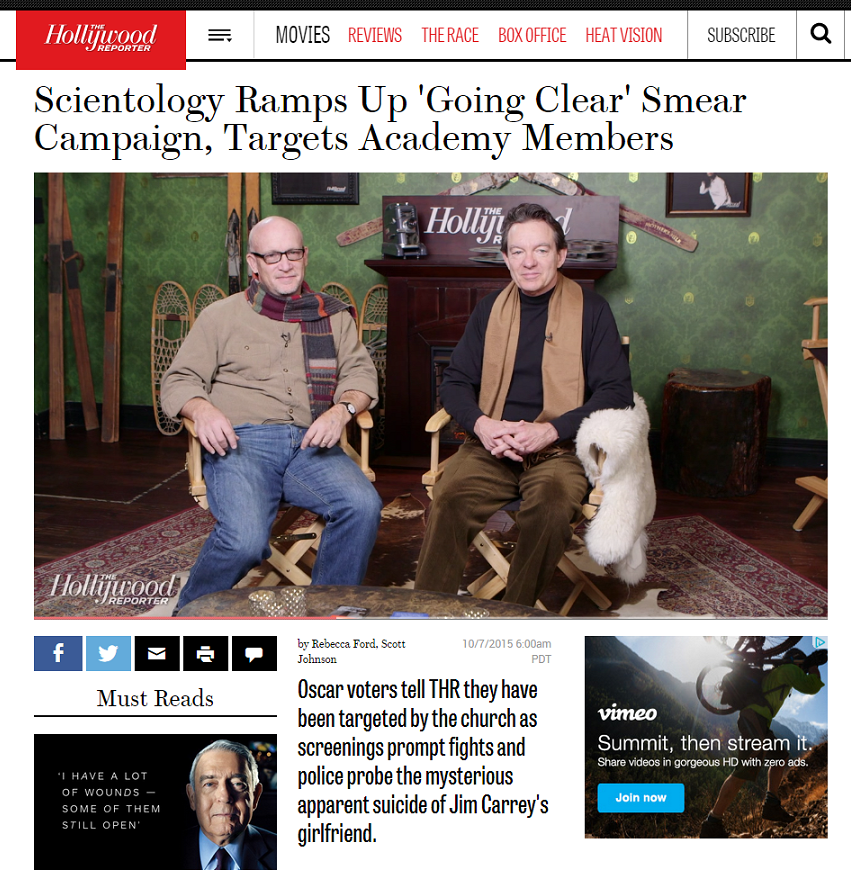 As usual, Scientology is shooting itself in the foot.

They send goons to screenings and have Freedom “reporters” doing clumsy, noisy investigations.

Contacting Academy Members to try and influence them not to vote for Going Clear is such typical ham-fisted Miscavige “PR”.

He never ceases to amaze. HBO should send him a large fruit basket when Going Clear is nominated. And they should take out a full page as in the NY Times thanking him for his contribution if it wins Best Documentary.

And if it does win, and I get a chance to say anything about it, I will personally thank him and Tom Cruise for making it all possible.

Meanwhile, a few selected bits from the article are worth noting (read the whole thing, the article itself in the most influential trade publication is a good indication of how well this stunt is going over).

The Church of Scientology really doesn’t want Alex Gibney to win an Oscar for his documentary Going Clear.

Since the film — a scathing critique of the controversial church and its celebrity adherents, including Tom Cruise and John Travolta, based on Lawrence Wright‘s best-selling book — won three Emmys in September, the filmmaker says he has been the subject of an increasingly hostile harassment campaign that has included a Scientology-backed “documentary” and outreach to members of the Academy’s doc branch, the group that selects the Oscar contenders.

Karin Pouw, a spokesperson for the church, acknowledges that “Freedom has been reaching out for some time for a piece about Alex Gibney’s propaganda film.” But, she says, “this has nothing to do with the Academy.”

Miscave-o-mouth sounds as believable as ever “this has nothing to do with the Academy”? So why are they contacting Academy Members?

On Sept. 28, Gibney was entering the Linwood Dunn Theater in Los Angeles for a talk about his career to the International Documentary Association when a man named Randall Stith approached and told him he was making a movie about him. (According to IMDb, Stith has directed two films: Dead Wrong: How Psychiatric Drugs Can Kill Your Child and Making a Killing: The Untold Story of Psychotropic Drugging. Scientologists adamantly oppose psychiatry and its associated medication.) Stith stayed for the screening of Going Clear, after which he, Taglieri and another Scientologist, Norman Taylor, spoke out during the Q&A session against Taylor’s ex-wife and former Travolta handler, Sylvia “Spanky” Taylor, who appears in the film.

Funny, Randy Stith’s wife is the former DSA LA Org (ditched when the command team came in) and has done a lot of work at Gold. Norm Taylor was part of the USGO back in the heyday with Duke Snider and Henning Heldt. Pat Murray, the cameraman in Palm Harbor was also a former Gold Cameraman. These are just random people…. Riiiight.

“What is clear to us in all of this is that Alex Gibney can dish it out, but can’t take it,” Pouw says. “He’s exceptionally thin-skinned to the point where he tried to censor and shame anyone criticizing him at public events. One would think a documentarian would be more tolerant and open minded.”

This is SUCH a classic Miscavige line. Anyone who knows him will recognize it. The most thin-skinned person this side of Kim Jong Un, Miscavige always accuses others of his own insecurities and failings. What is it that Alex Gibney supposedly can’t take? He responds to these people very civilly. He is polite and engages with them. Which brings up the question — where is Miscavige? He NEVER appears anywhere for anything. Or even Karin Pouw these days. Not seen alive for years now.

At an Oct. 2 screening of the film at the Muvico 10 in Palm Harbor, Fla., less than 30 minutes from Scientology’s spiritual headquarters in Clearwater, a heated exchange took place during a Q&A with former high-level church members Sara Goldberg and Mike Rinder, both of whom appear in the film. Goldberg’s ex-husband and another Scientologist entered into what moderatorMike Deeson calls a “screaming match,” aggressively attacking Goldberg’s and Rinder’s personal lives and saying people in the audience should visit FreedomMag.org to find out more.

“It’s really pretty bizarre to me that they just keep doing this crazy stuff that is such a clear-cut demonstration of the veracity of both Larry’s book and Alex’s film,” says Rinder.

Pouw counters that the church can’t comment on the actions of its individual members, “any more than you can assign to the Catholic Church the protest actions of any Catholic who feels strongly about an issue.” She acknowledges Norman Taylor, whom she calls “a prominent Los Angeles lawyer,” attended the L.A. event and challenged Gibney on why the filmmaker did not “check with him to confirm the lies” Spanky Taylor told in the film.

Hahahaha — this is the funniest line of all. Remember when this was the line they used for the “Squirrelbusters” in Corpus Christi? They maintained that bs all the way til Bert Leahy stepped forth and spilled the beans, the letter from Allen Cartwright was exposed and then Tommy Davis was caught lying through his teeth in deposition about going to try and recover JB. Then scientolo9gy admitted “yes, they were being funded by the church and we did know what they were doing, but it’s “free speech.””

Anyone knows that these actions are not random and uncoordinated. These people would be declared if they were doing this without permission. Going to an SP Film, consorting with SPs in the audience AND generating bad media coverage isn’t looked upon lightly by Mr. Miscavige.

He literally does not know what to do and is flailing around like a fish on a dock.

UPDATE: Just saw another piece on Huffington Post on the same subject. And here is the latest quote from Miscave-o-Pouw;

In an email to The Huffington Post, Scientology spokesperson Karin Pouw described claims of a campaign against the movie as “yet another publicity stunt by Alex Gibney to try to get an award.”

“We know Alex Gibney is obsessed with his awards, but we aren’t,” Pouw wrote. “We wouldn’t even know who the Academy members are. This only proves he can dish it out, but can’t take it.”

Absolutely amazing. THEY send people to screening to create a ruckus and have the Freedom “reporters” doing loud investigations (while not identify where they come from) and then when the media picks up on it they say it a “publicity stunt by Alex Gibney to try and get an award.”  Hahahahaha.

And then the best line of the day “We know Alex Gibney is obsessed with his awards, but we aren’t” — this from the guy who proudly tells the world HE won Ted Koppel an Emmy for interviewing him. And even has it framed on the wall of his office. Talk about obsessed…