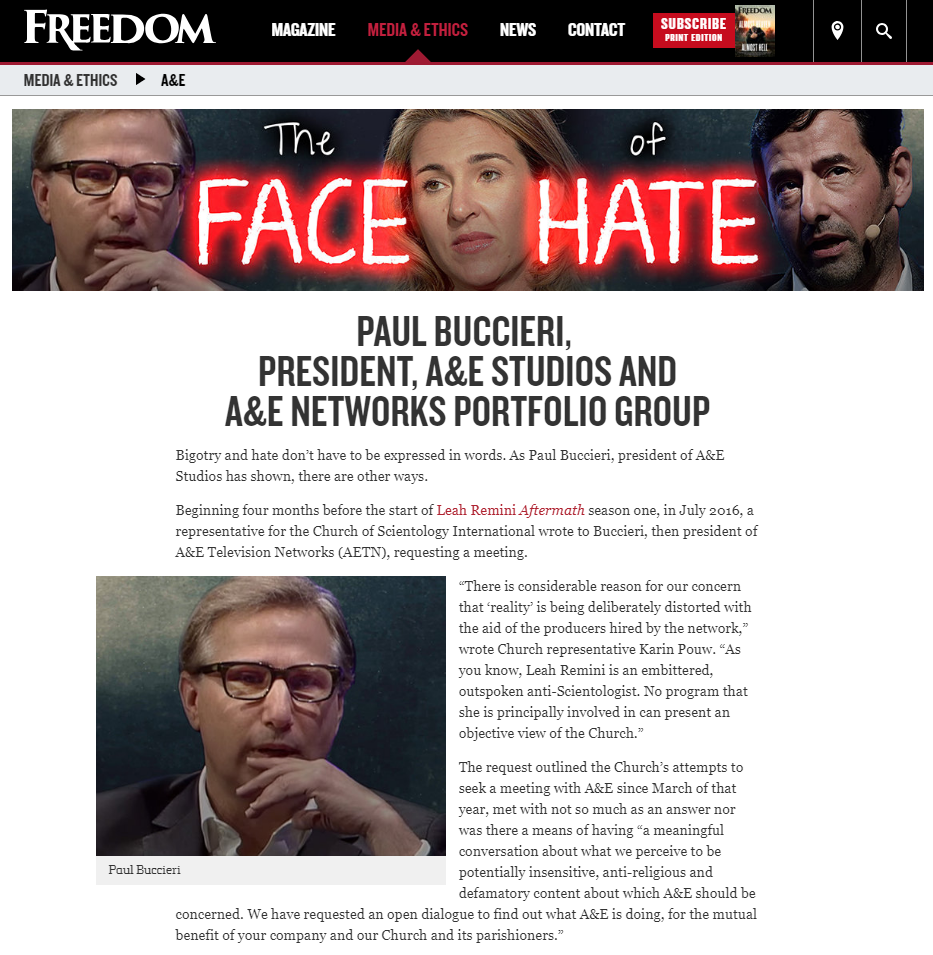 Scientology is shameless. And here is the latest proof.  A new article in “Freedom” magazine they are pushing on Twitter.

More evidence they do EXACTLY what they accuse others of doing, without the slightest embarrassment. This is sociopathic behavior.

Freedom attacks the President of A&E Studios because scientology has been unable to arrange a meeting with him.

“the Church’s attempts to seek a meeting with A&E since March of that year, met with not so much as an answer nor was there a means of having “a meaningful conversation…””

Funny — we have TRIED for 3 years to get anyone from scientology to appear on our show. Nada. Zip. Not a SINGLE person has ever been willing to talk to us. They send threat letters from lawyers. They have even demanded meetings with the production company lawyers, but only on the condition that neither Leah or I would be present. (So much for “confront and shatter”)

The President of A&E Studios is not involved in the day to day production of The Aftermath. At all.

Leah and I certainly are and would be happy to speak with anyone from scientology.

This is a well-worn scientology tactic. It would be like if they didn’t appreciate the service at a local McDonalds and rather than talking to the manager of the store who was there ready and willing, even inviting them to discuss what they thought was wrong, they demanded the President of McDonalds address their concerns in an in person meeting. Then when the President didn’t grant them an audience, they claim it is evidence their civil rights are being trampled. And that is all just a smokescreen to hide the fact they stole someone else’s lunch, trashed the toilet and verbally abused the children in the next booth.

In other words, demand something you KNOW will never happen and then insist that it not happening is “proof” of a conspiracy against you to deflect from your own misdeeds.

Everyone can see through this posturing — EXCEPT scientologists. They are conditioned to accept this sort of thing and it makes perfect sense to them.

They go on with another of their lies:

“The Church has been more than forthcoming in providing valuable information in the past and the Church stands ready to provide accurate information now,” Pouw wrote. “Shouldn’t you be willing to converse with the Church? Or is A&E dead set on avoiding the truth to such an extent that the network is unwilling to meet to hear the truth?”

They have in fact provided nothing other than legal letters with “Dead Agent” packs attached along with photos of “ideal org” buildings as “proof” of their massive expansion. (Even in this Freedom article they cannot restrain themselves from repeating the “D/A” on the Headleys, Tom DeVocht and Amy Scobee as if the entirety of The Aftermath’s 3 seasons was based on what they had to say, or worse that their claims that they were “kicked out” of Scientology (after they escaped) proves they are liars?)

Scientology: We would LOVE to converse with you and hear your version of “the truth” — about The Hole, Shelly Miscavige, missing executives, Danny Masterson, covered up pedophilia, your stance on gays, how you justify the hatred of the Nation of Islam which is now a branch of scientology, your front groups, Miscavige’s lifestyle, the Ranches etc etc etc

But the truth is you actually don’t WANT to “converse” — you refuse to do so, but then claim it is A&E that is unwilling.

Here Karin, let me say it again:  if you (or anyone else) is willing to sit down for a conversation, Leah and I will be there — anywhere and any time you wish.  No need to try to get the people who don’t know involved, come straight to us. I am sure the world would LOVE to hear the conversation. How about it? Name the place and time…

Final thought: The best evidence of David Miscavige’s hand in this piece is the final sentence. Typical condescending, smarmy Miscavige:

Paul Buccieri has apparently been too busy overseeing such culturally relevant programs as Storage Wars, Parking Wars and Dog the Bounty Hunter to reply to these critical matters.