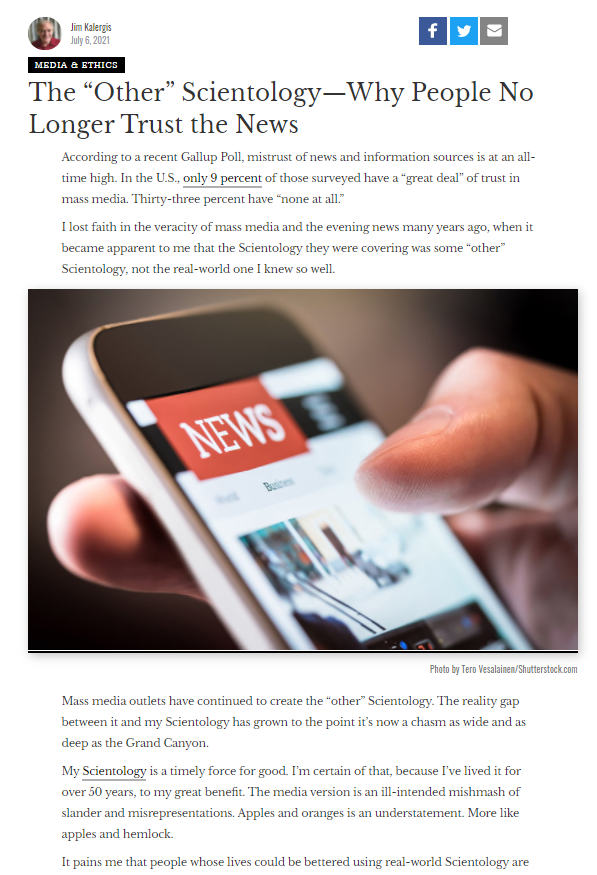 Another STAND League fool offers his twisted take on how scientology is maligned in the press.

STAND League should adopt a new motto for themselves, using the wisdom and words of the Bard himself: Told by an idiot, full of sound and fury, signifying nothing.

Jim Kalergis has been one of the big FSM’s in the LA area for decades. His livelihood depends on people believing that scientology is good.

This guy actually thinks scientologists re in a position to complain about how people don’t trust them media? Wonder what a Gallup Poll would say about the public “trust” in scientology? I would be certain it would be 0%.

But typical of their pretzel logic, they take a supposed to survey saying people don’t trust the media and twist this into a conclusion “therefore what the media says about scientology is untrue.” And the proof? “My scientology is a force for good.” Yep, sure it is. Good for your bank account Jim as suckers are fleeced and you get your commission checks.

This “reasoning” is like a criminal who has committed a crime saying “But a survey said people don’t trust prosecutors, so they must be lying about me and I should be set free.” Talk about apples and oranges Jim.

Here is the first part of his sound and fury, signifying nothing… The rest is just him quoting Thomas Jefferson as some sort of proof that scientology is being maligned. You don’t need to leave much to the imagination to wonder what Thomas Jefferson would have said about scientology had he been around today. This is just one thing Jefferson said about Christianity: “Millions of innocent men, women and children, since the introduction of Christianity, have been burned, tortured, fined and imprisoned. What has been the effect of this coercion? To make one half the world fools and the other half hypocrites; to support roguery and error all over the earth.”  It’s convenient to quote Jefferson (“a man I have enormous respect for”) about how bad the media is and ignore his views on religion. Offering up Thomas Jefferson as if he would be a champion of scientology is a little short-sighted. Seems the Shakespeare quote was on the money: this guy IS an idiot.

The conceit of the idiot who just knows he is right, because his Founder told him so, is something to behold.

Here is Jim in all his sound and fury:

According to a recent Gallup Poll, mistrust of news and information sources is at an all-time high. In the U.S., only 9 percent of those surveyed have a “great deal” of trust in mass media. Thirty-three percent have “none at all.”

I lost faith in the veracity of mass media and the evening news many years ago, when it became apparent to me that the Scientology they were covering was some “other” Scientology, not the real-world one I knew so well.

Mass media outlets have continued to create the “other” Scientology. The reality gap between it and my Scientology has grown to the point it’s now a chasm as wide and as deep as the Grand Canyon.

My Scientology is a timely force for good. I’m certain of that, because I’ve lived it for over 50 years, to my great benefit. The media version is an ill-intended mishmash of slander and misrepresentations. Apples and oranges is an understatement. More like apples and hemlock.

It pains me that people whose lives could be bettered using real-world Scientology are being so horribly misinformed. Perhaps the deception is money-motivated. Good news gets fewer clicks and views than sensationalism and slander. Or perhaps there’s a more sinister reason for the overt deception.

So it’s not surprising another Gallup Poll found that only 28 percent of those surveyed considered journalists to have “high” or “very high” “honesty and ethical standards.” Apparently, it’s not just Scientologists who’ve noticed the current state of ethics in journalism.

Here’s what a man I have enormous respect for wrote on the subject:

“Nothing can now be believed which is seen in a newspaper. Truth itself becomes suspicious by being put into that polluted vehicle. The real extent of this state of misinformation is known only to those who are in situations to confront facts within their knowledge with the lies of the day.”

If you agree with the above, you’re in good company. Those words were penned by Thomas Jefferson in an 1807 letter to newspaper editor John Norvell. Jefferson’s words are as true today as they were in his day. It’s a mistake to blindly accept what’s being presented via newspapers or mass media at face value. We can only know the extent of misinformation in media content if we’ve been in a position to compare our direct knowledge of the facts to their “truth.”

Social media is even less trustworthy. Case in point: last year, as an experiment, I followed up on Facebook memes featuring quotes by our Founding Fathers that appeared to support then-current political candidates or agendas. Out of the 27 memes I researched, 26 were either entirely false, misattributed or grossly out of context. Yet, social media users gleefully hit the “like” button and shared them with their fellows.