They put up the monumental, epic news about the opening of the “ideal” St Hill on the scientology.org website.

And what a doozie it is. 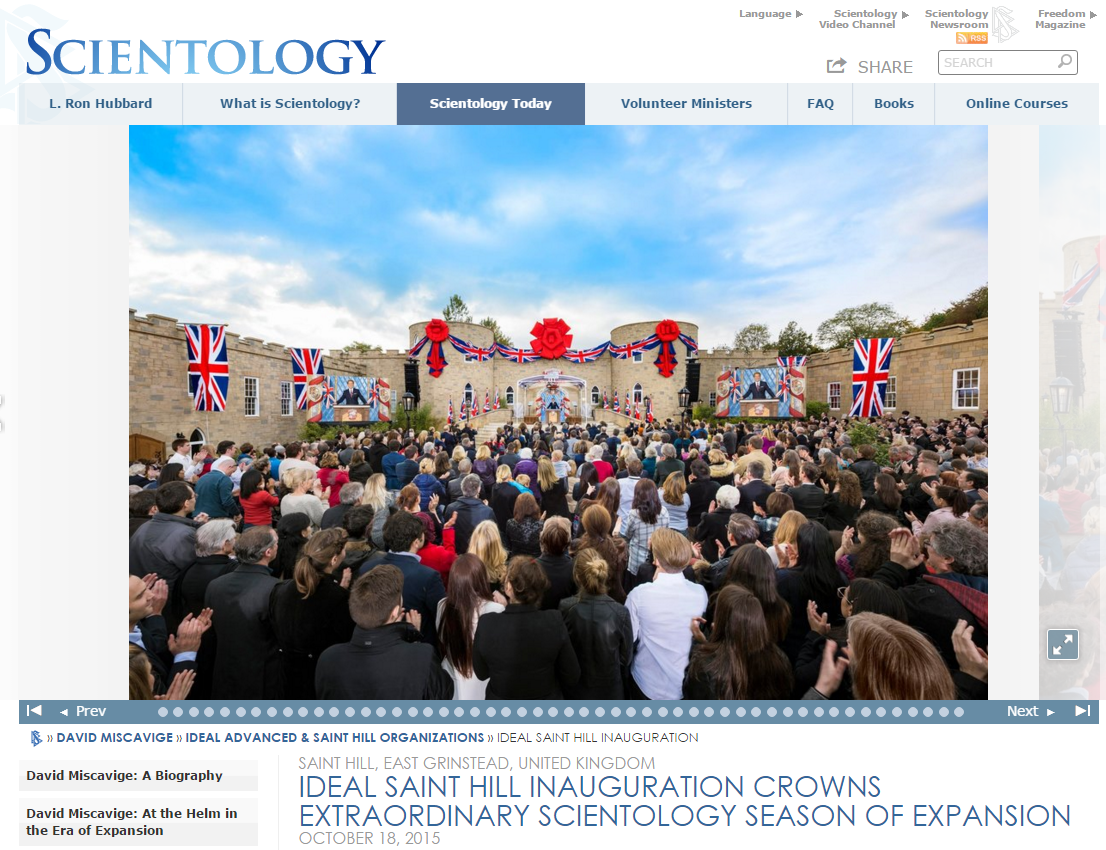 The headline is typical shermanspeak overhype, and the text that follows is every bit as laughable.

The church claims that “more than 2000” were in attendance. If you can find close to 1000 people in the photo above it would be a miracle. More like 500. And you know this was the BEST shot they could come up with.

Here is a small sampling of prolix word salad from the mullet man:

A pivotal moment in what has proved a season of unprecedented Scientology achievement, the Ideal Saint Hill ribbon-cutting ceremony marked the instant when the very essence of what the Scientology religion has become achieved perfect synchronicity with Mr. Hubbard’s revolutionary vision.

I wonder if it is now pivoting down? A “season”?  Like it’s the expansion season before the “contraction season” begins again as part of the annual changing of the leaves?  I guess this is supposed to be poetic? As for the rest of this sentence, it makes absolutely no sense at all. It sounds like the now immortal words of Miscavige when he first appears in Going Clear spouting gobblydegook from the IAS stage about infinity of something or another.

They imported Erin Banks from the US to be the MC. Bob Keenan blew the SO and works for a scientology whale in Brighton. Apparently nobody else in the UK is up to snuff. Of course, the CO AOSHUK is too much of a “DB” in the eyes of Miscavige to be allowed to appear on the same stage…. (though John Danilovich was working with LRH in the Sea Org many years before Miscavige even joined).  Really, there is nobody in the UK that could do the job of reading a prescripted introduction to the great man?

Obviously the words of Erin Banks were not written by her. The shermanspeak syntax is so apparent it’s as recognizable as Elmer Fudd or Daffy Duck. And certainly she didn’t write that Miscavige is “still remembered as the 12-year-old prodigy…”

Ms. Erin Banks from the Church’s International Public Relations Office opened the ceremony, building the suspense while noting, “If Saint Hill is a place so many call home… and if Saint Hill is an Org so many call their Org… well, so it is that these grounds, too, hold an enduring personal meaning for Mr. David Miscavige, Chairman of the Board Religious Technology Center. Saint Hill served as his own training ground as an auditor, and indeed he is still remembered as the 12-year-old prodigy who became its youngest professional auditor. The rest, as they say, is history!”

Yep, history is right. Since he assumed power his “golden ages” have been the Dark Ages of scientology. And it is funny how they are now rewriting the history of Miscavige’s early years in the fine tradition of L. Ron Hubbard’s hagiographies that painted him as a child prodigy too.

Then the great man spoke, and as is so often the case, he made absolutely no sense.

Mr. Miscavige then took the stage, offering a warm and spirited welcome to those assembled for the dedication. “Today it’s not only a new Ideal Advanced Org and Saint Hill for the UK, but all Saint Hill in totality and reflecting exactly what LRH always wished for,” Mr. Miscavige said. “His dreams, his vision and his plans—all are now fully and resoundingly done.”

Wow, that’s quite a statement. If all his dreams, visions and plans are fully and resoundingly done then he really sucked. What a vision this is — an empty building.

After delivering a vivid description of the fully restored and expanded Ideal Saint Hill facility, Mr. Miscavige continued, “Yes, this is our history. This is Saint Hill. And, this is what lives on today at this Saint Hill Base—the jewel of our Scientology crown.” Moments before cutting the ribbon on the stunning property, Mr. Miscavige boldly declared, “I hereby dedicate this new Ideal Saint Hill in the name of L. Ron Hubbard and the Bridge he built to Eternity!”

I wonder if Flag knows that St Hill is now the jewel of the scientology crown?

What would really be bold would be if Miscavige would appear in public for a Q an A with the press.

But more to the point, what is all this construction and “idealification” that has been done?

You can look through the photos on the website. There appears to be ONE newly built building next to the castle (AOSHUK). Everything else is cosmetic, furnishings, with perhaps the back door of the “Great Hall” expanded.

And what does this new building house? 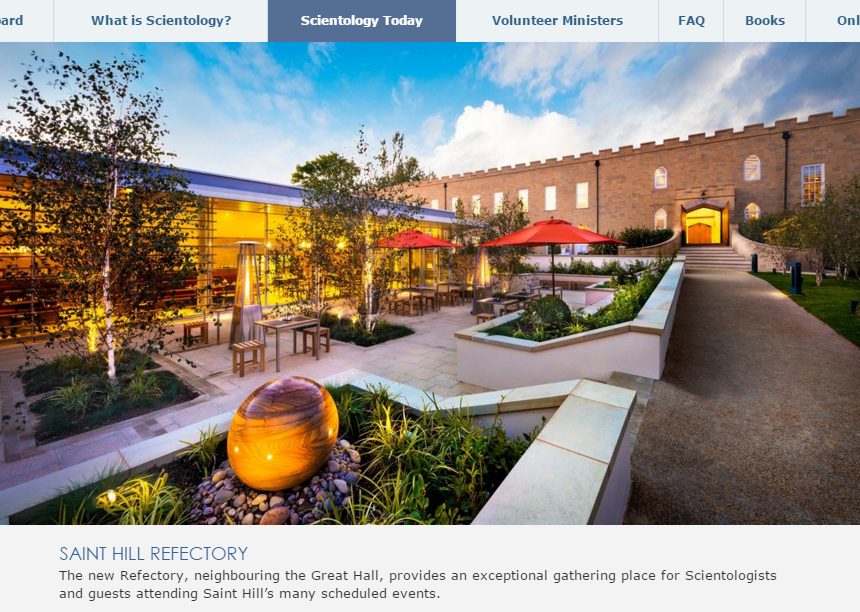 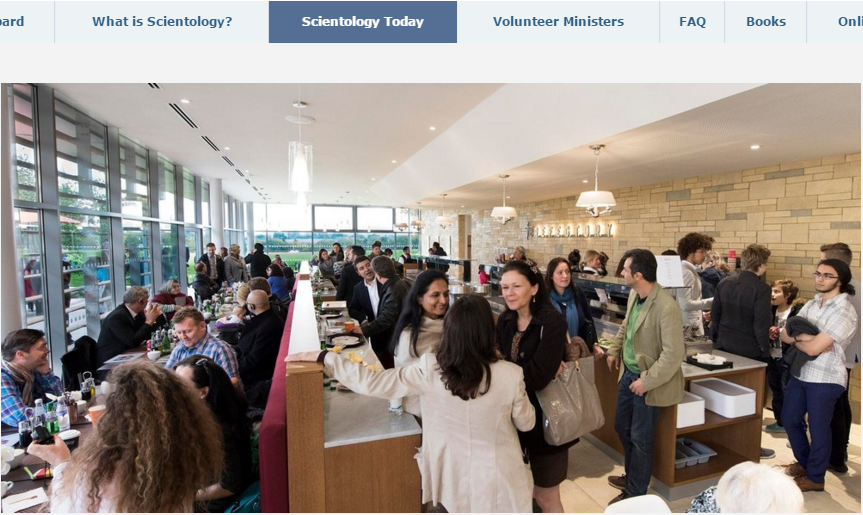 Cafeteria interior – this really is the crowning achievement

This must be the “vision” of L. Ron Hubbard Miscavige was talking about. St Hill as a tea room!

Just to be sure nothing else sneaked in here, you can see the aerial shot of the property below.

The red circle in the bottom left is the refectory.

I also circled in red a small section at the top left. Appears to be more auditing rooms tacked onto the back of the castle, though they are not mentioned. No big surprise when they cannot fill even half the auditing rooms they already have. 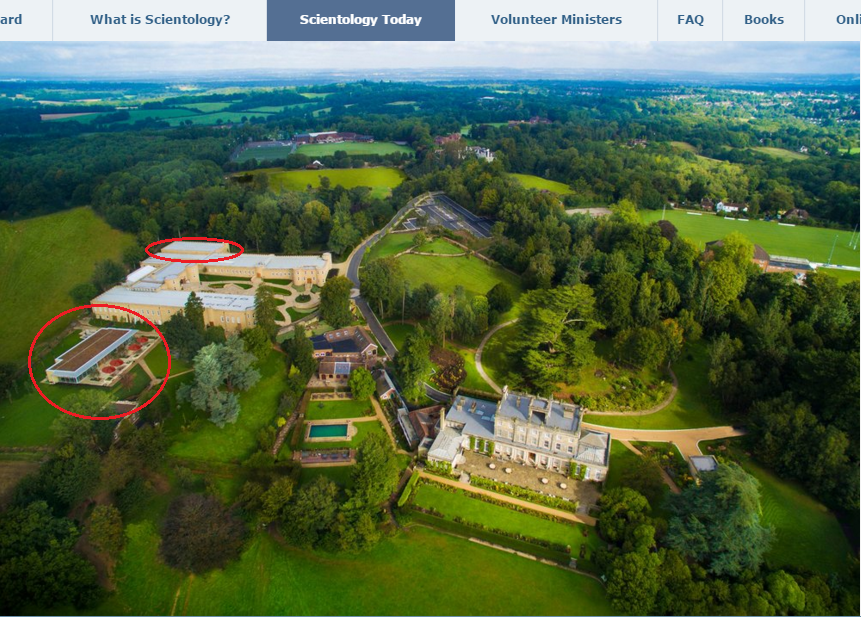 All this hype and fanfair for a new cafeteria?

Yep, in desperate times like these, anything is good enough to be the pivotal turning point in the scientology “season of expansion.”

And yes, for those who may be unfamiliar with these sort of activities in scientology — they are totally serious.

Much self-congratulatory back patting accompanied this wondrous occasion and they are convinced everyone who reads this drivel will be impressed beyond words at the magnificence of their accomplishments.