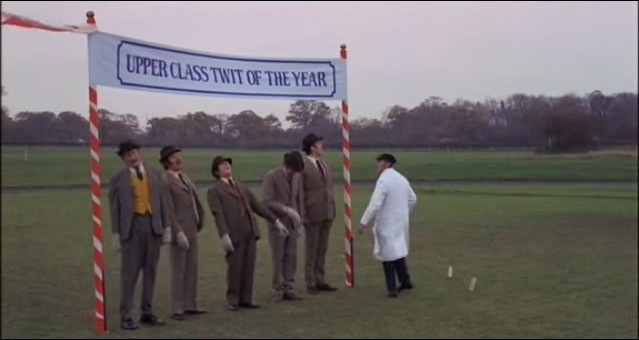 OK, I have chronicled some pretty strange things on this blog, but I believe John Mappin has now succeeded in ascending to the pinnacle of arrogant foolishness. He has overcome all competitors and stands alone as the most out of touch and bizarre example of the effects of scientology KoolAid.

Below you will see a screen shot of his facebook page and I then reprinted his entire Facebook posting below, highlighting in red some of the more bizarre things within it and including a few parenthetical comments of my own in blue.

He is apparently someone the church of scientology is proud to have representing it and acting as an international blathering spokesman for the upper class of earth. 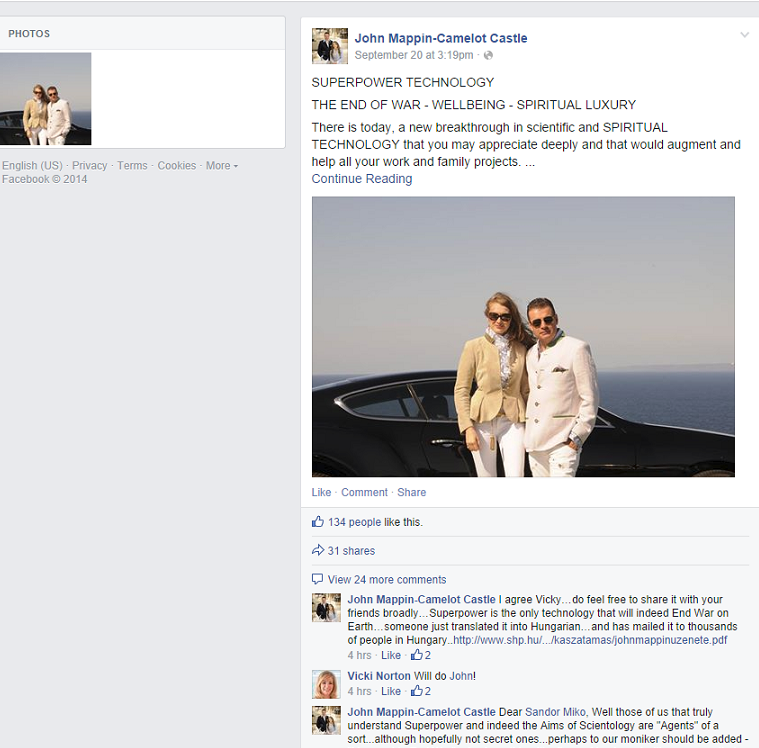 There is today, a new breakthrough in scientific and SPIRITUAL TECHNOLOGY that you may appreciate deeply and that would augment and help all your work and family projects.

In November 1991, our family was shown the scientific research that the founder of Scientology L Ron Hubbard (see www.lronhubbard.com) had done, and was entrusted with knowledge of a new breakthrough that is most extraordinary.

In some parts of the world the idea that the spirit is eternal is not a new one, but in the West this has not been a predominant idea in the modern culture.

The first glimpse of Hubbard’s spiritual genius and his extraordinary research was in a 1938 thesis – “EXCALIBUR” which was never published. He withdrew it from circulation after very few people had read it. I have only seen fragments of that document.

With that obtained knowledge of HOW and WHERE the mind files memory he developed a technique and a technology to refile mis-filed memories and this resulted in him being able to resolve unwanted conditions, such as depression , and many others, without using drugs.

He released this broadly to the public in a book – Dianetics – on May 9th 1950 (see www.dianetics.com) this book was extremely popular and of course flew into the commercial teeth of the vested interests that were profiting from the sale of drugs to handle certain unwanted conditions.

Ignoring the noise created by this release, he continued to research. He made a fresh breakthrough in 1951-2 when he demonstrated that an individual’s memory predates the human body, again not a new idea in some parts of the world.

What was new was providing the scientific tests and evidence and proof of past lives and making that research available to all.

It transpires that memories from earlier lives can mis-file too and that refiling them or “Clearing” them can greatly increase a person’s IQ their memory and their personal ability.

From 1951-1965 he polished up his research and improved it and made it available to all and this has been broadly available to anyone in any Church of Scientology since 1965.

Due to the threat of loss of revenue by the medical and psychiatric establishments and other material interests who saw in his technology an end to their monopolies, mainly in the US and in England, a negative propaganda campaign was launched using media, fairly early on, in late 1950 in fact, to discredit Hubbard and Scientology – so – you and I are supposed to have a view of him and his research that is not entirely constructive.

In fact millions of dollars have been spent to create a negative impression in the media about Hubbard and Scientology and indeed to ultimately prevent or hamper me from having this communication with you.

But Hubbard, on the whole, ignored all that and continued with his research.

In 1976 he discovered that there is one type of memory, that when mis-filed, precipitates WAR. [Huh?]

It is in fact the root cause of WAR on Earth.

It is a mis-filed memory of injustice.

He made, at that time, a second discovery that man did NOT have five senses – Sight – Touch – Taste – Hearing – Smell. Hubbard demonstrated that Man in fact has 57 perceptions as a spirit and that each one of these can be identified, differentiated and fully rehabilitated back to native state.

While man has been writing for several millennia about a “Fall from Grace” Hubbard discovered what caused the fall and developed a technology to reverse it.

Making possible a total rehabilitation of the SUPERPOWER of a spirit.

Hubbard combined these two discoveries and earlier breakthroughs and developed technology to rehabilitate each of these perceptions and to refile the mis-filed memories of injustice as analytical thought. [I guess he thinks there is engram running on the Ethics Repair List?]

He called this breakthrough “SUPERPOWER” and it is a light speed advance on anything that he had discovered prior to 1976.

Hubbard realised that with this NEW technology that delivered the potential to actually END WAR on Earth, certain requirements and strategic factors would need to be in place prior to its release. [No idea what this is in reference to? But somehow he seems to now go on to claim that this is why he bought a castle/hotel?]

In 1991 I was one of the very first Europeans to be shown SUPERPOWER technology and to be briefed on what it could do.

To give you a comparison of the technological advance that it represented, it was like being given advance knowledge of the Internet in 600AD. [Wow, I thought I had heard the ne plus ultra of hype, but this takes the cake]

We bought Camelot Castle in 1999 because we knew that SUPERPOWER would be released in the future and we wanted a location where we could present this breakthrough to spheres of influence. [Riiiiight….]

People whose decisions effect thousands, if not millions, or indeed even billions of people.

So for over 23 years my family and I have been helping do our part to prepare for the release of SUPERPOWER to Earth. [And you did that how? By buying a castle in the south of England — this guy really IS trying to be like L. Ron Hubbard]

The logistics of such an undertaking are almost unimaginable and full credit goes to David Miscavige, the current head of the church, who was entrusted by L Ron Hubbard with that job. ( see here http://www.scientology.org/david-miscavige.html)

For example it required the technology to be translated into 50 languages in what became the largest translations project in man’s history. [Who knows what he is talking about? Nothing to do with Super Power even though it is “for example”?]

It also required that delivery facilities be opened in every major city. (see here http://www.scientology.org/churches/churches-of-scientology.html) [Huh? Also nothing to do with Super Power even though it’s an “also”]

To deliver SUPERPOWER itself requires a much bigger facility and so over the last few years we have been helping with the construction of what is effectively a city with a huge SUPERPOWER delivery facility at its centre.

Much of downtown Clearwater in Florida near Tampa was acquired ( about 56 buildings), and we built what has become known as the FLAG Building. Our family has helped with this. [Bet the City of Clearwater would LOVE to read this…]

I am delighted to tell you that on the 17th of November 2013 the SUPERPOWER building opened and immediate delivery of Superpower commenced. Today nearly 1000 people have now received SUPERPOWER. ( You can see that building herehttp://www.scientology.org/david-miscavige/flag-grand-opening-new-scientology-spiritual-headquarters.html?link=body-title)

It may interest you to know that the entire subject has been translated into Mandarin Chinese and we have opened a state of the art facility in Taiwan. [We? OMG this guy has serious hallucinatory cause issues]

You can see that here (http://www.scientology.org/david-miscavige/grand-opening-church-of-scientology-kaohsiung.html).

This technological release is absolutely vital to mankind at this time.

Firstly, THE END OF WAR, injustice and hostilities on Earth is entirely to the advantage of mankind. A culture does not flourish in war torn economies and lands.

When Superpower and indeed Scientology is delivered in a city, the economy of that city and country stabilises and flourishes. [LOL — name a single one]

It calms the environment and the people flourish in their lives.

Secondly over the coming months and years the experience of receiving SUPERPOWER will become the most sought after SPIRITUAL LUXURY experience for the super affluent and appreciators of the finest qualities of life. [Well, this is probably true as they are the only ones who can afford it — but this guy is SOOOOO elitist he is giving upper class twits a bad name]

The more able and intelligent a person is the more they appreciate Superpower.

In a few years demand for Superpower and the other ability raising technologies of Scientology, by the highly intelligent and upper echelons of the able, will have increased to the point where spiritual enhancement and restoration of abilities become as natural and as in demand as visiting a spa or indeed experiencing a few days of alpine skiing…it represents a new level and quality of spiritual Wellness that has never before been available.

The unanswered question for many as to what happens to a person when the body dies is something that a person wants an answer to, and this technology answers that question accurately and delivers total scientific certainty of a person’s immortality to the person themselves.

It also delivers total recall (memory) back to the person.

Not just for the current lifetime but for all the earlier lifetimes that a being has lived. [Would really enjoy quizzing him on his total recall of this and all previous lives]

There are other spin off advantages which I am sure with your mind you can extrapolate.

They are very interesting indeed – not least for those with Empire. [Maybe you can recall the term “snobbish asshole’]

It is clear to me that you probably have a greater understanding of a spirit’s appreciation of excellence in all things than many in our world. [Obviously, being one of the privileged class like me that inherited wealth]

SUPERPOWER apart from being a spectacular new technology is an extraordinary luxury.

It is our honour to be able to let you know about it.

An end to war, after all, is extremely desirable to the goodness that lies within us all.

All the very best

Here is what is so sad.

A normal person reading this would think to themselves this guy is a couple of sandwiches short of a full picnic. But these statements (usually not so blatantly expressed) ARE how scientologists are taught to think. And they see nothing wrong with them. There are plenty of comments under his posting agreeing with him and congratulating him.

Here are the top of the comments in response — 139 “likes”, 32 shares and dozens of fawning comments (BTW, check out his response concerning his new Bentley — obviously he has NOT given enough to Super Power and Ideal Orgs and everything else — big mistake to make this known publicly). 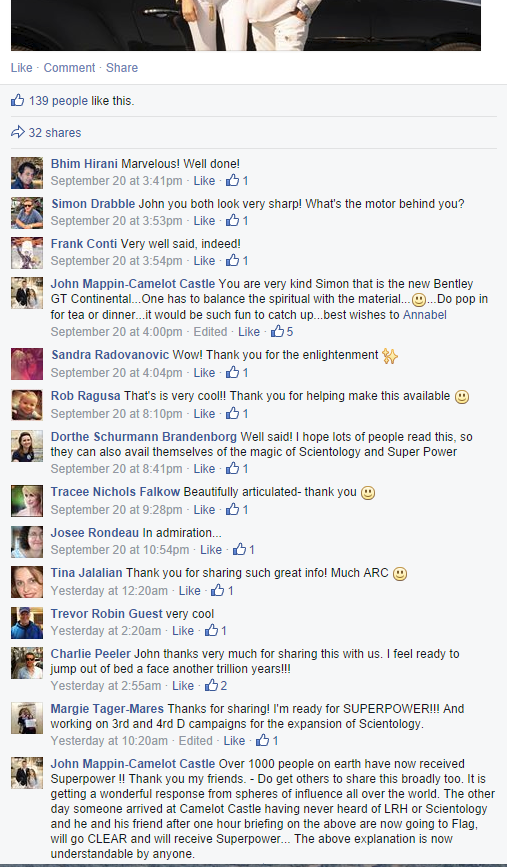